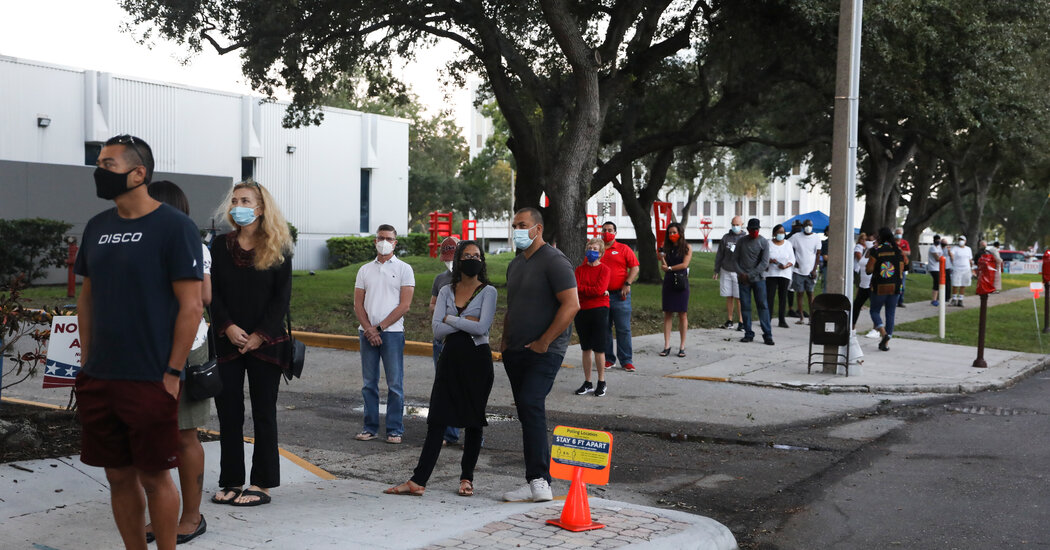 Law enforcement officials in St. Petersburg, Fla., said Thursday that they would station deputies at five early voting sites as a precaution, the day after two armed men dressed as security guards were seen at a campaign tent outside a polling station.

The men told a law enforcement official that they had been hired by the Trump campaign to provide security, said Deputy Chuck Skipper of the Pinellas County Sheriff’s Office. But the county sheriff, Bob Gualtieri, said that he had “absolutely no confirmation” that the men had been hired by the campaign. The men said they were guards for a Florida-based security company, Mr. Gualtieri said.

Thea McDonald, a spokeswoman for President Trump’s campaign, said in a statement, “The campaign did not hire these individuals nor did the campaign direct them to go to the voting location.”

The men’s presence came at a time of tension and fears of unrest at the polls after the Trump campaign’s promise to send “an army” of poll watchers to voting sites. During the first presidential debate, Mr. Trump urged supporters to “go into the polls and watch very carefully.”

Mr. Gualtieri said that while the men might have made some voters feel uneasy, they had not violated laws.

“All of a sudden two people arrived, they were wearing tan khaki pants, they had on blue polo shirts with a security guard insignia on them,” Mr. Gualtieri said. “They were also armed and they were wearing gun belts and they had firearms. That caused some concerns because of the heightened awareness.”

But he added: “Their mere presence does not constitute voter coercion or intimidation. Some people may see these people here and it doesn’t give them a great feeling. On the other side of the coin, it may give others a good feeling, because they feel protected.”

The League of Women Voters immediately expressed concern that the presence of deputies at polling sites could itself deter voters from appearing, noting a history of barriers to voting in St. Petersburg.

“While in intention it is really meant to make voters feel at ease, given the events yesterday, it isn’t necessary for law enforcement officers to be inside polling places,” said Linsey Grove, the organization’s local president.

The head of the security company that employs the men, Syotos, which is based in Crestview, Fla., attributed the episode to a misunderstanding involving an off-duty employee. “We had an off-duty employee who was picking up a family member who happened to be in the vicinity of a polling location,” the chief executive of Syotos, Trei McMullen, wrote, saying that the employee was “in no way engaging in poll watching.”

In another Florida incident, in Miami-Dade County, State Attorney Katherine Fernandez Rundle said on Thursday that her office would look into the case of a Miami police officer who wore a face mask with a profane pro-Trump slogan to an early voting site on Tuesday while in uniform. The department has said that the officer, Daniel Ubeda, will be disciplined.

In Trump Donations, Big Tax Write-Offs and Claims That Don’t Always Add Up

Despite Everything, Bernie Sanders Still Believes