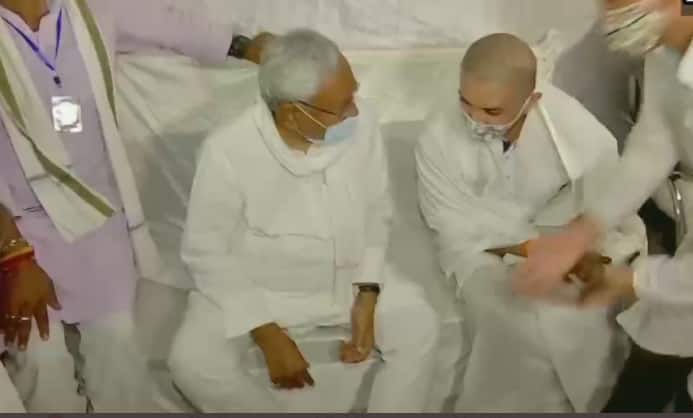 New Delhi: Lok Janshakti Party Chief Chirag Paswan Monday (October 26) hits out at Bihar Chief Minister Nitish Kumar over the implementation of prohibition laws in the state, accusing the CM of gaining from smuggling of liquor into the state.

The LJP Chief also alleged corruption in Nitish Kumar’s ‘Saat Nishchay’ (seven resolves) scheme and said if voted to power he will get it probed and send to jail those found guilty, including the chief minister.

“Why not, if found guilty. Just because he is a chief minister he won’t go to jail? Corruption is taking place right under his nose, Chirag told PTI-Bhasha over phone from Arwal, when asked if he indeed intends to send Kumar to jail on the charge of corruption in the implementation of seven resolves.

Chirag Paswan is quoted as saying, “Saat Nishchay is a scheme formulated by him. We will get it probed after an LJP government is formed. And if found guilty, the chief minister will also go to jail.”

He also flayed Nitish Kumar over the prohibition laws, and tweeted that “innocent people in the state were being implicated through a liquor ban so that anyone who spoke against the ‘satta’ could be imprisoned by being made a ‘liquor smuggler’.”

Talking to reporters at Patna airport before flying for his election rallies, Chirag said, “12 crore Biharis, including ministers in his cabinet and media persons, know about widespread corruption in implementation of seven resolves”, alleging that illegal trade in liquor is rampant in the state due to patronage of the bigwigs in the Nitish Kumar’s government.

Chirag asked, “Why doesn’t he gets this inquired too?” Making serious charge on Nitish Kumar, the LJP Chief told PTI-Bhasha from Arwal, “he is promoting smuggling of liquor during prohibition and a fat sum of money from this illegal trade is going in his pocket for furtherance of his political ambition.” Notably, Bihar was declared a dry state since April 2016.

He alleged that the chief minister “lied” to Prime Minister Narendra Modi that he has been able to build drainage and streets and provide piped water to everybody in the state, adding “The chief minister says there is no corruption in Bihar, whereas the corruption in Saat Nishchay is the biggest in the history of Bihar.”

“Therefore, we have mentioned in our Bihar First Bihari First vision document that when voted to power we will identify those involved in corruption in Saat Nishchay and send them to jail, whether a small officer or the chief minister himself,” he said at his Nokha rally in Rohtas district,

During the 2015 assembly election campaign, Nitish Kumar had announced the Rs 2.70 lakh-crore ‘Saat Nischay’ scheme for Bihar’s development. The Bihar Cabinet had in February 2016 given nod to implement the scheme over five years.

The scheme aims at making younger generation self- reliant through education, skill development and education loan, besides providing electricity connection to all villages, piped water to every household, and road and drainage in urban areas.

On the other hand, the Chief Minister has refrained from reacting to allegations of Chirag. But, his partymen and the NDA ally Hindustani Awam Morcha (HAM) hit back at the LJP chief.

Former chief minister Jitan Ram Manjhi’s headed HAM said, “You (Chirag) are a ‘videshi chiriyan’ (foreign bird) who is seen in Bihar only during election. Before claiming yourself ‘yuva Bihari’ you should know about Bihar.”

Taking a jibe at Bihar CM Nitish Kumar today, RJD leader Tejashwi Yadav said when the present CM could not provide employment and set up industries in last 15 years what would he do in the next five years.

Tejashwi said things were better for the poor under his father and former CM Lalu Yadav.

Diana Taurasi Is Still Living Up to Her ‘White Mamba’ Nickname