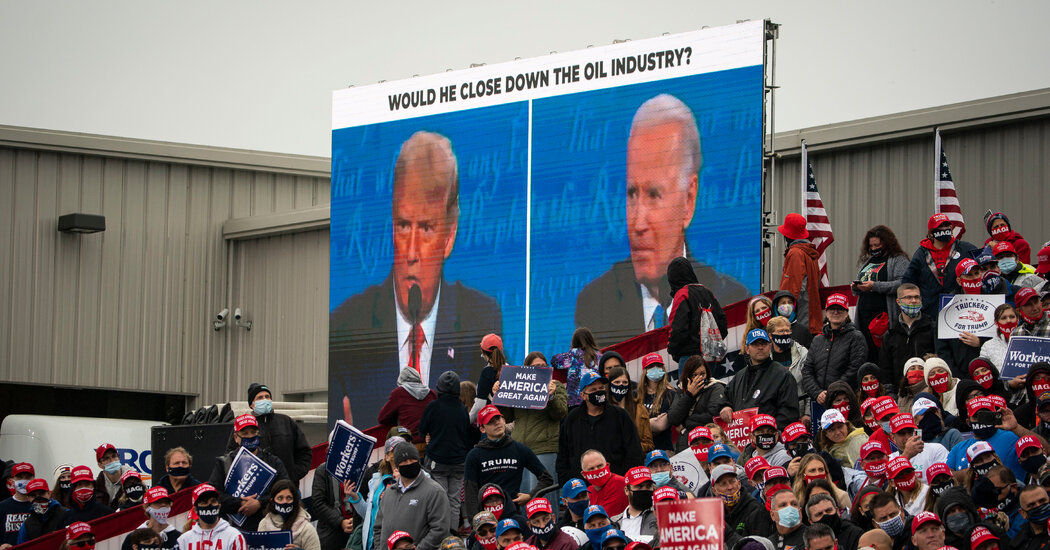 If you’re a supporter of that radical extremist group Keep America Habitable for Human Beings, you might have been encouraged by the 2020 presidential race.

In 2016, climate change — the scientific fact of the earth’s encroaching uninhabitability — was mostly ignored, including in the debates between Donald Trump and Hillary Clinton. This year, the changing climate and what to do about it got airtime in both presidential debates and the vice-presidential debate. Climate change was also one of the top issues during the Democratic primary race. Several candidates published detailed climate plans; Joe Biden’s proposal is the most ambitious response to climate change ever proposed by a major-party nominee for president.

And yet I keep getting discouraged by how far there is to go. Voters, the candidates and especially the political media have not given it enough attention this year, considering the stakes at hand. Worse, when politicians do address climate change, the discussion in mainstream media is often uninformed, following a script favorable to oil companies.

These problems were on stark display in the ridiculous dust-up over Biden’s statement during the debate last week that the United States needs to transition away from oil. When asked about climate change, Biden told a series of truths. He noted, correctly, that it’s an “existential threat to humanity,” that “we don’t have much time” to address it, that doing so could create hundreds of thousands of jobs and that it would involve eliminating our reliance on the cause of the problem, fossil fuels.

Trump’s answer was a series of absurdities. He said that he loves the environment, but that plans to address climate change would cost a lot of money and many jobs, would require buildings with very small windows and that wind power creates “fumes” and kills a lot of birds. (In fact, cats, buildings and cars are far bigger threats to birds.)

I’m not sure how anyone could come away from that debate thinking that Biden is the one who made a rhetorical flub. “The takeaway isn’t what Biden said, it’s what Trump said,” Kendra Pierre-Louis, a former reporter for The New York Times who is now a reporter on the podcast “How to Save a Planet,” told me. “Trump effectively said he doesn’t have a climate plan, and we are facing an existential crisis.”

Yet it was Biden, not Trump, who got in political hot water for his answer. After the debate, Trump’s campaign, with an assist from talking heads on cable news and the internet, began suggesting that Biden’s comments would hurt his chances in oil- and gas-producing states like Texas and Pennsylvania. Biden later walked back his comment, explaining that a transition away from oil would take very long time.

What a disaster. Why can’t we abide an honest discussion about climate change?

One problem is the Electoral College: Our nutty electoral system gives more say to some voters than others. This year the nation has suffered a string of terrifying weather disasters hastened by climate change. Large parts of the West are on fire, and there have been so many tropical storms that we had to go deep into the Greek alphabet to name them. But in the race for president, the future of the fracking industry in Pennsylvania is elevated above all these other problems, because Pennsylvania is a swing state and Louisiana is not.

To make things much worse, the pundit class on Twitter and cable news rarely discuss climate change as the existential threat to humanity that it now plainly is.

It’s easy to dismiss talking heads as background noise, but how we talk about climate change does real damage. The climate is often viewed through a narrow, partisan lens — as if it’s just another lefty issue, somewhere on the priority list between free college and a higher minimum wage.

But passing a climate plan wouldn’t be a partisan win for Democrats — it would be a win for human beings. Climate change isn’t a policy issue — it’s a reality that every other political question hinges on: jobs, tax policy, national defense, and the size and scope of the welfare state. As climate change becomes increasingly damaging, we will have to think about all of these issues through the larger response to a changing planet.

Finally, efforts to address climate change are usually framed as a trade-off between the environment and jobs, which is way off base. The trade-off goes the other way. Every major climate proposal involves lots of government spending to create more sustainable technologies and infrastructure — a process that experts say would result in more economic activity, including new jobs.

On the other hand, ignoring climate change will be costly. A report published by 13 federal agencies in 2018 estimated hundreds of billions of dollars in damage and a reduction in gross domestic product of up to 10 percent by the end of the century if America does nothing.

Emily Atkin, a journalist who covers climate change in her newsletter, Heated, analyzed media coverage of last week’s Trump-Biden climate exchange. Out of 30 mainstream news outlets, she found that only a handful mentioned the cost of inaction on climate change, raising the concern that “voters might not be getting a balanced look at presidential climate policy at a crucial point in the election,” she wrote.

One possibly very silly metaphor I have found useful for conveying the enormity of climate change is an alien attack. Imagine that the Martians arrive, hover over our planet and aim their weather machines at us to create hurricanes and fires, flood our cities, raise the seas, and otherwise generally cause destruction.

How would we talk about the problem then? If one candidate showed us a plan for creating a new ray gun to defeat the aliens, and the other insisted everything was fine and the alien ships were actually just clouds, who would you vote for?

As people who want a habitable planet, we’ve got to demand that political media and politicians approach this issue with the gravity it deserves. Climate change is real. Its effects are now being felt around the nation and the world. And when one politician offers a plan to address the thing causing all this misery and the other does not even bother, it shouldn’t be this difficult to spot the problem.

The sitting president of the United States has no plan to address the most important problem facing humanity. That’s it. That’s the scandal. That’s the tweet. That’s the headline.

Farhad wants to chat with readers on the phone. If you’re interested in talking to a New York Times columnist about anything that’s on your mind, please fill out this form. Farhad will select a few readers to call.

DMRC suspends metro services from NCR to Delhi; here`s what you should know

The Differences Between the House and Senate Police Reform Bills

DMRC suspends metro services from NCR to Delhi; here`s what you...

Nation First remains our commitment in the difficult phase of Coronavirus...