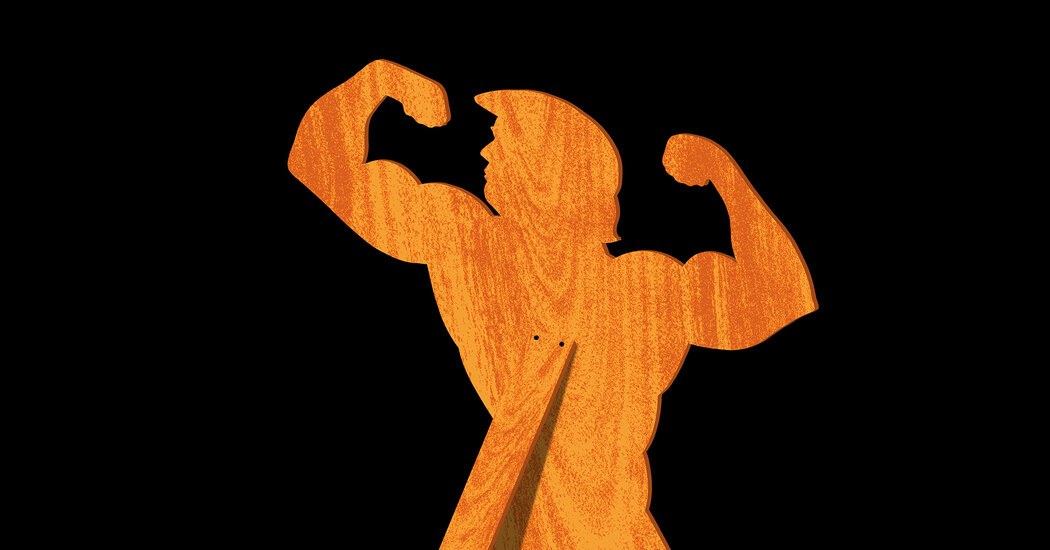 Remarkably, in these fractious times, President Trump has managed to forge a singular area of consensus among liberals and conservatives, Republicans and Democrats: Nearly everyone seems to agree that he represents a throwback to a vintage version of manhood.

After Mr. Trump proclaimed his “domination” over coronavirus, saluting Marine One and ripping off his mask, the Fox News host Greg Gutfeld cast the president in cinematic World War II terms — a tough-as-nails platoon leader who “put himself on the line” rather than abandon the troops. “He didn’t hide from the virus,” Mr. Gutfeld said. “He was going to walk out there on that battlefield with you.”

Meanwhile, the putatively liberal news media was conjuring its own version of the boxing ring: with Mr. Trump in one corner as atavistic chest-beater and Joe Biden in the other as evolved exemplar of feminist-sensitized manhood.

But what if the one thing people agree on, they’re wrong about? What if Mr. Trump’s style of bullying and bombast aren’t relics of the old manhood, but emblems of a masculinity very much au courant? If that’s so, we may be fooling ourselves in declaring that his noxious model is heading for a natural extinction.

Mr. Trump’s handlers have long packaged him as a leatherneck commander, à la “Sands of Iwo Jima” — the embodiment of a retro virility that American society supposedly once celebrated until feminists torpedoed it.

Mr. Gutfeld isn’t the first to have reached for World War II metaphors when describing the president: Steve Bannon noted during the 2016 race that Mr. Trump’s popularity was “predicated on that Greatest Generation determination, that grit,” while paying homage to that era’s manhood as “the guy in the trenches, the guy that had to climb the cliffs” on D-Day.

Others in the inner circle put it differently: “The era of the ‘Pajama Boy’ is over,” Sebastian Gorka, soon to be a White House deputy assistant, gushed in December 2016. “The alpha males are back.”

Except that the coming alphas would be gun fetishists in Hawaiian shirts, storming state capitols and planning the abduction of a governor they called a “tyrant bitch.” Greatest Generation, really? How about the opposite?

The masculine archetype of the 1930s and ’40s was the anonymous common man who proved his chops through communal building, not gunslinging. In a 1932 speech, Franklin Delano Roosevelt declared that “the man of ruthless force had his place in developing a pioneer country” but he now endangered the nation.

“The lone wolf, the unethical competitor, the reckless promoter,” he said, “whose hand is against every man’s, declines to join in achieving an end recognized as being for the public welfare, and threatens to drag the industry back to a state of anarchy.” New Deal America championed a manliness of usefulness, demonstrated through collective service and uncelebrated competence.

Of the grunt ethic, Pyle wrote, “We are all men of new professions, out in some strange night caring for each other.” This service-oriented prototype of manhood — tending to the needs of others, providing protective support, spurning the spotlight — was essentially a maternal masculinity, all the purported qualities of motherhood, recoded for the Y chromosome.

If anyone in the race is channeling that precept, it’s Mr. Biden, who, a day after federal officers tear-gassed peaceful protesters to make way for Mr. Trump’s photo-op outside St. John’s Church, called the presidency “a duty of care — to all of us.” Ernie Pyle would have worn a mask, because it comported with the masculine ethos of his era: shielding others from harm, being enlisted in the country’s defense.

Mr. Trump could not be more at odds with that ethic. His is a Potemkin patriarchy, the he-man re-engineered for an image-based, sensation-saturated and very modern entertainment economy.

How to characterize this new form of masculinity? In a word: ornamental.

Contemporary manliness is increasingly defined by display — in Mr. Trump’s case, a pantomime of aggrieved aggression: the curled lip, the exaggerated snarl. Display permeates his ratings-obsessed presidency. It’s why he chose his vice president (he “looks very good”) and his former defense secretary (“If I’m doing a movie, I’d pick you, general”). The chief executive of Newsmax, Chris Ruddy, noted of his friend Mr. Trump’s inclinations, “It’s more about the look and the demeanor and the swagger.”

Ornamental manhood is the machismo equivalent of “I’m not a doctor but I play one on TV.” Or, in the boogaloo movement’s version, “I’m not actually a soldier but I wear camo and walk around downtown with my big gun.” (In Mr. Trump’s case, it’s “I’m not a successful builder but I played one on ‘The Apprentice.’”)

The great shame is not that Mr. Trump brought an anachronistic masculinity into the Oval Office, but that he used the Oval Office to market a very modern brand of compensatory manhood — with a twist.

The hallmarks of contemporary ornamental masculinity — being valued as the object of the gaze, playing the perpetual child, pedestal-perching and mirror-gazing — are the very ones that women have, for half a century, struggled to dismantle as belittling, misogynist characterizations of femininity. The preoccupation with popularity, glamour, celebrity, appearance — what are these qualities but the old consumer face of the Girl? If Mr. Trump is reclaiming a traditional stereotypical sex role, it’s one that long belonged to women.

Why have so many of the modern-day grunts who mourn the loss of “old-fashioned” manhood hitched their wagon to a silk-suited flyboy? Since at least the 1990s, and at full tilt in the era of social media, men have been faced with a quandary: how to define their sex in a culture where visibility, performance and marketability are the currency. You could say that Mr. Trump has, if nothing else, found a way. But he’s done so not by defending the Greatest Generation man, but by abandoning him.

The gender gap in this election can be simply explained. Most women are turned off by the toxic displays of chest-beating that many male voters — notably but not exclusively white — find exciting. That level of ostentatious macho arrived in the Oval Office on a wave of 21st- century male insecurity. We should pay attention to that wave because it’s not receding.

Women were trapped in their ornamental cage because they were locked out of productive work and economic self-sufficiency — assets now increasingly denied to men. But if men respond to the frustrations of modern manhood by retooling a shopworn and castoff model of ornamental femininity, then we’ll all be in trouble.

If he wins the election, Mr. Biden’s success, but, more important, the nation’s success, will depend in part on his ability to re-enlist Mr. Trump’s foot soldiers into what all of us want — a meaningful role in a mutual effort that serves the greater good.

The postelection battle — still to be declared and still to be determined — is not over whether Mr. Trump’s version of masculinity is old or new. It’s whether American manhood will come down on the side of nurturance or narcissism. The vintage won’t matter.

Susan Faludi is a journalist and an author, most recently, of the memoir “In the Darkroom.”

California, the Most Calamitous Place on Earth

S.T.D. Rates Are Falling, Data Show. That May Not Be Good News.

‘I Am Going to Physically Explode’: Mom Rage in a Pandemic