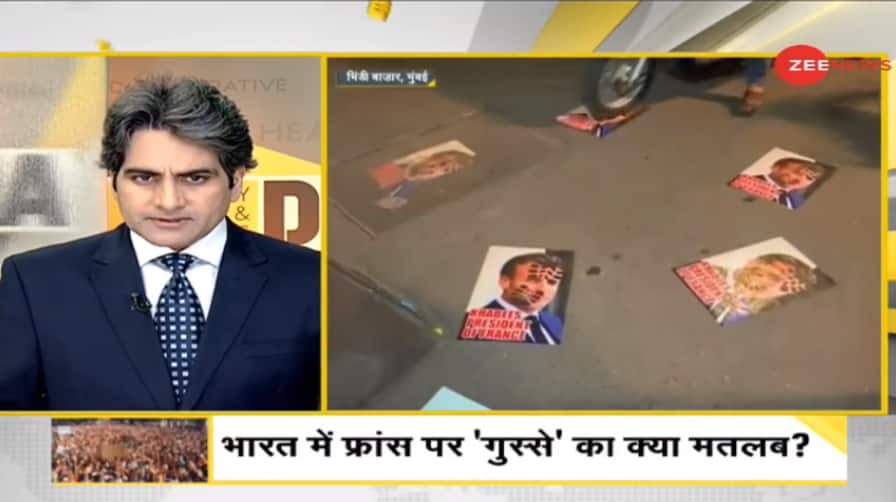 New Delhi: Muslims of India on Friday (October 30) took to the streets across the country to protest against President Emmanuel Macron who vowed to stand firm against Islamist terror attacks to retain French values and freedom of belief after killings in a Church.

These Muslims, however, did not oppose the ruthless killings in the French Church but came out in solidarity with the murderer. Muslims protest never occurred against terrorists like Hafiz Saeed and Masood Azhar for perpetrating terror attacks in India. This handful of Muslims also did not take to the streets to protest against the 2019 Pulwama terror attack.

Notably, Prime Minister Narendra Modi has stood by French President Emmanuel Macron’s fight against terrorism, but some Muslims in India are opposing Macron. India on Thursday announced its unflinching support to France and strongly condemned the terrorist attack on French Church, saying such acts of hatred cannot be justified.

In Mumbai’s Bhendi Bazaar, posters of the French President were pasted on the streets so that vehicles, people, and animals would pass through them, thereby, insulting Emmanuel Macron.

In Madhya Pradesh’s Bhopal, thousands of Muslims led by Congress MLA Arif Masood staged a protest against France, raising objectionable slogans against Macron, flouting rules of social distancing.  An FIR has been registered against the Congress MLA and 2000 others who took part in the demonstrations. Protesters in Aligarh of Uttar Pradesh, however, raised slogans of the death sentence of the President of France.

Similar protests were also witnessed in Pakistan, Bangladesh, and Palestinian territories, Turkey, Saudi Arabia, and Iraq on Friday where tens of thousands of Muslims took to the streets over Macron’s remarks after killings in France.

France, however, has raised its security alert to the highest level on Thursday after a knife-wielding man shouting “Allahu Akbar” beheaded an elderly woman in a Church and killed two more people. Outside Notre Dame Basilica in the French Riviera city of Nice, Macron said, “We will not give any ground,” adding France had been attacked “over our values, for our taste for freedom, for the ability on our soil to have freedom of belief”.

The violence coincided with growing Muslim anger over France`s defence of the right to publish cartoons depicting the Prophet Mohammad after an Islamic terrorist decapitated a French teacher earlier this month for showing such images to pupils during a civics lesson.

France has reimposed a nationwide lockdown to prevent coronavirus infection. A large number of people, however, came out of their homes to pay tributes to those killed in Thursday’s terrorist attack.

The French police have arrested another 47-year-old suspect, who was in contact with a terrorist who killed people on Thursday. The assailant is named Ibrahim Isoi, who is 21-year-old hails from Tunisia and came to Europe about a month ago. When this terrorist entered the Church to kill people, he also had a copy of the Quran.

Similarly, the Islamic terrorist who killed Samuel Patty two weeks ago was also a refugee. 18-year-old Abdullah Anzorov came as a refugee from Chechnya to France at the age of 6 and had been living here for 12 years. In the month of September, he came in contact with a Syrian jihadist and planned the assassination of Samuel Patty. After committing the murder, this terrorist had also shared an audio message saying he has avenged the insult of Prophet Mohammad.

Both these Islamic terrorists were refugees, and they came to France from different countries but they chose the same method to kill people. Earlier, when these refugees went to another country, people living there opposed them saying that these people would take away the resources of their country and they have to share their civil rights with them. More than that, now these refugees are taking away not only the resources but also their lives.

It may be mentioned that the magazine, Charlie Hebdo, which printed controversial cartoons of Prophet Mohammed, is run by atheists and it has been printing cartoons on other religions as well, but people of any other religion hardly protested this way.

Mocking or insulting deities of religion is called Blasphemy. At present, there are blasphemy laws in 69 countries and there is a provision of severe punishment for those who indulge in it. Six countries even award capital punishment for such a crime, but France does not have such a law.

People who are shedding blood in the name of religion often forget that France is a secular country and the Constitution holds a superior position than the religion.

India too has faced many evils in the name of religion, but some people stood against some practices but they were not called blasphemers but social reformers. The world should understand this difference that when evil practices of any religion are erased, that religion is not corrupted but becomes more mature and more harmonious.

France is expected to enact a new law in the coming few days to save the values ​​of the Republic of France. This law promises to give everyone the right to equality while extending security to everyone. Under this law, the French government will be able to keep an eye on all the mosques in the country and religious teachers will be given fresh training and they would be given certificates for the same.

In President Macron’s France, the French version of Islam will be developed, which will include the values ​​of secularism and protect the French Muslims from becoming the victims of Wahhabi and fundamentalist thinking. People of India who are opposing France should understand that standing against fundamentalism is not anti-Islam or anti-Muslim.

If India failed to incorporate these systemic changes in its systems, then the pictures coming from different parts of the country will become a common sight cene.

Here Are The Ways to Vote in the 2020 Presidential Election

A Shutdown May Be Needed to Stop the Coronavirus