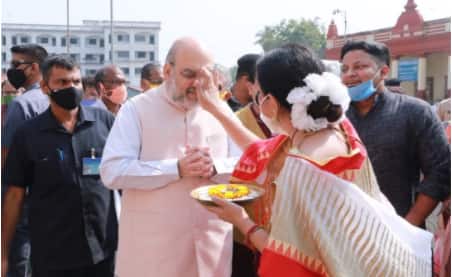 Kolkata: Union Home Minister Amit Shah on Friday (November 6) asked the people of West Bengal to provide the Bharatiya Janata Party (BJP) an opportunity to serve the state for five years to convert it into ‘Sonar Bangla’.

Addressing a press conference, Amit Shah said, Our aim is to build a strong Bengal in a new era of development, but Mamata Banerjee’s aim is to make her nephew the next Chief Minister,” adding “She has failed to meet all expectations. Bogus promises were made. Mamata got angry when slogans of Bharat Mata ki Jai and Jai Shri Ram were raised.”

“We have transformed the states where the BJP has ruled. The general sentiment is against the TMC govt is that Didi wants her bhatija (nephew) to become the next CM. Bengal will decide if they want Parivarvad or not.”

“Corruption has been institutionalized in the state. Three kinds of laws are there in the state: one for her nephew, other for her ‘vote bank’, and then for common people, while it should uniform for everyone,” said Amit Shah, flaying the law and order situation in the state.

The Home Minister said the state administration has been politicised and politics has been criminalised, adding “Corruption has taken place in the cyclone and COVID funds.

“Appeasement has reached its apex. No point in filling guddas, as people have guddas for you in their hearts. Why haven’t you submitted crime records with the National Crime Record Bureau after 2018? What are you hiding?” questioned Amit Shah, citing increasing crime against women in the state.

“He further said, “You are a woman, will you answer. More than 100 political workers have been killed in one year. Whether it is of BJP, Congress or CPM. Has any legal action been taken? Modiji has done a lot for Bengal. We will give you the data. Worst implementation of Central government schemes have been in Bengal,” he added.

The Home Minister further said, “Why don’t the poor get these benefits? Every month, she writes for Central government aid. This money will go to the pockets of TMC cadres. After May, PM Modi will directly send money in your accounts. The TMC government has renamed yojanas, but they won’t help them.”

“We will win with more than 200 seats in the upcoming Assembly election. You smiled when I said 22 last time. It’s my time to smile as I know we will win,” Shah added.

Earlier in the day, the Home Minister paid a visit to a Matua household in Baguihati in the northern fringes of the city and had his lunch there. Before reaching the residence of Nabin Biswas, he went to a temple of the Matuas in the locality where he spent some time.

After lunch, Shah reportedly interacted with the family members and a few other members of the Matua community living in the area.

Amit Shah is on a two-day tour to the state to take stock of the party’s organisation before the 2021 assembly polls in West Bengal due in April-May. Friday is the final day of his tour to the state.

The TMC, however, mocked Shah’s scheduled visit to a Matua family for lunch and described this outreach as a “poll gimmick” to divert attention from atrocities committed on backward communities in states ruled by the BJP.

New York, Where Many Chose Not to Drive Ever, is Suddenly Motor City

Where an American Passport Doesn’t Work: The World, and Irish Pubs