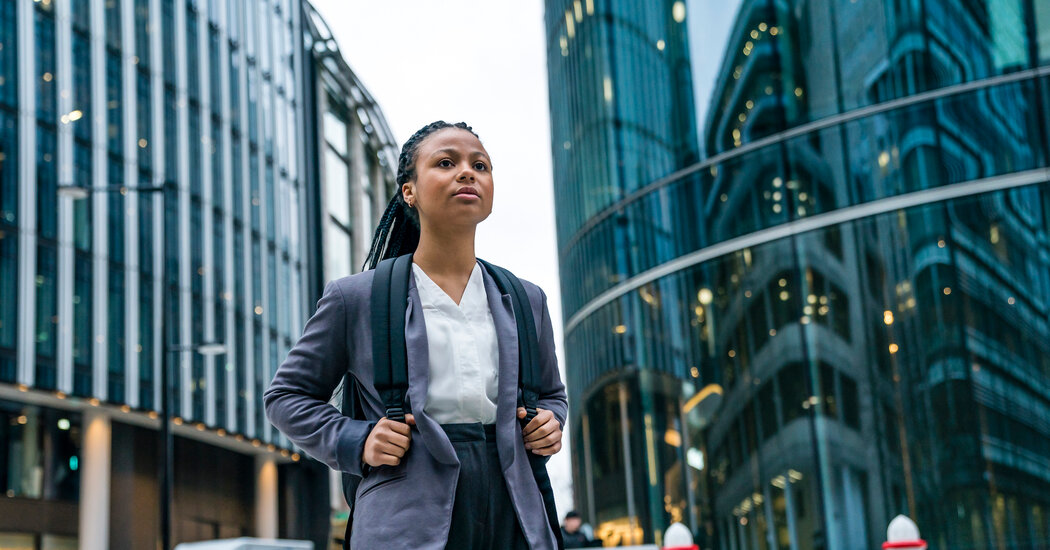 Look to your left. Look to your right. One of us is watching a show that’s so uninterested in originality that some character trots out that speech you’ve heard so many times before: One of you won’t finish this prestigious, grueling program.

Often that spiel is delivered on doctor shows or lawyer shows, but on “Industry,” which premieres Monday on HBO, it happens in an elite investment bank in London. And that’s how most of the four episodes made available for review go: Familiar stories and beats just set in the world of finance instead of elsewhere, which means less emotional stakes but more scenes where people aggressively chew gum.

If this was “Grey’s Anatomy” — it wishes — our Meredith would be Harper (Myha’la Herrold), a savvy and driven underdog, with a few secrets. She’s part of a cadre of “grads” gunning for jobs at the bank, though it’s not clear what the jobs actually are and the differences between the various roles is one of the show’s persistent vagaries. Maybe that’s “Industry” commenting on capitalism wringing individuality out of us. Maybe.

Harper says in her job interview that she considers banking to be “the closest thing to a meritocracy,” which might be a canny ploy, her ingratiating herself by feeding the executives their own favorite (if hilarious) myth. But it plays like something she truly believes. Later, in one of many druggy scenes, she says, “I actually wrote a paper on the moral case for capitalism.”

“That must have been short,” her colleague jokes.

“No, it was 8,000 words,” she says, snorting another line. But that’s the end of it. Neither she nor the show dwell on issues of morality, ethics or purpose.

Instead, “Industry” retreats from complex adult drama to functional enough YA show. Everyone sure has some growing up to do! Ugh, roommate drama! Uh-oh, my crush likes my friend! Ack, I threw up! Will the guy who is clearly marked for death from the first five seconds of the show die?

The poor little rich girl, the gay guy, the one who parties way too much — self-actualization is always just a few good meetings away, one “you remind me of myself” speech from a mentor, one “we can do this together” hug from a friend.

The show seems to think its naughtiness and bad behavior have an edge, like in “Skins,” but really “Industry” is more like “The Bold Type” with male nudity. And like many other shows about young adults seeking validation, the sage authority figure and source of all approval is the best character. Here it’s Ken Leung (“Lost”) as Harper’s boss, who sometimes has good advice and seems less inclined toward the fratty abuse everyone else at the company embraces.

Much of the action of “Industry,” such as it is, takes place in bathrooms, where people say and do things they shouldn’t because vulnerability creates intimacy. The show would benefit from more intimacy in general — not among its characters but between the characters and the audience. In the fourth episode, Harper makes a mistake at work and sobs on the phone to her mother, who barely responds. Other than the ordinary pity one extends to anyone crying on a toilet, though, the scene is absent any emotional potency because it’s unclear how bad the actual problem is or why Harper cares about it so much. Or why anyone should.

“Industry” was created by the first-time showrunners Mickey Down and Konrad Kay but Lena Dunham (“Girls”) directed and executive produced the pilot. All the pieces work fine — its gray and noisy world is fully realized and each character has a clearly defining schtick.

But the show doesn’t appear to be about anything. Everyone is in favor of winning and opposed to losing, but there’s no meaningful motivation or specificity to any of their behaviors. What might someone enjoy about banking that they can’t get from any other lucrative profession? Plenty of industrious 22-year-olds pursue power, autonomy, pleasure, stability, safety or vengeance — all things money can represent. What does it mean, then, to pursue money qua money?

Perhaps those answers, or even just those questions, come in the second half of the season.

There is no proof that people stole maiden names to vote.

How a Savior of Rwanda, Paul Rusesabagina, Became Its Captive