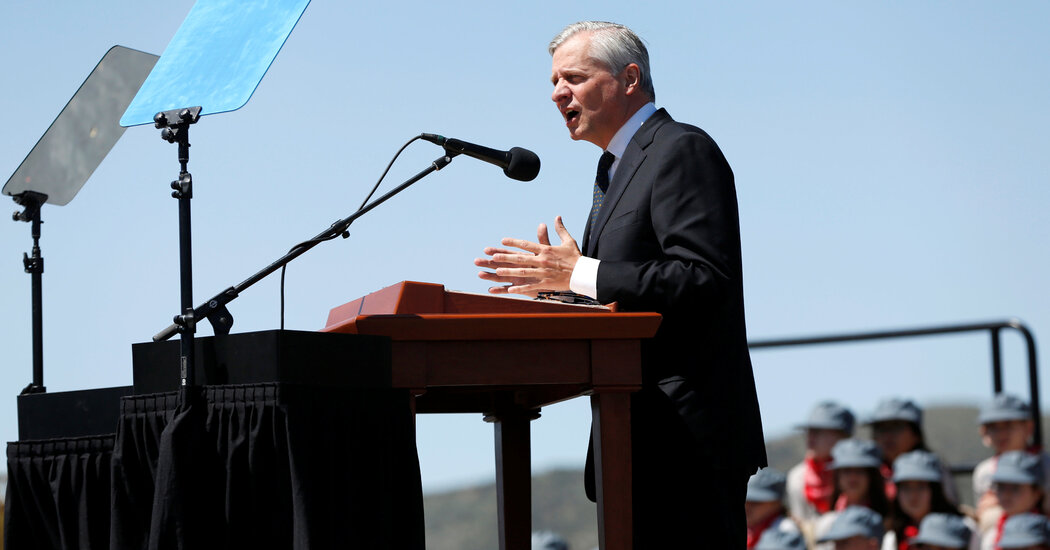 Jon Meacham, the presidential historian and biographer, has been helping to craft President-elect Joseph R. Biden Jr.’s speeches, according to multiple sources involved, including helping to write the acceptance speech that Mr. Biden delivered Saturday night from Wilmington, Del.

In that address, Mr. Biden spoke of a mission “to rebuild the soul of America, to rebuild the backbone of this nation, the middle class and to make America respected around the world again.” Mr. Meacham’s 2018 book, “The Soul of America: The Battle for Our Better Angels,” has long served as a touchstone for Mr. Biden, who read it and has reached out to Mr. Meacham in the past to discuss passages he liked.

Mr. Biden’s speech-writing process is run by Mike Donilon, the president-elect’s longtime adviser. But behind the scenes, Mr. Meacham has been playing a larger role than was previously known, both writing drafts of speeches and offering edits on many of Mr. Biden’s big addresses, including one he gave at Gettysburg last month and his acceptance speech at the Democratic National Convention in August.

TJ Ducklo, a spokesman for Mr. Biden, downplayed Mr. Meacham’s role. “President-elect Joe Biden wrote the speech he delivered to the American people on Saturday night, which laid out his vision for uniting and healing the nation,” Mr. Ducklo said. “Given the significance of the speech, he consulted a number of important, and diverse, voices as part of his writing process, as he often does.”

A Biden official added that Mr. Meacham was involved in discussions about the themes in the victory speech.

Mr. Meacham, who has voted for presidents in both parties, played an unusual role during the campaign. He publicly endorsed Mr. Biden in an op-ed and received a prime speaking slot at the D.N.C. this year.

“To record history doesn’t mean you are removed from it,” Mr. Meacham said over the summer, noting he had been friends with Mr. Biden for a long time.

Mr. Meacham is currently not expected to join the administration. But his role helping to craft Mr. Biden’s biggest addresses has shades of the presidential historian Arthur M. Schlesinger Jr.’s relationship with President John F. Kennedy. Mr. Schlesinger worked for Mr. Kennedy’s campaign and as a member of his White House staff.

During the Trump years, Mr. Meacham has been a regular presence on both MSNBC and NBC News’ broadcasts, where he served as a paid contributor.

The network declined to comment on Monday, but Mr. Meacham will no longer be a paid contributor going forward, according to a person familiar with the decision. That person added, however, that Mr. Meacham would be welcomed back on the airwaves as a guest.

Indeed, Mr. Meacham appeared on MSNBC both shortly before and after Mr. Biden’s speech. About half an hour after the speech had concluded, the anchor Brian Williams introduced Mr. Meacham by saying, “I’m not the historian that you are, and I don’t have the Pulitzer that you do, but do you concur that is the way we are used to hearing from our presidents?”

“Absolutely,” Mr. Meacham responded, without disclosing that he been involved in the writing of Mr. Biden’s speech.

Steve Inskeep Is Drawn to Books With Nuanced Female Characters