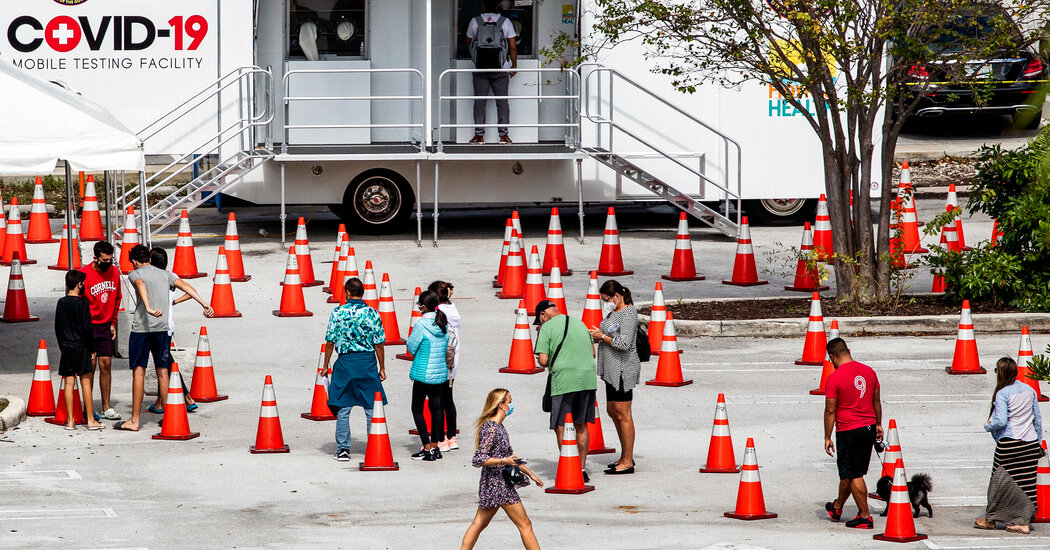 Hours after President-elect Joseph R. Biden Jr. declared the coronavirus a top priority, the magnitude of his task became starkly clear on Sunday as the nation surpassed 10 million cases and sank deeper into the grip of what could become the worst chapter yet of the pandemic.

The rate of new cases is soaring, and for the first time is averaging more than 100,000 a day in the United States, which has reported more virus cases than any other country. An astonishing number of Americans — one in 441 — have tested positive for the virus just in the last week.

With 29 states setting weekly case records, the virus is surging in more than half the country. Nationwide, hospitalizations have nearly doubled since mid-September, and deaths are slowly increasing again, with few new interventions in place to stop the outbreak.

The nation’s worsening outlook comes at an extremely difficult juncture: President Trump, who remains in office until January, is openly at odds with his own coronavirus advisers, and winter, when infections are only expected to spread faster, is coming.

In a victory speech on Saturday night, Mr. Biden said he was quickly focusing his attention on the pandemic, including plans on Monday to announce a task force of coronavirus advisers.

But he faces a nation divided over mask rules and business shutdowns, even as experts say the situation may further deteriorate before the new administration takes over in late January.

At the White House, Mr. Trump has largely shuttered the coronavirus task force, insisted without evidence that the nation is “rounding the corner” in the fight against the virus, and suggested that he might fire the government’s top infectious disease expert, Dr. Anthony S. Fauci. In the days before and after Election Day, six White House aides and a top campaign adviser tested positive.

All of it comes as colder weather will force more people indoors; as college semesters end and students return home; and as gatherings for Thanksgiving, Christmas and other holidays threaten to sow new outbreaks.

“I see this as a very precarious moment,” said Dr. Ashish K. Jha, the dean of the Brown University School of Public Health, who said that the Trump administration had “basically thrown in the towel” on trying to control the pandemic, while Mr. Biden and his team have nothing to wield but “moral power and social power” until Jan. 20.

“Without significant action,” Dr. Jha said, “the idea that we have another 100,000 deaths by Inauguration Day would be a conservative estimate.”

Hungary prepares to carry out tests and a trial of Russia’s Covid-19 vaccine.

India`s farmers, honest taxpayers behind the success of free foodgrain for over 80 crore...