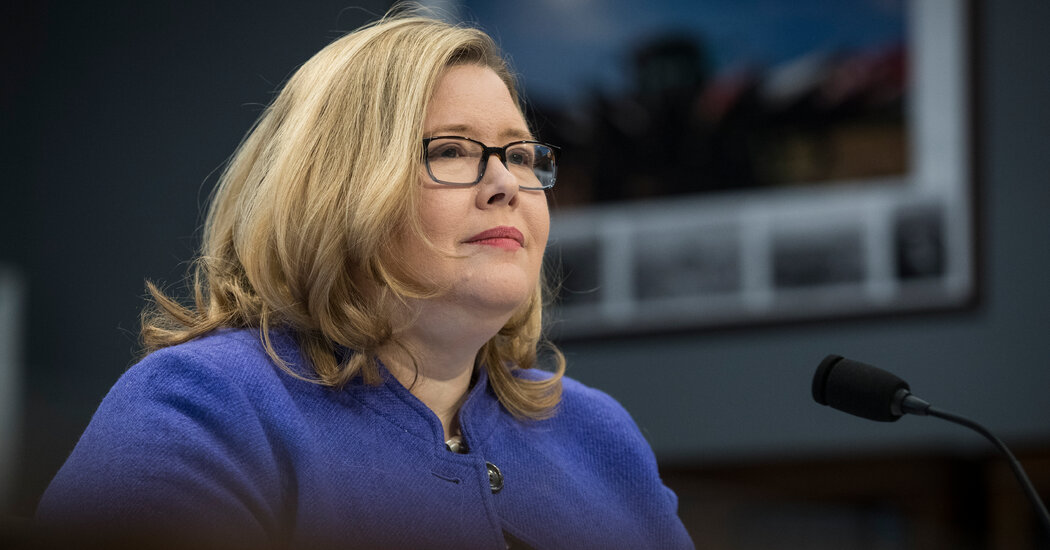 Emily W. Murphy, a Trump administration appointee who described herself as “a bit of a wonk” at her confirmation hearing, is standing between President-elect Joseph R. Biden Jr.’s team and a smooth transition.

By law, Ms. Murphy, the administrator of the General Services Administration, the sprawling agency that keeps the federal government functioning, must formally recognize Mr. Biden as the incoming president for his transition to begin.

Yet President Trump refuses to concede the election and has his campaign contesting results in multiple states. Most Republicans have declined to recognize Mr. Biden, much less appointees like Ms. Murphy. And so the transfer of power that must take place, known as a letter of “ascertainment” that Mr. Biden is the president-elect, signed by Ms. Murphy, is in limbo.

A White House spokeswoman did not immediately respond to a question about whether Mr. Trump was willing to let Ms. Murphy begin the transition without a concession from the president, as his court fights play out.

Leslie Dach, who was to lead the transition for the Department of Health and Human Services had Hillary Clinton won the presidency in 2016, said that despite the advance work done by Mr. Biden’s team during the campaign, nothing could supplant having direct access to agencies, and that is impossible without Ms. Murphy.

“I think this is Trump sending a clear signal to everybody still standing in the administration that you’ve got to still follow his grievances,” Mr. Dach said.

Aides to Mr. Biden have been working for months to develop transition plans that are fine-tuned to help the president-elect quickly make good on his campaign promises. Those review teams comprised people knowledgeable about each federal agency are critical.

Ms. Murphy has the legal authority to “turn on” the transition, releasing the $6.6 million in federal funds budgeted for the effort, making office space available and empowering team members to visit agency offices and request information.

It is often seen as the official starting gun of the transition. Under normal circumstances, Ms. Murphy’s decision would usually be prompted by the concession speech by the election’s loser, which is not a legal act, but it signals that both sides accept the result. In 2016, the acting administrator of the G.S.A. under the Obama administration made the determination on the morning of Nov. 5, right after the election.

But there is no specific provision for when Ms. Murphy must act.

Pamela D. Pennington, a spokeswoman for the G.S.A., said in a statement on Monday that “an ascertainment has not yet been made. G.S.A. and its administrator will continue to abide by, and fulfill, all requirements under the law and adhere to prior precedent established by the Clinton administration in 2000.”

Aides to Mr. Biden say they expect Ms. Murphy to act within a few days, but they are bracing for the possibility that political pressure from the president and his Republican allies will prevent that. In a statement on Twitter, Jen Psaki, a transition official, gently prodded Ms. Murphy to make the announcement.

“Now that the election has been independently called for Joe Biden, we look forward to the GSA Administrator quickly ascertaining Joe Biden and Kamala Harris as the President-elect and Vice President-elect,” Ms. Psaki wrote. “America’s national security and economic interests depend on the federal government signaling clearly and swiftly that the United States government will respect the will of the American people and engage in a smooth and peaceful transfer of power.”

The coronavirus pandemic has made office space less critical for the Biden transition team, which has been mostly meeting remotely for the past several months and will continue to do so, according to a transition official. There is a skeleton staff at the office space that was provided by the government before the election.

But once Ms. Murphy signals that the transition can begin, that office space will be expanded and equipped with computer systems that give the new administration access to classified systems and information, in addition to a secure location to have secret conversations.

If that does not happen in days, the Biden administration has other options. Transition officials have private office space they can continue to use, and Mr. Biden and his team will continue to operate remotely. When the president-elect met with his pandemic advisory board on Monday, he was in Delaware and the board members were on a big screen, calling in from their homes or offices.

But that would not solve the problem of gaining access to classified information, which could affect the ability of Mr. Biden’s national security team to prepare themselves for emergencies that they may have to confront once they are in office.

Mr. Trump and his allies have criticized Democrats and the news media for projecting Mr. Biden as the winner before legal challenges and recounts have been completed. But historically, the “ascertainment” decision by the G.S.A. administrator has not waited for the outcome of such challenges.

In 2004, recounts in New Hampshire and Ohio were completed after the G.S.A. made a decision. And several states were decided by less than a single percentage point. In 2016, five recounts were filed after the G.S.A. announcement, and three were conducted in Michigan, Nevada and Wisconsin.

Ms. Murphy is an unlikely figure to be at the center of such an explosive situation: She is a low-key bureaucrat who began her career as a Republican staff member on Capitol Hill and professes her love of tax-dollar-saving procurement reform and lease renegotiations. Democrats who worked with her there said they remembered her as a diligent professional.

But her tenure at the G.S.A., which she has run since December 2017, has not been without controversy.

In 2018, House Democrats concluded that Ms. Murphy had misled them about her agency’s decision to reconsider the F.B.I.’s longtime plans to relocate its aging headquarters on Pennsylvania Avenue to a suburban area. Democrats found that Mr. Trump had intervened to kill the plan, potentially because he feared that a commercial developer could turn a vacated J. Edgar Hoover Building into a hotel that would compete with his own Trump International Hotel a block away.

The G.S.A.’s inspector general found that Ms. Murphy’s testimony on the matter to Congress in 2018 was “incomplete and may have left the misleading impression that she had no discussions with White House officials in the decision-making” when in fact she had, including during a visit to the Oval Office in 2017.

House Democrats have also concluded that Ms. Murphy has been slow to furnish them with documents and other information relating to the G.S.A.’s lease of the historic Old Post Office Building in Washington, the site of Mr. Trump’s hotel, to the Trump Organization.

Hawa Abdi, Doctor Who Aided Thousands in Somalia, Dies at 73

Uttar Pradesh govt not taking anything away from Mumbai but building a new film...