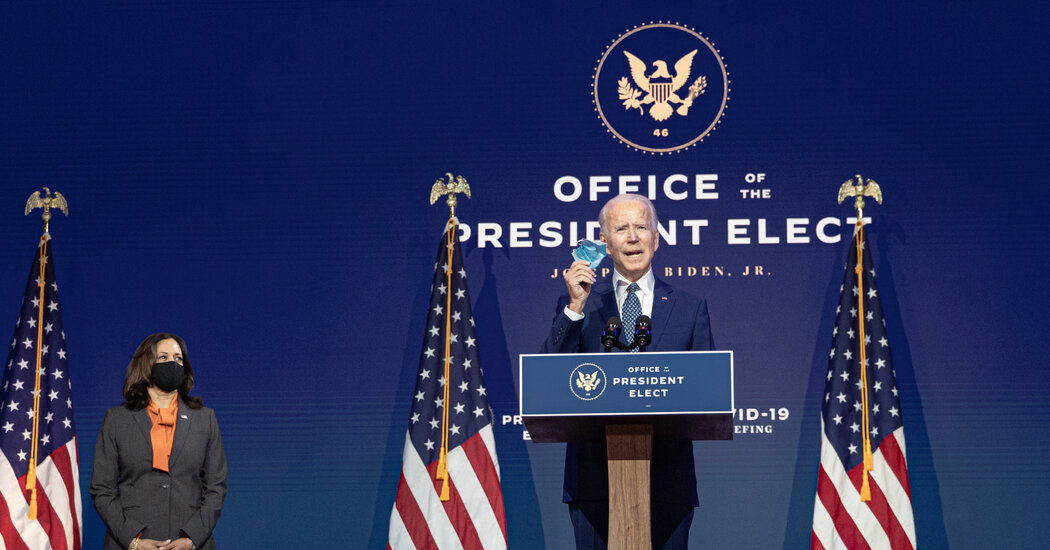 As the virus surges throughout the United States, President-elect Joseph R. Biden Jr. has begun preparing for how he will manage the pandemic by naming several high-profile advisers — including a former surgeon general and a former Food and Drug Administration commissioner — and imploring Americans to wear masks.

“A mask is not a political statement, but it’s a good way to start pulling the country together,” Mr. Biden said in Wilmington, Del. on Monday.

Mr. Biden has said he will ask governors to institute a mask mandate in their states; if they refuse, he will work with local officials to get mandates in place.

More than 130,500 new cases were announced in the United States on Monday, the second-highest total of the pandemic, and the sixth day in a row the country exceeded 100,000 cases in a single day. Twelve states and the territory of Guam set single-day records for new cases.

Across the country, governors and local leaders have put new restrictions in place in an attempt to slow the spread of the virus.

Gov. Philip D. Murphy of New Jersey laid out new restrictions for the state on Monday, calling for restaurants and nightclubs to shut down indoor service at 10 p.m. starting Thursday, and saying that no one may be seated directly at the bar.

In New York City, where the number of new cases is swiftly rising, health officials and Mayor Bill de Blasio’s aides have been discussing whether new citywide restrictions should be imposed.

New measures could include a broader shutdown of nonessential businesses if the citywide seven-day average rate of positive virus test results climbs, and stays, above 3 percent. The figure as of Monday was 2.26 percent over the last week, according to the city’s health department.

There have been more than 1,000 cases identified in New York City five days in a row this past week, according to a New York Times database.

In Utah, Governor Gary Herbert, a Republican, has announced a state of emergency, including a mask mandate that would apply statewide.

Social gatherings will be limited to “household only” for the next two weeks, Mr. Herbert said in a tweet, and all extracurricular activities at schools will be put on hold.

Utah had the 10th-highest daily average of cases per person on Monday evening, according to a New York Times database.

Denver installed a “Home by 10” order on Sunday evening, instructing people to remain in their homes between 10 p.m. and 5 a.m., except for essential activities. The order also prohibits “all public and private gatherings” between people from different households at all times.

Talks between Centre and farmer leaders end in deadlock; next meeting on December 5

From Asia to Africa, China Promotes Its Vaccines to Win Friends

Talks between Centre and farmer leaders end in deadlock; next meeting...