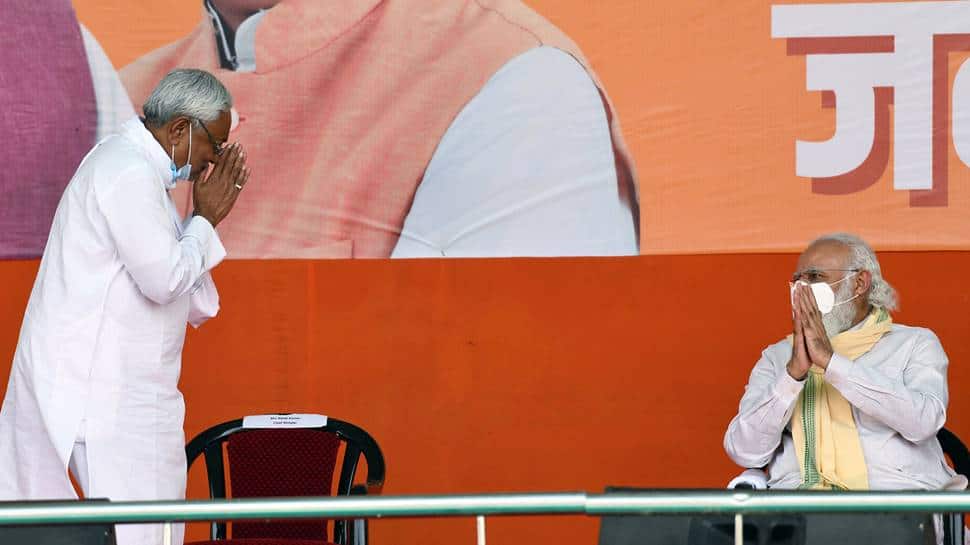 New Delhi: In a reverse of the exit poll prediction, the BJP has raced ahead in the Bihar Assembly election 2020 results vote count. The initial gains that the Grand Alliance had gathered has begin to shrink. The ruling NDA has overtaken the trends with a clear majority.

Notably, almost all exit polls had called for a strong show by Grand Alliance under the leadership of Tejashwi Yadav. But the current trends suggest that the exit poll was wrong indeed and that NDA will return to power.

According to the trends at this time, BJP and JDU are leading in 130 seats out of 243 seats. It is also a clear message of these trends that ‘Brand Modi’ continues to dominate. This is because BJP has been the most powerful performer in this election.

In the beginning, the Grand Alliance had made a significant edge over NDA. Later, NDA took a lead on 130 seats.

For the first time in trends, the NDA has got a majority. The Grand Alliance has been reduced to 104 seats which is very poor showing for the alliance parties.

The Grand Alliance’s CM candidate, Tejashwi Yadav is leading from Raghopur seat , however, his elder brother Tej Pratap Yadav is trailing from Hasanpur seat. Tej Pratap is trailing by 1365 votes. He is pitted against JDU’s Rajkumar.

Apart from this, BJP candidate Vijay Khemka from Purnia Sadar Assembly is leading with 1663 votes. Lacey Singh of JDU from Dhamdaha Assembly, Afaq Alam votes of Congress from Kasba Assembly, Bima Bharti of JDU from Rupauli Assembly are leading.

Meanwhile, Owaisi’s AIMIM party is currently leading in two seats in the counting of votes released for the Bihar Legislative Assembly elections. BSP too has an edge over one seat. Another important fact is that the Left parties are leading in 14 seats.

In a Short Season, Shane Bieber Is a Head Above the Rest