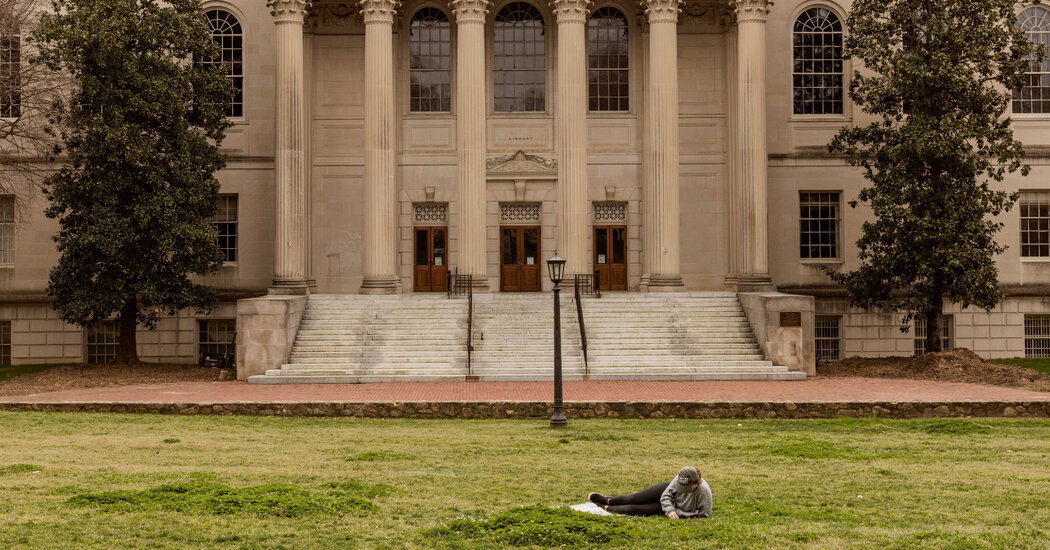 Since President Trump took office, his administration has challenged the right of colleges to use race as a factor in their admissions policies. It has brought a suit against Yale, supported another against Harvard and suggested that elite institutions have been “fostering stereotypes, bitterness and division among the American people” by dividing them into racial groups.

So it might have seemed logical to think that the election of Joseph R. Biden Jr. to replace Mr. Trump might have slowed the conservative attacks on affirmative action in college admissions. But a lawsuit that got underway on Monday in federal court in Winston-Salem, N.C., shows how that might not be the case.

Indeed the case against the University of North Carolina, brought by an anti-affirmative-action group called Students for Fair Admissions, underscores how private lawsuits, even without the support of the federal government, may wend their way up to the Supreme Court, where a 6-3 conservative majority could dismantle the policies.

In his opening statement on Monday, Patrick Strawbridge, the lawyer for Students for Fair Admissions, asserted that the university considered race in a heavy-handed, formulaic way that had given a large boost to Black, Hispanic and Native American students, while discriminating against white and Asian-American applicants.

Using a mathematical model developed by an expert witness for the plaintiffs, Mr. Strawbridge said it was possible to predict with more than 90 percent accuracy whether a student would be admitted.

The university’s admissions office takes race into account, he said, “even when it is not mentioned anywhere else in the application file other than the box the applicant checked at the time they applied.”

The university’s lawyer, Patrick Fitzgerald, countered that admissions was highly individualized, as required by Supreme Court precedent, and that the judgment of admissions officers was at the core of the process.

He said race was “a factor to be considered along with so many other things,” including grades, extracurricular activities and essays. The personal stories of applicants are important as well, he said, including things like “obstacles overcome, grit, determination.”

The North Carolina case is among several attacking affirmative action that will go forward in the courts even after the Biden administration takes office because they were brought by a private group, legal experts said. Students for Fair Admissions, which was created by the anti-affirmative-action activist Edward Blum, has also brought litigation against Harvard and the University of Texas.

The Trump administration filed a case against Yale in October, and a newly seated Biden administration — which is expected to support affirmative action policy — could choose to review and drop that case, experts said.

“I think the Biden administration is going to take a really careful look at the Yale case,” said Samuel Bagenstos, a law professor at the University of Michigan, and a principal deputy assistant attorney general for civil rights in the Obama administration.

Now that the Supreme Court has a 6-3 conservative majority, including the Trump appointees Brett M. Kavanaugh, Amy Coney Barrett and Neil M. Gorsuch, it has a chance to make the biggest change in affirmative action admissions in more than 40 years, when it forbade the use of racial quotas but supported the principle of diversity.

“I think there are six votes on the Supreme Court to dramatically limit affirmative action and to overrule earlier decisions allowing it, and that’s going to be true whether it’s Trump or Biden,” said Erwin Chemerinsky, a constitutional law scholar and dean of the University of California, Berkeley, law school.

The chance may be hard to resist, agreed Mr. Bagenstos. “Affirmative action is something that’s been a big agenda item of the conservative movement for a long time,” he said. “I think the justices know exactly what they want to do with these cases.”

In a referendum vote last week, California voters narrowly approved maintaining the state’s ban on affirmative action in college admissions, indicating some softness in public opinion on the issue even in a liberal state.

The Supreme Court could ultimately choose to hear the cases involving Harvard — which won in district court — and North Carolina, allowing it to decide the issue on both constitutional grounds, at a public university, and under civil rights law, at the private one.

Students for Fair Admissions has also brought a new lawsuit against the University of Texas at Austin, four years after having lost a landmark challenge to its affirmative action policies. Now the group argues that the university has become much more diverse, particularly among Hispanic students, since the first suit was filed, eliminating any rationale for considering race.

The judge in the North Carolina case, Loretta C. Biggs, hinted on Monday at how high the stakes were when she said she had decided to make an exception to the general rule that civil cases were not to be encouraged during the coronavirus pandemic.

“This is a very important case, with some significant constitutional issues,” Judge Biggs said as the trial was about to begin, with social distancing and remote audio in force. “The court believes that it is absolutely necessary that we move forward at this time.”

Why Is My Uncle So Mad About Student Debt Forgiveness?

Travel Insurance During Coronavirus Pandemic: What To Know

After Beirut Explosion, Protests Erupt as Lebanon’s Anger Boils Over

Why Is My Uncle So Mad About Student Debt Forgiveness?

Travel Insurance During Coronavirus Pandemic: What To Know