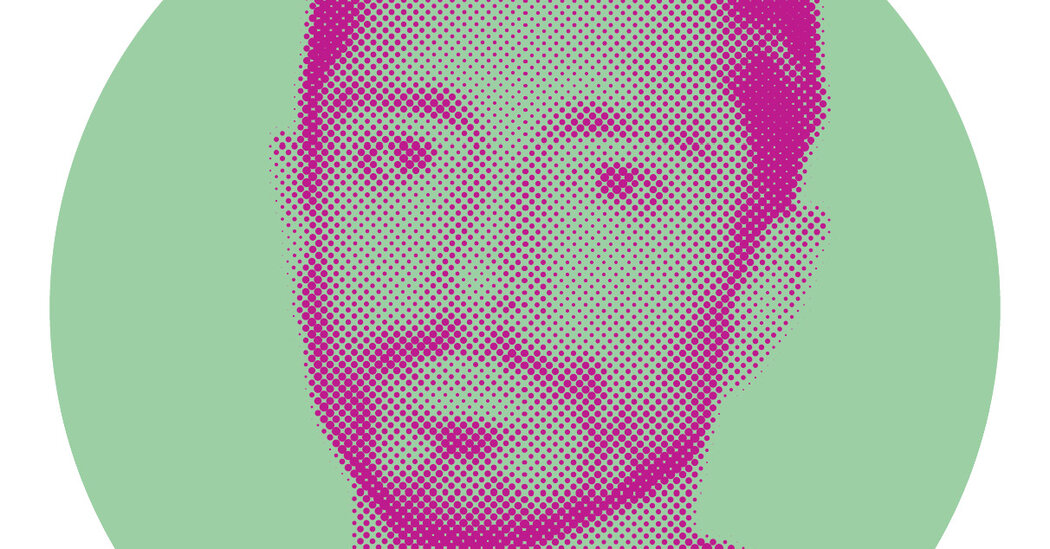 Riz Ahmed, the British actor, rapper and activist, tends to speak in paragraphs filled with vivid details. But in his latest role, as a punk-metal drummer who loses his hearing, he learned a different way to express himself.

“As someone who plays a lot with words — spoken word and poetry and other stuff — it really forced me to step out of my comfort zone,” Ahmed said of “Sound of Metal,” which premieres in theaters Nov. 20 and on Amazon Prime Video Dec. 4. “I think it opened me up physically in subtle but also quite profound ways.”

When they first met to discuss the movie, the director Darius Marder laid out the terms: Nothing would be faked — not the drumming or the American Sign Language central to Ahmed’s character, Ruben. After some initial trepidation, Ahmed decided he was up for the challenge.

“Suddenly these two things that were quite daunting got me excited,” he said. So for seven and a half months he “stopped the rest of my life,” he said, and diligently studied both.

His life now resumed, Ahmed — an Oxford grad whose résumé includes “Rogue One,” “Jason Bourne” and “Venom,” as well as a lead actor Emmy for HBO’s “The Night Of” — spent lockdown in London this spring. In March, his conceptual album, “The Long Goodbye,” addressed his “feeling like your country’s breaking up with you” in the wake of Brexit.

In a Zoom interview from Twentynine Palms, Calif., where he has been shooting “Invasion” with Octavia Spencer, Ahmed elaborated on his cultural essentials — “things that I turn to at different moments to recalibrate or go back to the well,” he said. “Things that speak to my identity.”

These are edited excerpts from the conversation.

It’s a film that I stumbled across when I was a teenager. It was showing late night, a subtitled black-and-white movie. Normally I would have changed the channel. But it was so stylish in how it was shot and edited, and these characters that would jump bursting out of the screen were characters that I felt I recognized. It opened me up to a different kind of cinema.

I feel like it’s a timeless movie, sadly. It’s about riots in the wake of a police-brutality killing in Paris, and it’s something that resonates today. It’s a story of adolescent malaise and marginalization and what that combination can do. But it’s also a hilarious film. It’s a very youthful film. It gives me an indescribable feeling.

He was a master of the dark satirical short story. He was put on trial for indecency, purely because he chose to portray lives that were not considered worthy of being portrayed. I’ve never been able to sit still for very long, so I’ve always had a tormented relationship with reading. Some of his stories are under a page, but they cut so deep.

He has written about the horrors of partition. He has written about displacement, about how these labels of nationality and identity are fluid. It’s like building a hut on quicksand, and that speaks to my own experience as a child of immigrants and someone who travels a lot. One short story, “Toba Tek Singh,” was particularly an inspiration to me on “The Long Goodbye.” Toba Tek Singh is someone who refuses to pick a side, who decides to build his home in no man’s land. That idea is something that I’m trying to do with my work.

3. Rainer Maria Rilke’s “Go to the Limits of Your Longing”

It speaks to a spirituality that I can just get down with — this idea that divinity lives in the shadow of our actions. It resonates with the verse from the Quran about God’s light being described as a lamp in a niche. And it’s a metaphor I’ve returned to on “Can I Live.”

In the ’90s there was this moment of celebrating multiculturalism in the U.K. Sanjeev Bhaskar and Meera Syal created “Goodness Gracious Me,” this groundbreaking sitcom like “Key & Peele” or “Chappelle’s Show.” With hits like “Bend It Like Beckham” or “Bhaji on the Beach,” suddenly we were on the screen. And it wasn’t actors browned up doing Apu accents. This was us. Similarly, in music, Bally Sagoo coming up with these remix cassettes where you’d take hip-hop beats and Bollywood beats, and you’d buy them at a local paan store. I pay homage to this in a short film called “Daytimer.” A big part of this culture was daytime raves, because South Asian girls with strict conservative families weren’t allowed out at night. So we would do all of our parties in the daytime. And you could go and then put back your school uniform, and no one would know any better.

Aziz Mian was a qawwali singer. And qawwali is a genre that I’ve been increasingly taking an interest in as I think about how I can pull from my own cultural heritage and contribute to hip-hop, which I’m so cognizant is a Black art form. Qawwali is an amazing template to create within authentically, in that it’s a mixture of a kind of rap and spoken word and singing. It’s a Sufi tradition of gospel jazz. It’s improvised and quite punk, but it’s also quite devotional.

Aziz Mian was iconoclastic. He was deeply controversial. “Sharabi” means alcoholic, and what he says in the song is, “I’m an alcoholic, I’m an alcoholic.” And what he’s talking about is the intoxication of divine energy. It was mind-blowing for me, because it’s this tightrope of the sacred and the profane that you often have in qawwali, and that Aziz Mian took to its limit.

It’s an album that keeps on giving. I revisited the track “Love” the other day. When I first came to this album I was a teenager. When I’ve returned to it now in my mid-30s, I’m recognizing like, oh, wow, he’s referencing bell hooks when he talks about, “Is this the pain of too much tenderness?” You know, when bell hooks talks about how men might run from love because of the pain of making yourself vulnerable. But what he’s talking about is writing and the idea of losing yourself within the ink that spills onto the page.

We have this very proud tradition of sound-system culture that comes from the Jamaican influence in London, which is huge. And from that, we put it through our blender to create these new genres of music every few years. It’s drum and bass, it’s jungle, then it’s garage, then it’s grind, then it’s dubstep, then it’s drill. There’s something just so restlessly creative in London’s concrete. Whenever I finished a film in America, I used to give people USB sticks of a playlist that would educate them on U.K. rave music. U.K. Apache’s “Original Nuttah” is a great primer into what jungle music is. You’ve got a British-Iraqi guy who has named himself Apache Indian, rapping in a mixture of cockney slang and Jamaican patois. I grew up speaking Jamaican slang. I was 20 before I understood they were Jamaican words.

Roy Davis Jr.’s “Gabriel,” sung by Peven Everett, is actually a U.S. garage track, but it takes places in that transition between [U.K.] house and garage. It’s an anthem, really. I think a lot of people in my generation would be like, “Play it at my funeral.”

But the most recent manifestation that’s close to my heart is Jai Paul’s 2013 leaked album, because it blends together all that amazing U.K. music and Black music with Bollywood music and Indian music. He’s created a language that really resonates with me.

A couple of years ago, I decided to start buying small bits of art. The piece that really means a lot to me is a print by Raghu Rai. He took a photo in the late ’70s or early ’80s called “Life Outside Jama Masjid,” which is one of the main mosques in Delhi. It’s a guy who looks a little bit down on his luck — he might be drunk or stoned — and there’s a woman holding him by the cheeks to cheer him up. And there’s a crowd of people who are possibly more on the fringes of society that are gathered outside this mosque to cheer each other up. It struck me as what religion can be about at its best, providing a space of dignity for people who may not feel like they’re afforded dignity elsewhere.

I started buying Mughal miniatures under the tutelage of Navina Haidar, the curator of Islamic art at the Met museum. It’s so crazy that as brown creatives, we don’t know about our heritage. How are we going to move forward unless we know where we’re coming from? I’ve got quite a morbid piece called “Thief in the Night,” from like the 1400s. It’s a miniature of a thief breaking into someone’s house and killing him. But it’s painted so beautifully. I also got to know Salman Toor’s work when I was preparing for “Sound of Metal.” There’s this amazing piece called “East Village Apartment.” It’s this Pakistani guy who’s in his apartment, and he’s got all these books on his table about Indian painting and Pakistani history. He’s trying to do his best to understand where he comes from. But he’s got his head tilted back in exasperation with a glass of wine in his hand, and out the window you see a downtown mosque. And he can’t bear to look at the mosque and he can’t bear to look at the books. I thought it was a beautiful depiction of this busy limbo that so many of us live in.

So I bought plants during lockdown. Changed my life. I love them — they’re my babies. Alocasia zebrina is a beautiful plant because it’s like the elephant ear, but it’s stripy like a zebra on the stems. And what’s crazy about it is how much they arch toward the sun. They’re so cheeky. They’ll go all the way to try and hit the window. I didn’t know what I was doing for a while and I only had one leaf left. And it snapped, and I was mortified. I thought it was done. But it was so resilient, and I managed to stake the plant and to fertilize it and now it’s sprouting babies. It’s just so satisfying. As someone who has grown up in a city, I never thought the countryside was really for me. It’s connecting me to nature in quite a personal way.

10. His Mum’s Do Pyaaza Recipe

“Do pyaaza” means from two onions. It’s a very simple curry dish that during lockdown my mum taught me, like, “Here’s something you can make and not screw up.” The onions caramelize, so it’s a cheap way of having a sweet curry. Quick to make, very fresh, not too oily, not too much of a sherva to it. My mouth is watering as I’m talking about it. It just tastes like home to me.

Terrorist killed, 2 injured as Army foils infiltration bid along LoC in Jammu and...

Your Kid Doesn’t Need to Be LeBron or Serena