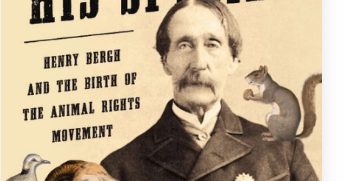 Henry Bergh, a wealthy New Yorker who devoted himself to changing the way people in his city and around the United States treated animals, founded the American Society for the Prevention of Cruelty to Animals in 1866. In “A Traitor to His Species,” the historian Ernest Freeberg tells Bergh’s story. On the podcast this week, Freeberg talks about the book, including what motivated Bergh to take on this crusade.

“What he really hated was human cruelty,” Freeberg says. “People considered him to be the great animal lover of the 19th century, but in fact he didn’t really like animals that much. He didn’t own pets, he didn’t express any real affection for animals, but he hated human cruelty. He was part of a wider movement of reformers in this period who considered human cruelty — particularly male cruelty — to be a problem that could be solved, not just an inevitable part of life.”

The award-winning children’s books author and illustrator Christian Robinson, whose new book is “You Matter,” visits the podcast this week to talk about his career, including how he goes about choosing which projects to take on.

“These things take time, they take me about four to five months to illustrate a whole book. It’s a commitment,” Robinson says. “There are a lot of books out in the world, and I want to put something out in the world that I feel might be needed, that I need to see in the world. Sometimes I’m almost having a conversation with my inner child: What is the book that I would have loved to have seen on a bookshelf?”

Also on this week’s episode, Alexandra Alter has news from the publishing world; and Emily Eakin and Joumana Khatib talk about what people are reading. Pamela Paul is the host.

Kemba Walker Is Smiling as He Reads This

Australia’s Stinging Trees: Please Do Not Pet Them