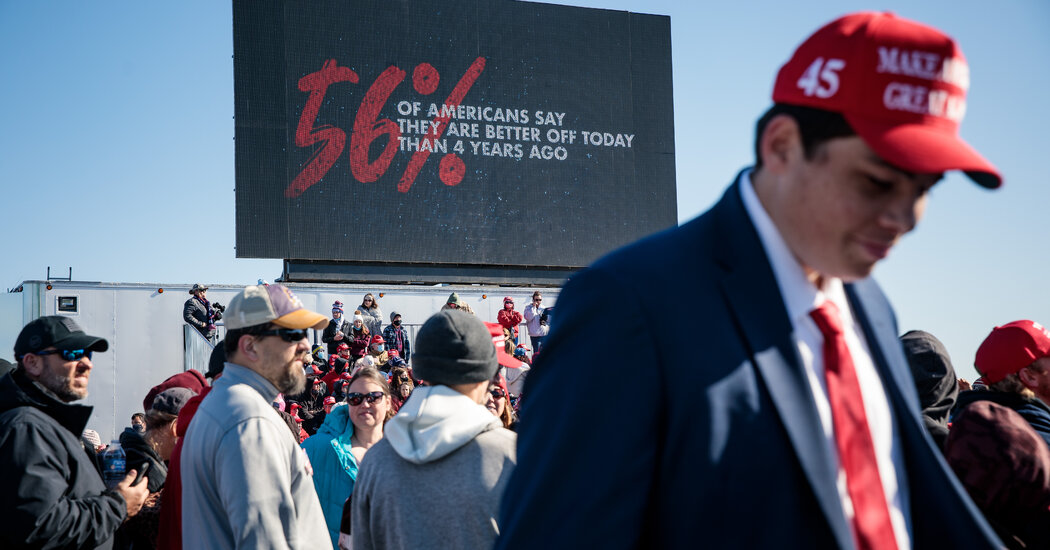 There will be more than a few conservatives who will spend the next 30 years trying to prove the election was stolen. Others will insist Donald Trump would have won save for a deep state, the liberal media and disloyal Never Trumpers. And many will argue that Trump was a successful conservative president who scored important policy victories and broadened the G.O.P. base, only to run aground on a once-in-a-century pandemic that would have wrecked any presidency.

Reality is otherwise. Trump’s loss is entirely on him — albeit in ways that roundly indict the conservative movement that made him its hero.

About the loss: It was narrow when seen narrowly in the vote tallies of battleground states. It was broad when seen broadly.

He lost the Midwestern states that gave him his victory four years ago. He appears to have lost Georgia, which he carried easily four years ago, as well as Arizona, which no sitting Republican president has lost since 1932. What ground he gained among Latino and Black voters, according to early exit poll data, he more than lost among white men, particularly those with college degrees, not to mention seniors.

Certain half-clever conservative commentators have noted that Trump improved on his 2016 vote total by several million votes. But Joe Biden improved on Hillary Clinton’s total by even more.

Most remarkable: Trump lost despite 56 percent of Americans saying they were better off now than they were four years ago, according to a Gallup survey from September. He lost despite Republicans gaining seats in the House, doing well at the state level and having reasonable hopes of holding the Senate. He lost despite the damage that progressive rhetoric about defunding the police and banning fracking did to some Democrats. He lost despite all the usual advantages of incumbency.

Trump lost for two main and mutually reinforcing reasons. The first is that he’s immoral — manifestly, comprehensively and unrepentantly.

The immorality didn’t just repel his political opponents. It enraged them, inspired them, drove them to the polls and gave Biden exactly the opening he needed to run on a winning message of unity and decency.

Trump’s immorality also blinded him to his opportunities. He could have mended fences with his opponents. Instead, he consistently sought to humiliate them in ways that proved self-defeating: Think of John McCain and the Obamacare repeal vote. He could have spent the past eight months as the nation’s consoler in chief, a role nearly every past president has gracefully played. Instead, he went from denier in chief, to quack doctor in chief, to false promise maker in chief — everything, that is, except the steady and compassionate figure the country desperately needed in the White House.

The second reason Trump lost is that conservatives never tried to check his immorality. They rationalized, excused, enabled and ultimately celebrated it. For Trump’s presidency to have had even a faint chance of succeeding, he needed his allies and fellow travelers to provide reality checks and expressions of disapproval, including occasions of outright revolt. What he mainly got was an echo chamber.

The process began before Trump’s election, when conservative pundits thrilled to the idea that Trump’s serial violations of moral and ethical norms were signs of strength and authenticity, as opposed to simple depravity. Just as ignorance was strength in George Orwell’s “1984,” shamelessness became virtue in Trump’s G.O.P. The strategy of moral inversion appeared to be vindicated four years ago, since none of Trump’s successive scandals prevented his victory.

In Trump’s conservative universe, nearly everyone became a lickspittle. Among his fervent supporters, or those who drew better ratings or poll numbers from his presidency, this was at least understandable. They had TV careers to preserve, political jobs to fill, a cult leader to worship.

Less forgivable was the political Manichaeism turned into moral nihilism: When the left is always, definitionally, “worse than the right,” then the right feels entitled to permit itself everything, no matter how badly it trashes conservative policies (outreach to North Korea), betrays conservative principles (trade tariffs), debases the office (arms-for-dirt with Ukraine) or shames the nation (child separation). Stalinists used to justify their crimes in much the same way.

The historic irony here is that these permission slips for Trump served the master ill. Who in the White House had the clout of someone like James Baker to set the president straight and serve as something more than a yes-man? And who in the broader conservative world — someone Trump might have seen on Fox, for instance — could explain that attempting to fool all of the people all of the time was a losing strategy? Did Rupert Murdoch or Mitch McConnell ever put in an admonitory word?

For America, this failure to do much more than flatter, defend and delude Trump these past four years is a blessing. For conservatives, it calls for a reckoning.

How Trump Can Win

Overcoming Cancer, Postponements and a Hurricane