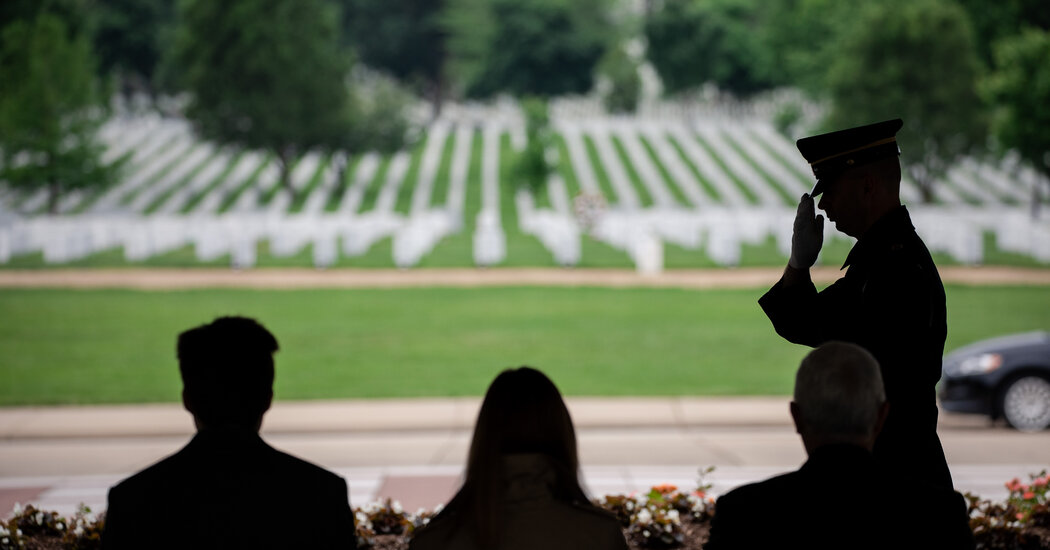 “I don’t get it,” President Trump is reported to have said in 2017 while standing at Arlington National Cemetery. “What was in it for them?”

Taken out of its vile context, the president’s question doesn’t have an immediately obvious answer, and the reflexive barrage of veteran worship that came in response didn’t shed much light. As with similar past flare-ups, this one was quickly extinguished with the mass incantation that America’s troops “defend our freedom.”

It’s nice to know people think that, but in the five years I spent in the U.S. military, I never met anyone who seriously thought that’s what they were doing. Soldiers who talk that way are usually in basic training, or making up for a lack of combat experience, like the civilian who overcompensates for never serving by lighting Colin Kaepernick jerseys on fire.

Truth to tell, very little of a soldier’s time is spent guarding the “American way of life,” as the Soldier’s Creed has it, and motivations tend to be fairly straightforward. Shooting an anti-tank missile at a Toyota Hilux, lighting up a fuel tank with a 50-caliber machine gun, getting blisters and dysentery and going to sleep cold and hungry in a dirt hole — these are all part of a rich personal and fraternal experience that doesn’t necessarily require any higher source of inspiration.

In 2014, I joined one of the military’s most lethal career fields, the Army’s bomb squad. I wanted the adventure and glory of Special Operations, but knew I wouldn’t make a good “doorkicker,” which left helicopters and bomb disposal. I’d seen the “Hurt Locker” recently, and the decision was a quick one. (According to the medical community, the rational part of one’s brain doesn’t fully develop until age 25.)

In the end, I got most of what I thought I wanted: adventure, camaraderie, swag. But glory, alas, lay just out of reach. I deployed to five countries in the Middle East and Central Asia, but I never fought a great battle, never defused a suicide vest with my bare hands, never liberated a village whose name I could lend to my memoirs. It’s a curious agony, not being shot at. Without such scars, one fears being seen — strictly within military circles, of course — as a loser or sucker.

Fresh from that experience, I’ve been thinking about a better answer to Mr. Trump’s question. What was in it for me?

It is never desirable to put troops in harm’s way, but remember to enlist is to expect just that. Many soldiers actually get upset when something goes badly wrong and they miss it.

A soldier in my platoon hadn’t skipped a combat patrol for over two months, during which he saw no action. One morning he came down with the norovirus and spent the day vomiting. When the patrol left that night, he stayed behind. The team proceeded to engage in a protracted firefight, complete with explosive belts, exploding trucks and enemy bodies. I’d never known him to sulk, but for the rest of the deployment he was nearly catatonic, struggling to conceal the depths of his melancholy.

About a thousand kilometers away, on a small base, I shared his misery. We sometimes saw nearby ballistic missile fire and would get alerts on our phones and computers instructing us to seek shelter from incoming projectiles, which we took as our signal to run outside and capture the attack on Snapchat. But the missiles were consistently inaccurate, and the air defense systems were frustratingly competent.

If being a hero is hard, and defending your way of life is not really part of the job, what makes a good soldier? Some big things, but mostly small ones. There are the true warriors, the Audie Murphys and John McCains. They belong to a rare caste I don’t pretend to understand. Suffice it to say the soldier you thanked at the airport probably wasn’t one of them.

A good soldier loves her job, and spends her free time becoming world-class. She guides younger soldiers through the byzantine promotion system, and protects them from the bureaucratic predations of higher headquarters. She has an eye for destructive behavior. She is obsessed with training her soldiers, but takes no credit for their success. She puts the mission first, but she also makes sure no one misses a graduation, an anniversary, a soccer game that doesn’t need to be missed. None of that gets you eternal glory. It just repays your soldiers’ trust, which they have no choice but to give you.

But the soldier you thanked at the airport may not be much like her, either. Soldiers are like schoolteachers. Some relatively small number are exceptional, the best America has to offer. Some small percentage are toxic, capable of ruining lives and entire organizations. And a large portion sit somewhere in the middle, meeting whatever standard has been set to keep the machine running, serving their country, earning their pay, and working toward their pension, along with a few wild stories to regale friends and family.

Soldiers are like teachers in another way: It’s hard to screw up so badly that you lose your job. Everyone in the military knows this (and knows someone who should’ve been kicked out but wasn’t), which is why many service members regard the arbitrary gratitude of sycophantic strangers with a mix of appreciation and ridicule. They know these are just the trappings of America’s post-draft bargain. Under the terms of this deal, less than half a percent of Americans serve in the active-duty military, and everyone else agrees to revere them.

When I first enlisted, I was surprised how many of the people in my life suddenly had stories about how they once — almost — joined the military, too. If it wasn’t for this asthma medication or that knee surgery or an ailing relative, my progressive California suburb apparently would’ve been overrun with military recruits. None of them took the idea seriously enough to discover that the military has had enlistment waivers for such things. But I got the point. Even people who didn’t want or have to serve still seem strangely self-conscious when faced with those who chose to, or had no choice.

When asked why I did it, I usually prattle on about patriotism and giving back. That’s part of it, too. But I still don’t have a frank, pithy answer, because when I think back, I don’t really know. I don’t know why anyone does it, other than that it’s a good job with a slightly higher risk-reward ratio. There are certainly other jobs to choose from, even if glory is what you’re after.

It is a trying and amusing life. Within a few weeks of taking over a platoon, a newly minted lieutenant nursing martial fantasies will quickly find herself occupied instead with a parade of eccentric melodramas: one soldier’s former spouse demanding disciplinary action under Article 134 of the Uniform Code of Military Justice for giving her chlamydia; an angry call from the president’s Secret Service detail accusing a soldier of helping himself to a morning buffet without wearing pants.

Even in the heat of the fight, she may find herself less the protagonist of an epic than the bewildered witness to a series of bizarre spectacles: a soldier testing out a new-generation armored vehicle by intentionally driving it over an I.E.D.; a soldier trying to locate a buried vat of white phosphorus by kicking the ground and lighting his foot on fire.

There are the long nights and early mornings, the compressed discs and fractured hips, the last-second missions and ambiguous orders, the cutting-edge technology and shortages of food, the labyrinthine bureaucracy and paperwork. There are the waits, delays, postponements, setbacks, extensions, reversals, retractions and cancellations, the myriad spouses and children cowed by experience into anticipation of disappointment.

I take my hat off to the hundreds of thousands of Americans who make the military a life’s work. I didn’t do in five years what many of them have done in an afternoon, and to the military they will give the remainder of their youth, if not, in the end, their lives.

As for me, I’m finished. I left last year, and for whatever reason, I hadn’t thought about it much since. But back in September, when I saw reports of Mr. Trump’s comments at Arlington, certain memories resurfaced.

I got out the pictures, the videos, the passports, the patches, the uniforms. My old helmet, my old bag of tools. It was an odd sensation. I felt as though I was never a soldier, so much as I played one once. Would that have been different if I’d been shot? If I’d liberated a village? If I could point to a great cause and say, “I fought for that.” In a word, if I found meaning?

It’s only at the end, when you think less of the battles you fought than the places you saw and the people you loved, that you realize there was meaning all along, and that’s what was in it for you.

Jeremy Stern (@JeremySternLA) was an explosive ordnance disposal officer in the U.S. Army from 2014 to 2019.

Bihar Assembly Election Results 2020: Fate of these `bahubali` leaders hang in balance as...