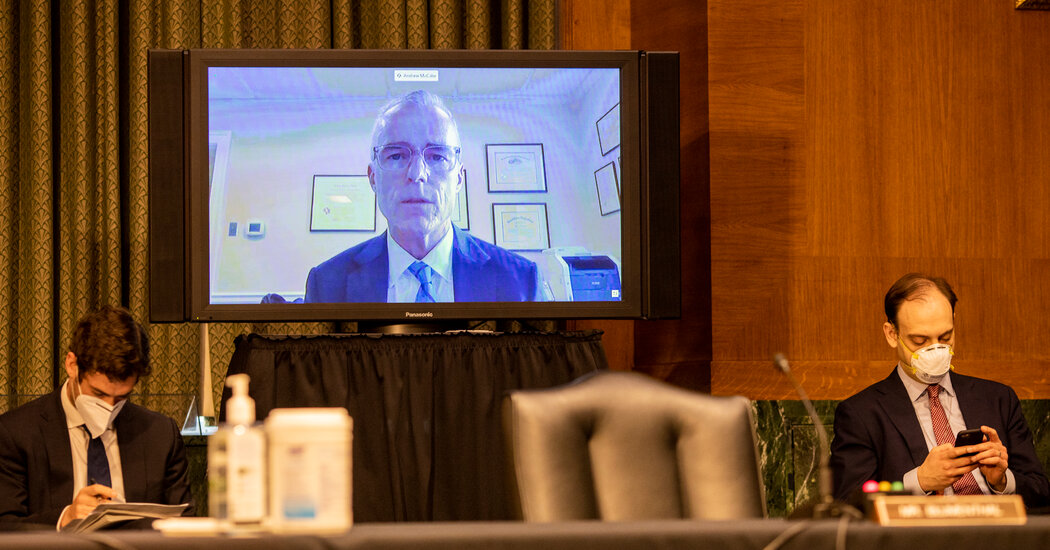 The hearing, led by Senator Lindsey Graham of South Carolina, a close ally of President Trump’s, was a recounting of perceived injustices that the president and his supporters have amplified over the investigation into the 2016 Trump campaign’s ties to Russia. They included the botched applications to wiretap the former Trump campaign adviser Carter Page, the treatment of the former national security adviser Michael T. Flynn and a notorious dossier about purported Trump-Russia links.

Senator John Cornyn of Texas accused the F.B.I. of going “rogue,” while Senator Marsha Blackburn of Tennessee said the bureau had a “culture of corruption and cover-up.” Senator Josh Hawley of Missouri described the investigation as the “biggest scandal in the history of the F.B.I.”

Mr. McCabe, who testified remotely because of the pandemic, acknowledged serious F.B.I. mistakes in the Page wiretap applications, one of which he signed. He said he would not have approved it knowing what he has learned since. “We’re all responsible for the work that went into that FISA,” Mr. McCabe said, referring to requests made under the Foreign Intelligence Surveillance Act.

A Justice Department inspector general report issued last December found egregious errors and omissions in the applications to wiretap Mr. Page in the months after he left the Trump campaign, based on investigators’ suspicions about his ties to Russia.

Republicans pressed Mr. McCabe about who at the F.B.I. was to blame for the problems. They wrongly insisted that no one had been held responsible; the inspector general’s report did assign blame, singling out an F.B.I. agent assigned as “primarily responsible for some of the most significant errors and omissions.”

The F.B.I. director, Christopher A. Wray, has said line-level employees who played a role in the Page wiretap applications were referred to the bureau’s office of professional responsibility, its disciplinary arm.

The inspector general report also found that the F.B.I. had sufficient reason to open the Russia investigation and that investigators acted without political bias in doing so.

Democrats on the committee made clear they had little patience for Mr. Graham’s inquiry, believing it was a waste of time as they accused Attorney General William P. Barr of politicizing the Justice Department.

“This is a last-ditch, desperate undertaking to deal with President Trump’s grievances about that election,” said Senator Richard J. Durbin, Democrat of Illinois, accusing the Republican-led committee of holding another “partisan hearing to advance President Trump’s theories.”

Before the hearing started, Mr. Trump took aim at Mr. McCabe, a frequent target. “Republicans, don’t let Andrew McCabe continue to get away with totally criminal activity,” the president wrote on Twitter. “What he did should never be allowed to happen to our Country again. FIGHT FOR JUSTICE!”

During the hearing, Mr. Graham repeatedly accused the F.B.I. of treating Mr. Trump unfairly, saying he should have been warned about Russian attempts to interfere in the 2016 election on his behalf.

Mr. Graham pointed to a recently declassified document of unverified information that suggested that Russian intelligence had acquired information that Hillary Clinton had approved a plan for her 2016 campaign to “stir up a scandal” against Mr. Trump by tying him to the Russian hackers who had broken into Democratic servers.

Though Mr. Trump’s allies have promoted the document, other officials rejected its information after evaluating it, including the special counsel, Robert S. Mueller III, and the Republican-led Senate Intelligence Committee.

Mr. McCabe said he had never seen the document before and it was not clear to him that the information alluded to criminal conduct.

Senator Sheldon Whitehouse, Democrat of Rhode Island and a former federal prosecutor, defended the F.B.I. for not investigating the claim, noting that even information related to a possible Clinton campaign strategy did not amount to a crime but rather to typical politics.

Senator Ted Cruz, Republican of Texas, also brought up reports that advisers to President-elect Joseph R. Biden Jr. were talking to foreign leaders and compared that to the F.B.I.’s scrutiny of Mr. Flynn in connection with his December 2016 calls with the Russian ambassador during Mr. Trump’s transition.

Mr. Cruz demanded to know whether Mr. Biden and his team were violating the Logan Act, a 1799 statute that says it is a crime for a private citizen to interfere with diplomatic relations between the United States and foreign governments. Mr. Cruz eventually pointed out that the Logan Act is widely considered to be unconstitutional, saying that Mr. Biden was therefore not violating it but that it was illegitimate to “go after” Mr. Flynn for the same thing.

In a heated exchange with Mr. Cruz, who repeatedly cut him off, Mr. McCabe said that “there were no discussions of the Logan Act” regarding Mr. Flynn, leading Mr. Cruz to suggest that he might be committing perjury. But permitted to complete his answer, Mr. McCabe clarified that agents opened the counterintelligence investigation into Mr. Flynn based on something else — a suspicion that he might be a conduit between the campaign and Russia.

Notes released in connection with the Justice Department’s attempt to drop the prosecution of Mr. Flynn, despite his guilty plea for lying to the F.B.I. about his conversations with the Russian ambassador, have shown that there were discussions of the Logan Act in 2017.

In addition, on Tuesday a federal judge unsealed a set of search warrants in connection with the Flynn case in response to a news media request. They showed that by September 2017, when the bureau and Mr. Mueller’s office sought access to devices and email accounts from the Trump transition, it cited the Logan Act and false statements to a judge.

At the end of the hearing. Mr. Graham brushed off the complaints by Democrats that his investigation was pointless. “We are going to keep digging,” he said.

The House minority leader says Trump ‘will still be a player’ in the Republican...

Dr. Céline Gounder, Adviser to Biden, on the Next Covid Attack Plan

A crush of early voters makes for long waits in N.Y.C.

Jeff Bridges Says He Has Lymphoma