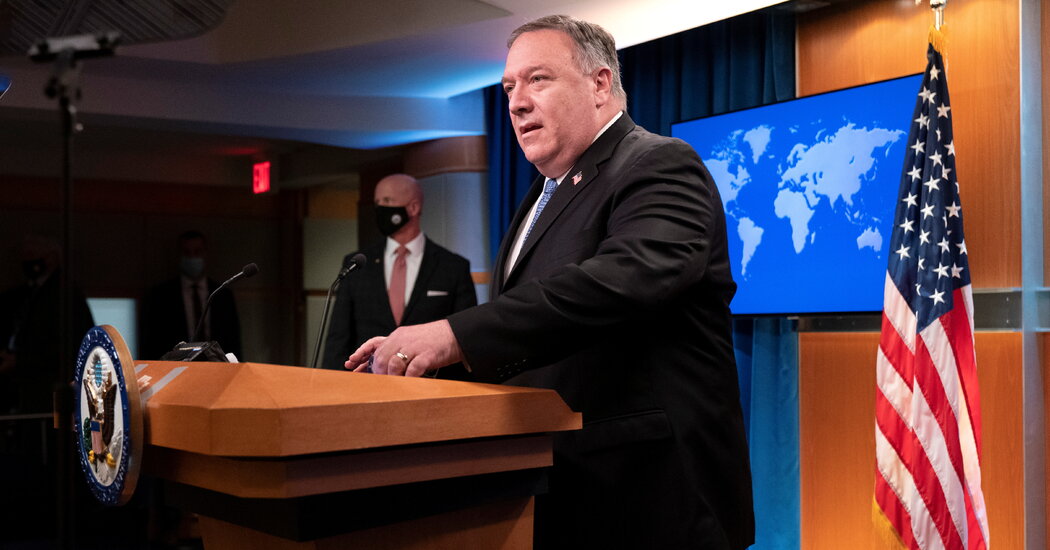 Speaking to reporters in Delaware, Mr. Biden shrugged off Mr. Pompeo’s comments, saying that his transition was moving along well and that he is confident that Republicans will eventually accept his victory.

“They will. They will,” he said. Asked about Mr. Trump’s ongoing refusal to concede the election and his vow to continue litigating the outcome in court, Mr. Biden said: “How can I say this tactfully? It will not help the president’s legacy.”

Mr. Pompeo made his remarks about the next administration in a deadpan voice, followed by a chuckle and a grin. It was not clear if he was joking and the State Department did not immediately respond to a request for clarity. Mr. Biden did not specifically react to Mr. Pompeo’s assertion that he believes there will be a second Trump term.

The secretary of state’s remark came before a testy exchange with journalists at the State Department, during which Mr. Pompeo insisted that American efforts worldwide to prevent voter intimidation and ensure free and fair elections were not diminished by Mr. Trump’s refusal to concede the U.S. presidential race, even after official vote tallies showed on Saturday that Mr. Biden had won, becoming president-elect.

Mr. Pompeo was the latest Republican to decline to publicly recognize Mr. Biden’s victory, although he also promised to ensure that the State Department remained functional and secure between now and Inauguration Day.

In monitoring foreign elections, “we often encounter situations where it’s not clear,” he said. “We work to uncover facts, we work to do discovery, to learn whether in fact the outcome, the decision that was made, reflected the will of the people.”

“We want every one of those votes to be counted in the same way, that we have every expectation that every vote here in the United States will be counted too,” he said.

Mr. Biden, in his remarks on Tuesday, said his conversations with world leaders over the last several days had been encouraging. Transition officials said the president-elect had spoken with the leaders of Canada, France, the United Kingdom, Ireland and Germany.

“I’m letting them know that America is back. It’s not America alone,” he said, adding later that he felt “confident we are going to be able to put America back in a place of respect that it had.”

Hours earlier, President Recep Tayyip Erdogan of Turkey became one of the few remaining world leaders who had initially resisted congratulating Mr. Biden to reverse course and acknowledge him as the victor.

Should You Move to France? Ask an Expat Blogger