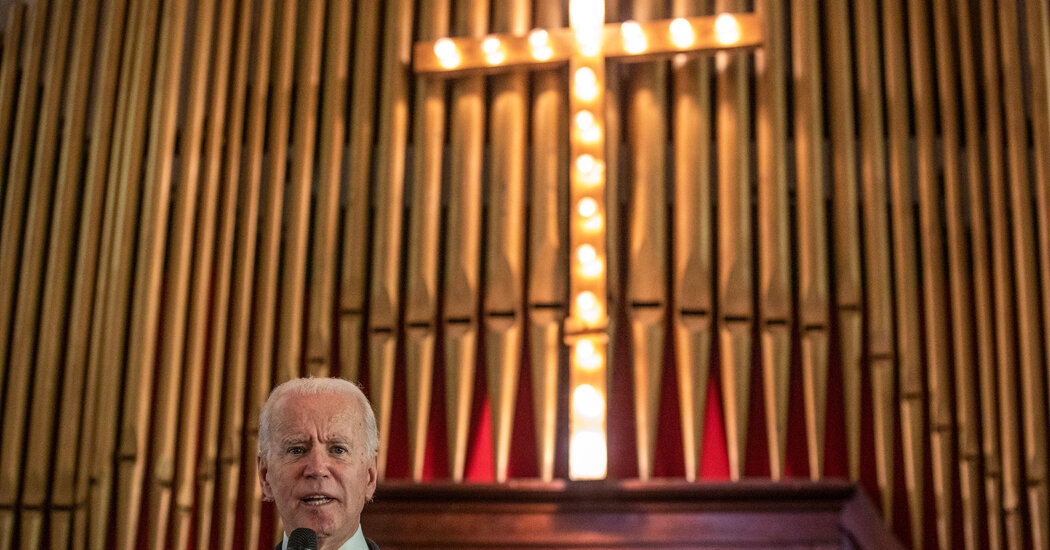 Joe Biden succeeded in his mission to end Donald Trump’s presidency, and he did so, in part, because of the wise, persistent and strategic way his campaign related to faith. This was not inevitable.

Mr. Trump’s re-election effort, like his campaign in 2016, relied on his ability to appeal to Christian voters directly, without robust competition. While Hillary Clinton certainly won among some religious communities, including people of faith who are racial or religious minorities, Democrats did not do nearly enough in 2016 to contest Mr. Trump’s explicit appeals to Christians of all backgrounds, who still comprise over two-thirds of the electorate. In 2016, Mrs. Clinton lost support among more religious demographics compared with 2012. In 2020, Joe Biden and his campaign insisted that would not happen again. Christians, and others, responded and made an essential contribution to Mr. Biden’s winning coalition.

While exit poll data will continue to adjust as the final votes are tallied, we already know that Mr. Biden’s outreach has been vindicated. Nationally, he won 23 percent of white evangelicals, closing the gap from 2016 by 11 percentage points (from 64 to 53). This amounts to a swing of well over four million votes nationally, which accounts for much of Mr. Biden’s lead in the popular vote. While there has been significant discussion of Mr. Trump’s gains among Black and especially Hispanic voters, Mr. Biden more than made up for those losses with his increased share of white evangelical support.

This shows up in key battleground states that decided the election. In Michigan, Mr. Biden won 29 percent of white evangelical support while Mrs. Clinton won 14 percent in 2016, an improvement that accounts for more than a 300,000 vote swing. In Georgia, Mr. Biden leads, in part, because he almost tripled Mrs. Clinton’s showing among white evangelicals, winning 14 percent compared to 5 percent.

Many different communities contributed to Mr. Biden’s victory; that’s why it’s called a coalition. But this is the point: Christians and other religious voters make up much of the Democrats’ base. Faith outreach is not only about reaching rural white conservatives but people of faith who are from communities that are more likely, but not certain, to vote Democratic.

Mr. Biden, a committed Irish Catholic who ran in large part because he believed he could win in the Great Lakes states Mrs. Clinton lost, proved his case by winning Catholics nationally — an eight-point, three-million vote swing from 2016, in the preliminary accounting — and keeping the margin among white Catholics close enough to win in Wisconsin, Pennsylvania, Minnesota, Arizona and Michigan. He also looks to have improved among mainline Protestants as well. We expect to learn more in the coming days about how different religious groups voted, but what is clear now is that Mr. Biden built a broad, multiethnic, multiracial, multireligious coalition that carried him to victory.

From the beginning, Mr. Biden ran a campaign that directly appealed to religious voters. His mantra of “restoring the soul of America” harks back directly to the stated goal of the Southern Christian Leadership Conference (“Redeeming the Soul of America”), one of the most striking examples of a confident Christian witness in the last century of American civic life. Mr. Biden’s campaign advertised aggressively and directly to religious voters and his general campaign ads also regularly featured faith messages and people of faith.

This focus on faith wasn’t kept to targeted slices of the electorate, but was made an integral part of the most far-reaching, high-stakes moments of the campaign, including the first hour of the final day of the Democratic convention. That night, Sister Simone Campbell delivered an invocation. Senator Chris Coons of Delaware, Mr. Biden’s close friend and a national co-chair of his campaign, delivered a speech about faith and Mr. Biden’s character and leadership. Mayor Keisha Lance Bottoms of Atlanta introduced an entire segment about the civil rights movement that unabashedly included the Christian convictions that motivated many of its leaders. Jon Meacham, the historian and a Christian himself, gave his perspective on the moral stakes of the election. Later in the night, Father James Martin, Rabbi Lauren Berkun and Imam Dr. Al-Hajj Talib ‘Abdur-Rashid delivered benedictions (Mr. Biden won the Muslim and Jewish votes by significant margins), with Father Martin directly mentioning the unborn in his prayer (as did the Rev. Gabriel Salguero in his invocation earlier in the convention), which communicated that pro-life voters were included in Mr. Biden’s vision for the Democratic Party and the country.

The Biden campaign’s concern for faith voters was evident in its staffing as well, which included a faith outreach team, led by Josh Dickson, that relentlessly communicated to diverse communities of faith that the Biden campaign wanted their vote. Other Biden campaign aides, like Jen O’Malley Dillon, Mike Donilon, Greg Schultz, Bruce Reed, Ashley Allison, John McCarthy, Sheila Nix and others have long histories working with the faith community, so it wasn’t just Mr. Dickson who was attentive to these dynamics.

Mr. Biden’s campaign’s emphasis on faith made the work of outside groups focused on faith more sensible and effective. Not Our Faith PAC, where I served as a senior adviser, focused on explaining why millions of Christians would oppose Mr. Trump’s re-election, trying to head off what we knew would be an increasingly desperate and ridiculous series of appeals to religious voters in the final weeks of the campaign. Other efforts, like Faith 2020, Christians Against Trumpism & Political Extremism, Vote Common Good and Pro-life Evangelicals for Biden, played critical roles in the campaign.

The Biden campaign’s approach to faith undermined Mr. Trump’s claims that Christians need him to protect them. Mr. Biden’s stubborn insistence on not demonizing those who disagree with him, even during the Democratic primary, did this as well. He left space open for those who disagreed with him on policy issues to join his campaign to defeat Mr. Trump.

The approach Mr. Biden took toward building such a coalition brings great benefits, but also significant responsibility. If you run a campaign suggesting you’ll be president for all Americans — that we do not need to see our political opponents as enemies, as Mr. Biden said in his victory speech on Saturday — the American people have the right to expect you’ll govern like it.

If past is prologue, conservative activists will portray a Biden administration as attacking Christians and their values. I do not expect that there is any plausible approach from a Biden administration that would prevent this. But the Biden White House can take steps to undercut right-wing efforts to promote feelings of embattlement among religious conservatives, even in the first hundred days of the new administration. As President Barack Obama did, they can wait to act on overturning the Trump administration’s version of the so-called Mexico City Policy, which withholds federal money from international NGOs that “perform or actively promote abortion as a method of family planning,” until after Jan. 22, the anniversary of Roe v. Wade, as a signal that while there will be disagreements about abortion policy. they’re uninterested in promoting a new round of culture wars. Similarly, Mr. Biden has the opportunity to forge a broad consensus on L.G.B.T.Q. rights that affirms pluralism, protects religious freedom and rejects a zero-sum approach that would lead to years of divisive litigation.

This kind of care is important, but it is insufficient to break the fundamental relationship between faith and our political parties that has so hampered our politics over the past 40 years. To do that, Mr. Biden should announce a national service agenda that invites all Americans — including, explicitly, people of faith — to contribute to the nation’s well-being in new ways, repairing the injustices of our past and helping America get through the challenges that confront us today, including this pandemic. He should invite Christians to build America’s future, rather than cede to Mr. Trump’s dark pronouncements that Christians must fear it. If the Biden administration can offer a positive vision for Christians in this country while earnestly seeking to limit unnecessary political conflict with moderate and conservative religious voters, it can do through governing something it did not fully accomplish on Election Day: the end not just of Trump’s presidency, but a thorough repudiation of Mr. Trump’s brand of politics.

Policy disagreements are inevitable in a country as big and diverse as ours. But let us also remember as individuals that our politics are not just about us. Every chance to take a disagreement as a personal affront does not have to be taken up. Our politicians will be less tempted to appeal to our worst instincts, to try to make us hate those who disagree with us on policy, if we make it clear to them that we will reject their attempts to do so and consider such attempts to be provocations. This is a tall order, as evidenced even in the last few days as we have seen conservative media voices and Republican politicians who prefer to sell the fiction of widespread voter fraud instead of the reality that sometimes you lose an election.

The best way Christians can show there are some things more important than politics is to stop treating politics like it’s unimportant except for when their own personal interests are at stake. If we look to politics to find reasons to be offended, we’ll never come up empty-handed. But this is not only an unproductive way to think about politics, but a destructive one. People of faith should be at the very center of making our politics about the common good, about service. I hope we take that opportunity.

I became an evangelical Christian during the middle of the George W. Bush administration. I disagreed with much of evangelical politics, but I saw in the faith something that could not be summarized by politics. The most important thing about me, my faith, was shared by people I proundly disagreed with on politics. My faith influences my politics, but my politics is not my faith, and I have learned and gained much over the years from Christians with whom I disagree on politics.

Over these past four years, though, we have seen a president who positioned himself as a spokesman for Christianity but does not seem to believe that Christianity is bigger than politics. It often seems, in fact, that he does not believe Christianity is any bigger than himself. And because of this, and the fact that there are notable Christian leaders who uncritically support him, many in this country have come to doubt whether Christianity — evangelical or not — has much to offer them at all, that maybe it’s all a game. But it is precisely as a Christian that I feel compelled to address our political dysfunction directly.

Mr. Trump has been defeated, even if he has yet to concede. We now have the opportunity to restore the soul of America, yes, but that is not a job a president can do alone. We require leaders who intend to serve — not just to be served — but that too is not enough. We must ourselves become the kind of people our politics and our nation need.

Americans May Not Be Welcome in the E.U.

India to soon get dairy for donkey milk, one litre milk may sell for...

Canada Reopens, but Little Returns to the Old Ways