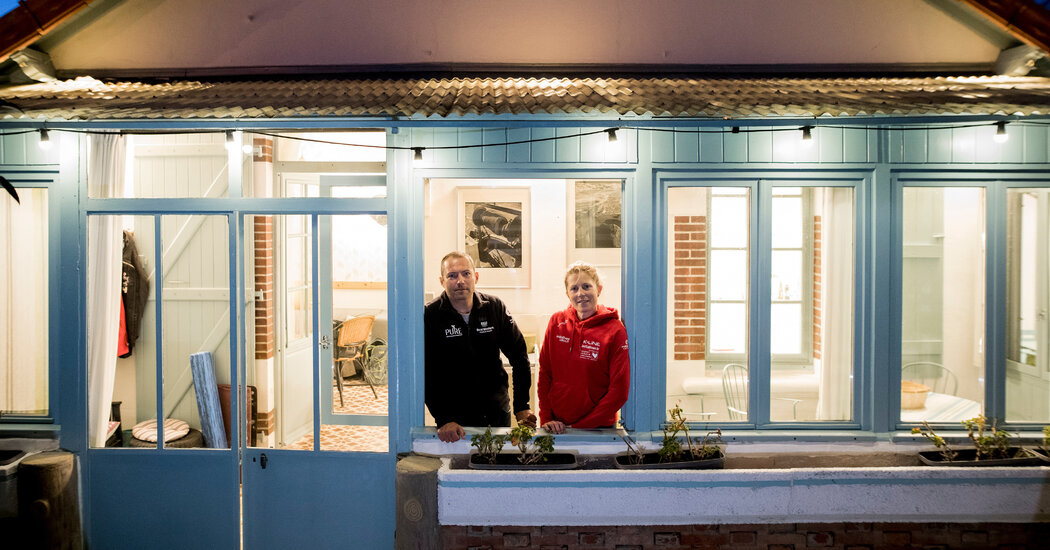 Before beginning the Vendée Globe, a solo, nonstop around-the-world sailing race, Romain Attanasio could only describe the preparation as complicated.

Sure, there was sorting out the sails. And fine-tuning the navigation systems and acquiring and storing three months worth of freeze-dried food and troubleshooting myriad technical issues, all while dealing with the pandemic.

But the real complication was the skipper in the next room, Samantha Davies, who is his life partner, the mother of their 9-year-old son Ruben, and for this race, a competitor. An accomplished British ocean sailor, Davies was among the 33 sailors on the starting line Sunday, too.

They are the first couple to race in the Vendée Globe, which covers 24,000 nautical miles over nearly four months and is run every four years, starting and ending in the Vendée area of France.

In a phone interview from Les Sables-d’Olonne, France, the rough edge of the North Atlantic where the race starts, Attanasio likened the two of them racing to any working couple seeking a balance with the division of labor at home.

“It’s like in traditional family fishing,” Attanasio said. “The husband goes fishing and the wife sells the fish. The work goes well because the two work together, like when Sam is sailing and I am with Ruben.’’

Said Davies, “For both of us, it’s our dream. We used to take turns, but as Ruben gets older, we are sharing a lot more of our experiences.”

This took a lot more calibration.

Davies and Attanasio arrived together in Les Sables-d’Olonne late Thursday after dropping Ruben off at school. Davies’ parents are now taking care of her son, as they have each time the pair leaves for a race.

This time, however, “there’s no one to help with the details,” Attanasio said. “Normally you can just grab your sea bag and head off to the race while the husband or wife takes care of everything, but one of us has to deal with the rental house.”

Splitting up their training over the past two years, each taking turns being with their son while the other is at sea, is distinct in the hyper-focused world of solo sailing. Once working on each other’s campaign in the past, they are now competitors but they are not competitive with each other, mostly because Davies is probably going to be a front-runner in her more modern sailboat.

Her boat reaches 30 knots. Attanasio has a slower, older-generation boat that is competitive with about half the fleet, though mishaps and sea conditions can make for unlikely gains.

Still, he knows his place.

“I’m sure she can win the race,” he said. He added in a lowered voice, “She doesn’t like when I say this because it puts too much pressure.”

In France, Davies and Attanasio are considered a power couple. They met in 2003 during their first foray in the Solitaire du Figaro, a cutthroat solo racing circuit on the west coast of France that feeds the best skippers into events like the Vendée Globe.

“I worked for six months to attract her. It was a big job,” Attanasio said.

Though Attanasio was already part of the French solo sailing scene when Davies arrived, Davies had the richer background in the sport. She grew up on a sailboat and her grandfather was a submariner. She wears his St. Christopher medal while at sea for good luck.

Attanasio’s heritage is in the mountains of Savoie. “I made my grandfather cry,” he said, “because I prefer the sea to the mountains.”

Having finished fourth in her first attempt in the 2008 race, Davies had the heartbreak of a broken mast shortly after the start of the 2012 Vendée . Though she was a star in France, it was her role as leader of an all-female team in the 2014-15 Volvo Ocean Race that cemented her status as one of the top female ocean racers in the world.

With a new sponsor, Initiatives-Coeur, Davies, one of six women in the race, has modified an older generation boat with sharp hydrofoils to keep up with the eight new boats built for the race. Her experience gives her a shot to be the first woman, and the first non-French sailor, to win.

“Sam is into pacing herself,” said Charlie Dalin, a Frenchman in the race for the first time and a favorite with a newly designed boat. “She often catches up. For me pacing is a big unknown. Like a half-marathoner. First time he goes for a marathon, he has a question about pace. She’s been around the world before. She should do something better than her boat’s performance. She could be there.”

Every winner of the Vendée Globe since 2000 has come from the ranks of Pole Finistere Course Au Large, an elite, invitation-only cooperative that focuses on solo ocean sailing performance. There are eight sailors in the race from the team. Only Alex Thomson, a British sailor who finished second in the last Vendée with a broken boat and is now in his fifth Vendée , is considered a true threat to that streak.

Jeanne Gregoire, Davies and Attanasio’s coach at Pole Finistere, said that at the team they kept their relationship all business.

“They give their opinion,’’ she said. “They are part of the team. The only thing we notice is hearing them talk on weekends, ‘Do you stay with Ruben, or do I stay with Ruben?’”

Davies inspired her partner to do the 2016 race. “She was a very good help,” Attanasio said of the last campaign. “Sam is very good with computers and with autopilots. She also managed all my communications. She took everything and put it on Facebook. When I’d send a good movie, she’d call all the journalists in France to say, ‘Can you please put up this movie?’”

Last year, when Attanasio was looking for a team, Davies told Attanasio he needed to find someone who did what she did, because she was sailing. “I didn’t realize all the work she did for me,” he said.

After Sunday’s sunny start, the fleet was in fresh winds at high speeds with the newer boats predictably outpacing the others on their way to the doldrums, the first major transition in the race where the Northern and Southern Hemisphere’s weather systems converge to produce light and unpredictable winds.

Davies and Attanasio know they will be worrying about each other.

“Four years ago, I call home and have news to talk with Sam and my son,” Attanasio said. “It will be different. Harder. Sam will receive more news from her parents so she will share with me. We will communicate almost every day on email. You can come back to it and reread when you’re calm, like a special letter from 20 years ago.”

On paper, Davies will land back in France to see Ruben sooner than Attanasio. And she’s at peace with their decision to both race in this year’s Vendée Globe.

“Our son loves what we do. He’s not jealous of our boat,” Davies said. “Not every family or mum can do this. It’s like in the military or navy when parents leave for a long time. He knows nothing different. He knows we love him when we leave him with my parents.”

James D. Wolfensohn, Who Led the World Bank for 10 Years, Dies at 86

While America Looks Away, Autocrats Crack Down on Digital News Sites

Susan Collins Hasn’t Changed Much, but Maine Has

Suggestions, Distractions and Diaries. Our Staff Is an Open Book.

James D. Wolfensohn, Who Led the World Bank for 10 Years,...