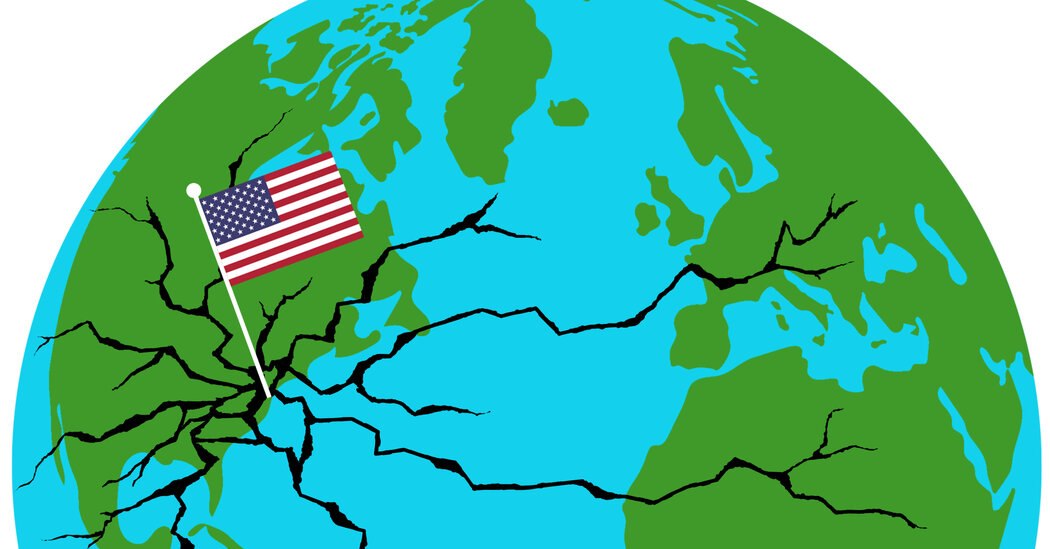 Of the countless challenges President-elect Joe Biden will face when he assumes office, few will be as daunting as reversing President Trump’s legacy of bulldozing multilateral institutions, ripping up past international agreements, shattering norms and undermining longstanding alliances.

Mr. Biden has vowed to turn the page on the “aberration” of Mr. Trump’s foreign policy. Some Trump-induced changes will easily be reversed, but many will be challenging to unwind, and some are likely to be indelible. Mr. Trump, who has already undermined the international order and isolated the United States, now appears determined to use his final 10 weeks in office to pursue a scorched-earth foreign policy that will only make Mr. Biden’s job harder and leave the world even less stable on Jan. 20.

A few words in Mr. Biden’s inaugural speech about his commitment to multilateralism, diplomacy and human rights would set the right tone. On Nov. 4, the Trump administration officially withdrew the United States from the Paris climate agreement, but Mr. Biden can easily rejoin it on his first day in office, as he has vowed to do. He can prevent our withdrawal from the World Health Organization, which doesn’t take effect until July 2021. The new president can also restore President Barack Obama’s Cuba policy, reaffirm the United States’ commitment to NATO, and replace Mr. Trump’s partisan and often unqualified appointees.

But there is only so much low-hanging fruit, not least because the Trump administration has been working relentlessly to make many of these policies as difficult to reverse as possible.

Take Iran, where Mr. Biden has made clear his intent to rejoin the 2015 nuclear deal so long as Tehran returns to full compliance. The deal’s revival is precisely what the Trump administration has sought to prevent. It has worked resolutely to build a so-called sanctions wall that would deter businesses from trading with Iran even if the United States rejoined the deal, repackaging nuclear-related sanctions as terrorism-related penalties to make it politically costlier for a Democratic administration to remove them. More broadly, the Trump administration seemed to be trying to erode any Iranian faith that an arrangement entered into with the United States would survive America’s political vicissitudes.

A similar logic has been at play on the Israeli-Palestinian conflict. President Trump’s proposed peace plan was dead on arrival, drafted without input from the Palestinians and unveiled without any expectation that they would accept it. A workable peace initiative wasn’t Mr. Trump’s objective; his proposal was designed to fundamentally and sustainably alter the starting point of any future peace talks. Imagine a future Israeli negotiator being asked to endorse more traditional terms for a two-state solution, knowing what was once on offer — including the right to annex some 30 percent of the West Bank — and might well be again.

Mr. Trump also shifted the terms of the China debate. He has equated his unilateral tariffs with toughness on China and suggested anything less would be surrender — politically complicating Mr. Biden’s task of ending a trade war that has done far more harm than good to American farmers, consumers and taxpayers.

And if a Biden administration were to seek to revisit provisions of the agreement reached with the Taliban, by extending the timetable for a full withdrawal of American troops from Afghanistan, tightening its conditionality or insisting on maintaining a small counterterrorism force, it would have to contend with an Afghan rebel movement that had already been offered a more generous deal and that has grown stronger and less persuaded than ever of America’s staying power. The Taliban won’t be likely to sit idly by if it sees its core demand slip away, even temporarily.

There are steps a Biden administration could take to overcome some of these hurdles. If Iran agrees to resume compliance with the nuclear deal, Mr. Biden should be able to rejoin it and repeal the sanctions imposed by the Trump administration, noting that those sanctions were put in place with the political objective of preventing a U.S. return to the deal. Any sanctions on legitimate targets related to terrorism or regional interference could be reimposed.

Mr. Biden could employ a similar approach to Mr. Trump’s China trade tariffs. Rather than taking Mr. Trump’s costly and unilateral approach to the trade war as a given, Mr. Biden could initiate a comprehensive review of all tariffs that would include close consultation with American allies on the best way to deal with China. It would result in both better relations with those allies and more leverage to wrest meaningful concessions from Beijing.

On Israel, Mr. Biden could state early on that the Trump plan is no longer U.S. policy and restore American assistance to and dialogue with Palestinians, reiterate longstanding — and internationally accepted — views on a viable two-state solution and make plain that his administration would oppose an outcome in which Palestinians were denied equal rights.

Even after taking these steps, Mr. Biden could still find that some of the damage his predecessor has inflicted is irreversible, because the Trump saga has projected an image of the United States as being demanding of others and unsure of itself, bullying and yet unreliable. The result has been to embolden China, distress Europe and leave all American allies and foes wondering about the durability of our commitments and the credibility of our threats.

Mr. Biden will also have to contend with the fact that the Obama to Trump to Biden cycle will have underscored the head-spinning, yo-yo quality of American politics in which the positions of one president can be wholly erased and defaced by those of another. Most of America’s partners will see in Mr. Biden’s radical correction of Mr. Trump’s approach evidence that any change, even one they welcome, could be ephemeral.

Mr. Trump will remain in office until Jan. 20. His refusal to concede, the abrupt replacement of his secretary of defense (with more high-level firings most likely on their way) and the announcement of new arms sales in the Middle East as well as a “flood” of additional Iran sanctions all suggest he will use his last days in the White House to try to make it harder for Mr. Biden to reverse course.

Mr. Trump, the lame duck commander in chief, could conceivably pursue withdrawing all American forces from Afghanistan, accelerating troop reductions in Germany, pushing through additional arms deals or issuing a travel ban on all members of the Chinese Communist Party. He could recognize Israeli sovereignty over West Bank settlements or designate groups such as Yemen’s Houthi movement or Egypt’s Muslim Brotherhood as terrorist organizations.

Even bolder and more damaging, he could overtly or covertly strike Iran’s nuclear facilities — or greenlight others to do so — on the theory that he alone can prevent a President Biden from allowing Iran to resume its nuclear march. The diplomatic malpractice, in other words, is not necessarily over yet.

Not everything Mr. Trump did will need to be jettisoned. His engagement with the North Korean leader was badly handled, and his negotiations with the Taliban left much to be desired. But in both cases he usefully shattered taboos that had inhibited American diplomacy. His escalation of the confrontation with Iran was dangerous, but his overall aversion to overseas military entanglements was healthy.

Amid the wreckage that has been his foreign policy, these are slim pickings. Mr. Biden has the opportunity to put Mr. Trump’s legacy behind him, but he may not be able to repair all the damage. The job of trying to do so cannot begin too soon.

Robert Malley is the president and chief executive of the International Crisis Group. Philip H. Gordon is a senior fellow at the Council on Foreign Relations and the author of “Losing the Long Game: The False Promise of Regime Change in the Middle East.” They served in the Obama administration and as informal advisers to the Biden-Harris campaign.

The chief of Hamas in Gaza tests positive, and other updates from around the world.

With Court Prize in Sight, Republicans Unite Behind Trump Once Again

A Turning Point for Hong Kong

Who Is Behind Those N.B.A. ‘Bubble Life’ Tweets?

The chief of Hamas in Gaza tests positive, and other updates...