ANCHORAGE — The crew of the Bristol Leader was laying out its long cod-catching line well within U.S. fishing territory in the Bering Sea when a voice crackled over the VHF radio and began issuing commands: The ship was in danger, it said, and needed to move.

The warnings, coming in a mixture of Russian and accented English from a plane buzzing overhead, grew more specific and more urgent. There was a submarine nearby, the voice said. Missiles were being fired. Leave the area.

Other U.S. fishing vessels that were scattered over 100 miles of open sea were getting similar messages. Capt. Steve Elliott stood dumbfounded on the trawler Vesteraalen as three Russian warships came barreling through, barking orders of their own. On the ship Blue North, commands from a Russian plane led Capt. David Anderson to contact the U.S. Coast Guard, wondering how to protect his crew of 27.

“It was frightening, to say the least,” Captain Anderson said. “The Coast Guard’s response was: Just do what they say.”

The Russian military operations in August inside the U.S. economic zone off the coast of Alaska were the latest in a series of escalated encounters across the North Pacific and the Arctic, where the retreat of polar ice continues to draw new commercial and military traffic. This year, the Russian military has driven a new nuclear-powered icebreaker straight to the North Pole, dropped paratroopers into a high-Arctic archipelago to perform a mock battle and repeatedly flown bombers to the edge of U.S. airspace.

As seas warmed by climate change open new opportunities for oil exploration and trade routes, the U.S. Coast Guard now finds itself monitoring a range of new activity: cruise ships promising a voyage through waters few have ever seen, research vessels trying to understand the changing landscape, tankers carrying new gas riches, and shipping vessels testing new passageways that sailors of centuries past could only dream of.

Russia’s operations in the Arctic have meant a growing military presence at America’s northern door. Rear Adm. Matthew T. Bell Jr., the commander of the Coast Guard district that oversees Alaska, said it was not a surprise to see Russian forces operating in the Bering Sea over the summer, but “the surprise was how aggressive they got on our side of the maritime boundary line.”

In the air, U.S. jets in Alaska typically scramble to intercept about a half-dozen approaching Russian aircraft a year, outliers on the long-range nuclear bomber patrols that Russia resumed in 2007. But this year that number has risen to 14 — on pace to set a record since the Cold War era. In the most recent case, last month, the United States responded to the approach of two Russian bombers and two Russian fighters that came within 30 nautical miles of Alaskan shores.

Russians have refurbished and restored dozens of military posts in the Arctic region, including on Wrangel Island, some 300 miles from the coast of Alaska, and have laid plans for controlling emerging navigation routes that would bring traffic through the Bering Strait, where Alaska and Russia are separated by only 55 miles of water.

This summer, Russia’s military operated in the Bering Sea, home to America’s largest fishery, where boats haul up pots crawling with red king crab, and trawlers dump nets filled with 200 tons of pollock onto their decks. The area is the U.S. pathway to the Arctic waters where extraction companies have worked for years to capture the billions of dollars of oil and gas resources trapped under the sea floor.

U.S. territorial waters extend 12 nautical miles from the nation’s shores, but commercial vessels operate even farther within the U.S. Exclusive Economic Zone, a territory stretching some 200 miles offshore in which the country can harvest fish or natural resources without foreign competition but cannot prohibit the passage of international vessels.

Tim Thomas, a U.S. captain on the fishing vessel Northern Jaeger, encountered this summer’s Russian exercises on Aug. 26 when his ship was operating more than 20 nautical miles inside the U.S. economic zone. After a Russian plane directed Captain Thomas to take his boat out of the area, he said, he responded that he was within the U.S. zone, not on the Russian side, and that the Russians could not order them to leave.

At that point, he said, a Russian military ship joined in and issued similar orders.

“At this point, I’m going, ‘What’s going on here? Are we getting invaded?’” Captain Thomas said in an interview.

Captain Thomas said he contacted the Coast Guard, but the officers there, he said, seemed to be unaware of the Russian operations. They told him he was responsible for the safety of his crew. But he was reluctant to leave: They were finding some of the best fishing of the season, and the Russians had ordered him not to return to those productive grounds for nine days. 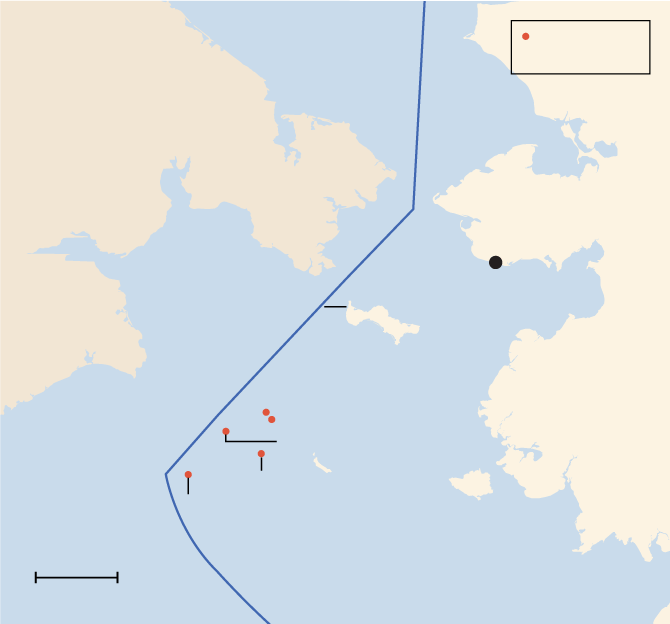 The Russians, who were running a military exercise known as Ocean Shield that involved some 50 warships and 40 aircraft operating throughout the Bering Sea, were adamant, and their warnings grew more intense. U.S. officials have since said that a Russian submarine launched a cruise missile from the Bering Sea that day.

As he considered the safety of the 130 people on his boat, Captain Thomas ultimately decided to leave. He estimates the forced departure cost his company more than $1 million in revenue.

Senator Dan Sullivan of Alaska, a Republican, who has pressed for years for a stronger U.S. presence in the Arctic and has warned about increasing Russian activity there, said the fishing boats should not have been forced to leave U.S. fishing territory. He said he was surprised by the scale of Russia’s recent aggressive actions in the Bering Sea, noting that during the same exercise in August, fighter planes from the North American Aerospace Defense Command, or NORAD, scrambled to respond to three groups of Russian aircraft that approached Alaska.

“I think they were testing us — flexing their military muscle,” the senator said.

Coast Guard officials said Russia had notified the U.S. government that part of its exercise would include a portion of the fishing zone. But federal officials did not alert commercial fishing operators to the planned exercise.

Coast Guard officials said they have been working to make sure future notifications reached the right people. They have also said that U.S. fishing vessels were not required to follow any orders from a foreign entity to depart American fishing grounds. But in a memo last month to those involved in the North Pacific fishing industry that outlined what had transpired in the Bering Sea, the Coast Guard also cautioned that “safety of life at sea should always be paramount in managing the safe navigation of any vessel on the high seas, and is the responsibility of the mariner with firsthand situational awareness.”

As Russia has ramped up its presence in the region, U.S. officials have accelerated their own efforts. The Coast Guard has long complained that its lone pair of aging icebreakers are struggling to stay in service but may now have the opportunity to build six new ones. (Russia has dozens.) The United States is also discussing a northern deepwater port, perhaps around Nome. Currently, the nearest strategic port is 1,300 nautical miles away in Anchorage.

Alaska already draws a relatively large portion of U.S. military spending, with bases serving the Air Force and the Army in or around both Anchorage and Fairbanks.

Jets in Alaska scrambled repeatedly this year to intercept Russian aircraft moving toward U.S. airspace. But jets taking off from inland bases can take more than 90 minutes to reach the coast of Alaska, said Maj. Gen. Scott Clancy, a Canadian officer who is the director of operations at NORAD.

General Clancy said the encounters were professional. In the encounter last month, the four Russian aircraft loitered in the area for about 90 minutes and never crossed into U.S. airspace. But General Clancy said it was clear the Russians were both testing the capabilities of NORAD and demonstrating their own, increasing the frequency and also the complexity of their approaches.

“This adversary — this competitor, Russia — has advanced on all fronts,” he said. “We find ourselves in another era of great-power competition. Russia obviously wants to be a competitor in that.”

Lt. Gen. David Krumm, commander of the multi-force Alaskan Command and also the 11th Air Force, said that while the Arctic used to provide a natural buffer between the nations of the Far North, the new possibility of ice-free passage has changed that.

“We’re at a pivotal point in the timeline of the Arctic,” he said at a recent convention of the Alaska Federation of Natives, many of whose members reside in remote villages scattered throughout the northern region.

General Krumm said the United States would need to invest in operations, equipment and training to prepare for the changing environment. Alaska, he said, has historically been viewed as a base from which to project American power elsewhere in the world, but the mission is changing.

“What we have to do now is be prepared to fight here and defend here,” he said.