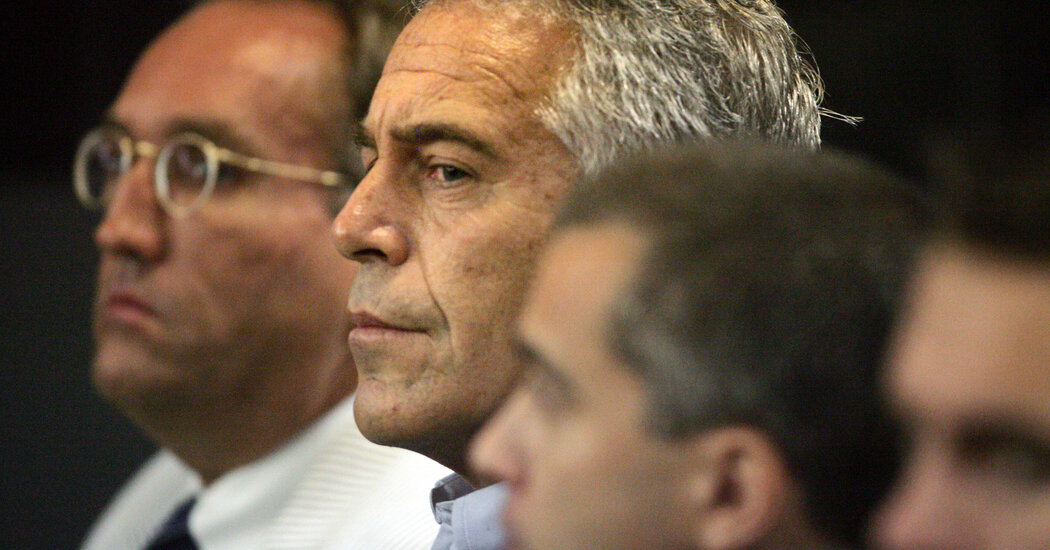 A former top federal prosecutor in Miami “exercised poor judgment” by allowing the disgraced financier Jeffrey Epstein to evade federal child trafficking charges more than a decade ago, a Justice Department review revealed on Thursday, but it found no other wrongdoing, prompting criticism that the department dodged responsibility for its light treatment of Mr. Epstein, who died last year of an apparent suicide after his arrest on similar charges.

The department’s Office of Professional Responsibility did not find any professional misconduct by R. Alexander Acosta, the U.S. attorney in Miami who oversaw the 2006 investigation into Mr. Epstein and who later served as labor secretary under President Trump until he resigned last year amid a renewed uproar over the Epstein case.

The review was an attempt to close the door on an embarrassing episode for the Justice Department that critics have said allowed Mr. Epstein to largely go unscrutinized in the face of years of allegations that he sexually abused dozens of teenage girls. It also permitted him to continue to socialize with politicians, celebrities, academics and Wall Street billionaires and reinvent himself as a philanthropist and tax and estate adviser to the ultrarich.

The decision by Mr. Acosta to pursue a nonprosecution agreement rather than federal charges “was a flawed mechanism for satisfying the federal interest that caused the government to open its investigation of Epstein,” according to a 13-page executive summary of the report. Mr. Acosta, the summary said, erred in giving too much deference to the interests of Florida prosecutors and “his view of the federal interest in prosecuting Epstein was too narrow.”

The nonprosecution agreement was part of a deal that culminated with Mr. Epstein pleading guilty in Florida to a single state charge of soliciting prostitution from a minor girl and registering as a sex offender. The terms of the federal agreement, which also safeguarded four named alleged co-conspirators from prosecution, were largely kept hidden for years from his victims.

The review had followed public outrage prompted by an investigative series in The Miami Herald that examined the events leading up to the nonprosecution agreement and the relatively light sentence Mr. Epstein received from state prosecutors in Florida as a part of the deal. A month after the Herald series, Senator Ben Sasse of Nebraska, who is chairman of the subcommittee with oversight of the federal judiciary, demanded a Justice Department investigation of Mr. Acosta’s handling of the matter.

Mr. Sasse said the review’s finding were inadequate. “The D.O.J.’s crooked deal with Epstein effectively shut down investigations into his child sex-trafficking ring and protected his co-conspirators in other states,” he said in a statement.

Mr. Acosta defended his 2007 decision making during a news conference soon after Mr. Epstein’s arrest in July 2019. But his explanation did not quell the furor, and two days after that news conference he resigned as labor secretary.

The full 350-page report goes into great detail about the behind-the-scenes negotiations that led to the nonprosecution agreement. It also seeks to rebut certain urban myths that have developed around Mr. Epstein, including whether he had received a light deal because he cooperated in an investigation involving a criminal case involving two former Bear Stearns hedge fund managers or was an “intelligence asset.” The report said it “found no evidence suggesting that Epstein was such a cooperating witness or ‘intelligence asset.’”

In a two-page statement issued by his lawyer, Gordon Todd, Mr. Acosta said the review largely vindicated him and “debunks allegations” that he and his office had “improperly cut Epstein a ‘sweetheart deal’ or purposefully avoided investigating potential wrongdoing by various prominent individuals.”

Mr. Acosta also said in the statement, “The Epstein affair as understood today is vastly more lurid and sweeping than was known” and involves allegations against a number of prominent people as well as Mr. Epstein.

Before releasing the executive summary, Justice Department lawyers met in Miami with lawyers for some of the victims to discuss their findings. The government lawyers said full copies of the report would be provided to any member of Congress who asked for them.

Sigrid McCawley, a lawyer with Boies Schiller Flexner who represents several victims, called the review an “anemic accounting of what really happened.” Spencer Kuvin, who represents some of the first accusers who complained to federal and state authorities about Mr. Epstein, said he was glad “the U.S. government is recognizing its own failures regarding its handling of this matter.”

The furor over the handling of allegations of sexual abuse by Mr. Epstein led federal prosecutors in Manhattan to take a fresh look into the matter. The new investigation led to Mr. Epstein’s arrest on sex-trafficking charges in July 2019.

But his death a month later prompted another round of public outcry, particularly from victims who would never be able to face him in a federal courtroom. Attorney General William P. Barr immediately announced internal investigations to determine how Mr. Epstein had died and said that the Manhattan federal prosecutor’s office would continue to build a human trafficking case against some of Mr. Epstein’s associates.

Coroner’s reports and an investigation by the F.B.I. and the Justice Department’s inspector general ultimately ruled Mr. Epstein’s death a suicide, Mr. Barr said last fall, adding that he personally reviewed security camera footage of Mr. Epstein’s housing area that showed that no one had entered it on the night of his death.

The F.B.I. and inspector general investigations led to criminal indictments against two prison guards who were charged with conspiracy to defraud the United States and with making false records. While the guards have pleaded not guilty, the cases against them laid out the official narrative of the negligence that the government said allowed Mr. Epstein the privacy and isolation that he needed to commit suicide.

The Bureau of Prisons has also completed an investigation into the circumstances surrounding Mr. Epstein’s death, but it is not expected to be made public.

This summer, the U.S. attorney’s office in Manhattan arrested Ghislaine Maxwell, the daughter of a publishing magnate and a onetime confidant of Mr. Epstein, on charges that she lured underage girls and groomed them to be abused by Mr. Epstein.

Gas Tax Spikes in N.J. Because of Pandemic’s Impact