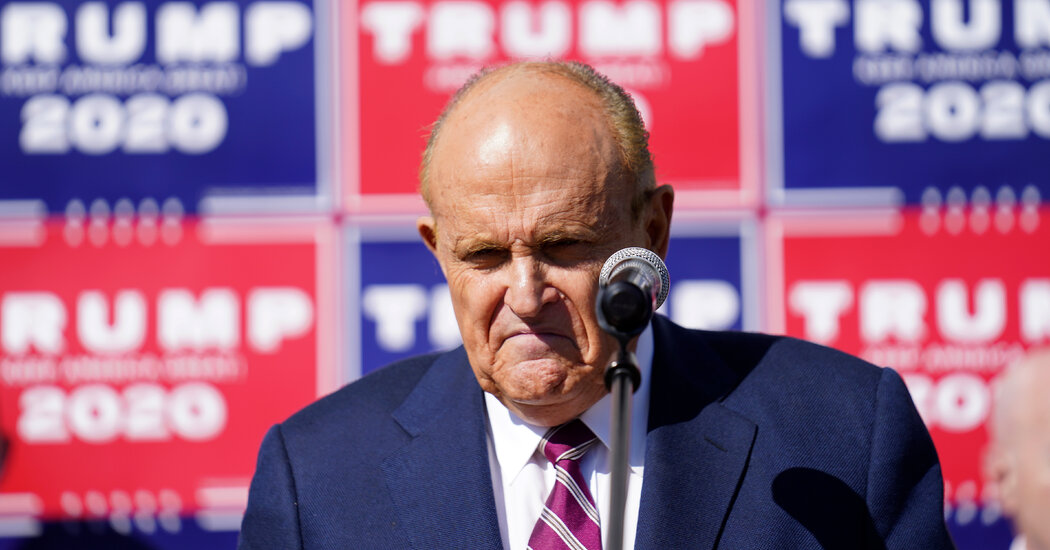 We’ve been through a lot these last few days, people. Decades from now, some of you are going to have to answer your grandchildren when they ask you about the Time of the Two Presidents.

Donald Trump’s resistance to the idea that he lost the election isn’t a surprise. This is a man, former star of a phony-reality TV show, who almost never admits he’s lost/failed/come in second at anything. Who knows what new adventures we’ll have before Inauguration Day? I’m hoping he’ll refuse to leave his room and security agents will end up carrying him out of the White House in a blanket.

Which blanket would then be shredded into little bitty tufts of cloth and sold to benefit Trump’s Official Election Defense Fund. Or perhaps its successor, the Make Mar-a-Lago Great Again Crusade.

Meanwhile, if you had to pick one seminal moment in the Trump resistance, it really ought to be Rudy Giuliani’s press conference announcing the president would not concede. So many reasons this gets top billing. Not the least was that Giuliani’s prime witness, introduced to back up claims of voter fraud, turned out to be a convicted sex offender.

Like many of the witnesses Trump’s team was mobilizing, Daryl Brooks seemed to have a vague mission in election oversight — he said he “wanted to go to the polls to watch.” There were definitely a lot of Republicans who, like Brooks, felt they hadn’t been allowed to get close enough to the action and suspected something was being hidden.

But experts searching high and low failed to find any evidence of the kind of serious, widespread irregularities that might call the results into question. Instead, the public got … Giuliani. Who held his press conference at a place called Four Seasons Total Landscaping in Philadelphia. This seemed to give Trump the pleasant impression the event was in the swank Four Seasons Hotel, instead of a humble gardening service store near a crematory and a sex shop.

Rudy emphasized that Brooks was just the first of what were going to be “many, many witnesses” of election fraud. Inquiring minds wanted to know why, in that case, he chose to lead off with a guy who served jail time for exposing himself to two girls, owed a great deal of money in overdue child support payments and, if known at all in his home state, New Jersey, it is as one of those guys who keeps running for offices he’s never going to win in a million years.

The whole Trump resistance has a nutty flavor. The family is sending out emails assuring supporters that victory is around the corner, just so long as a check is in the mail. “We’ve found ballots in drainage ditches,” warned Eric Trump, who reminded his readers that the Official Election Defense Fund was open for donations.

We’re just two weeks from Thanksgiving and I know you all have a lot of priorities. Tell me which you would rather invest your money in:

A. Charities that give food for the poor.

B. Outdoor heaters so you can, maybe, have a safe little party for friends and family.

We may be going into a very weird and freaky holiday season. The current leader of The Most Powerful Nation on the Globe is refusing to acknowledge, let alone offer any help, to President-elect Joe Biden. Instead, Trump was busy pushing out top officials in the Defense Department. Hey — do you remember all the times you talked over the last year about what would happen if Trump lost and refused to go away? Everybody agreed that the military would never allow that kind of coup d’état, right? The guys from … the Defense Department.

No reason to get panicky here. But the way Trump’s minions are standing behind his rebellion is pretty disgusting. The head of the General Services Administration isn’t working with the incoming Biden folk, leaving them unable — among many, many other things — to process financial disclosure and conflict-of-interest forms for their nominees.

Secretary of State Mike Pompeo, given the chance to encourage his staff to help Biden, predicted “there will be a smooth transition to a second Trump administration.”

Secretary Pompeo, do you really think this is a good plan? We know you want to hang onto the Trump supporters in case you run for the Senate — or, what the hell, go off and become a pathologically wealthy lobbyist/consultant. But really, do you want to be known as the guy who out-Rudied Rudy?

And Attorney General Bill Barr is just encouraging his boss’s monomania, calling for his own Justice Department to investigate “substantial allegations” of voter fraud. The official in charge of such investigations quit in response.

Hey, we’ve got a real competition underway here. Who’s the most irresponsible member of the Trump orbit? Besides, obviously, Himself.

Send me your pick in the comments below. Winners to be announced before the turkey and stuffing are ready.

Witnesses to the Ravages of Fire, and Desperate to Avoid a Sequel

Ottessa Moshfegh’s Latest Is a Murder Mystery, but Where’s the Body?