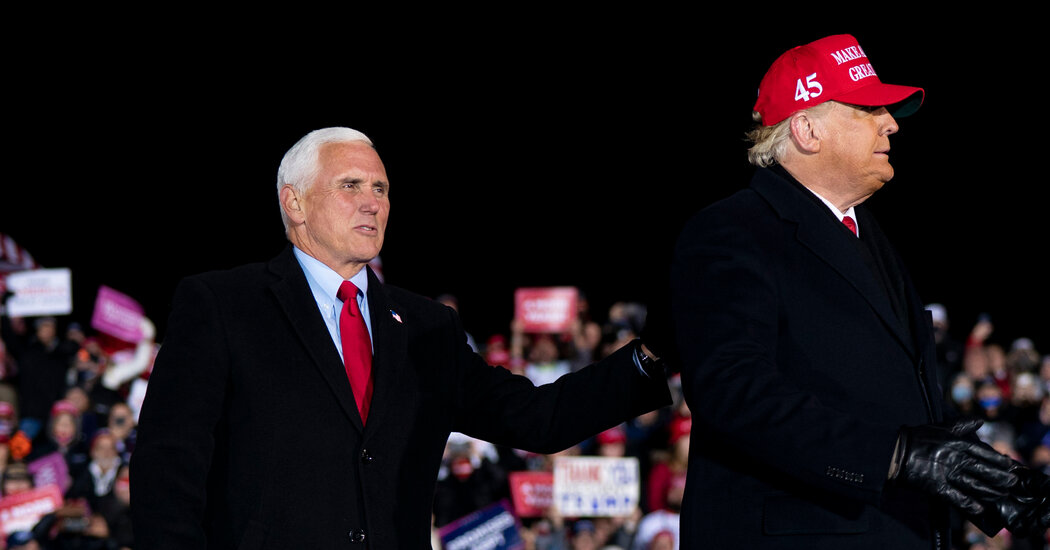 WASHINGTON — For four years, Vice President Mike Pence has walked the Trump tightrope more successfully than anyone else in the president’s orbit, staying on his good side without having to echo his most incendiary language.

But in the final weeks of Mr. Pence’s term, his relationship with President Trump faces what may be its toughest challenge yet.

Mr. Pence must now balance his loyalty to an enraged president making baseless claims of voter fraud against his own political future and reputation. He also has to deal with how Mr. Trump’s talk of running for president again in 2024 could leave him with no lane to run in. It would be difficult for Mr. Pence to even start raising money if the president is floating his own name.

So far, Mr. Pence appears to be handling the pressure much as he has over the past four years: appearing to be unflinchingly loyal while also steering clear of engaging in Mr. Trump’s pressure campaigns.

In the last few months of Mr. Pence’s vice presidency, his advisers want him focused on leading the coronavirus task force and helping the two Georgia Republicans facing runoffs that will determine whether the party maintains its Senate majority.

Those advisers said they would prefer that the vice president steer clear of the Trump campaign’s legal fights over the election, and so far, Mr. Pence has been careful not to repeat Mr. Trump’s most baseless attacks on the electoral system.

In his brief remarks last week after election night — he kept them to 53 seconds — Mr. Pence tried to make what amounted to a non-endorsement of the president’s claim that the election was a “major fraud on our nation” into something that sounded like unquestioning support.

“As the votes continue to be counted, we’re going to remain vigilant, as the president said,” Mr. Pence said at the White House. “We’re going to protect the integrity of the vote.”

For almost a week afterward, Mr. Pence was not seen or heard in public, though it was reported that he spent time with Mr. Trump in the Oval Office on Friday. The president is scheduled to have lunch with him on Thursday.

Will you not give COVID-19 vaccine to those who don’t vote for you: Shiv...

Nick Saban Is Being Tested for the Virus. The Runaway Train of College Football...

Iran sets new death and infection records, and other news from around the world.

‘Feeling Like Death’: Inside a Houston Hospital Bracing for a Virus Peak