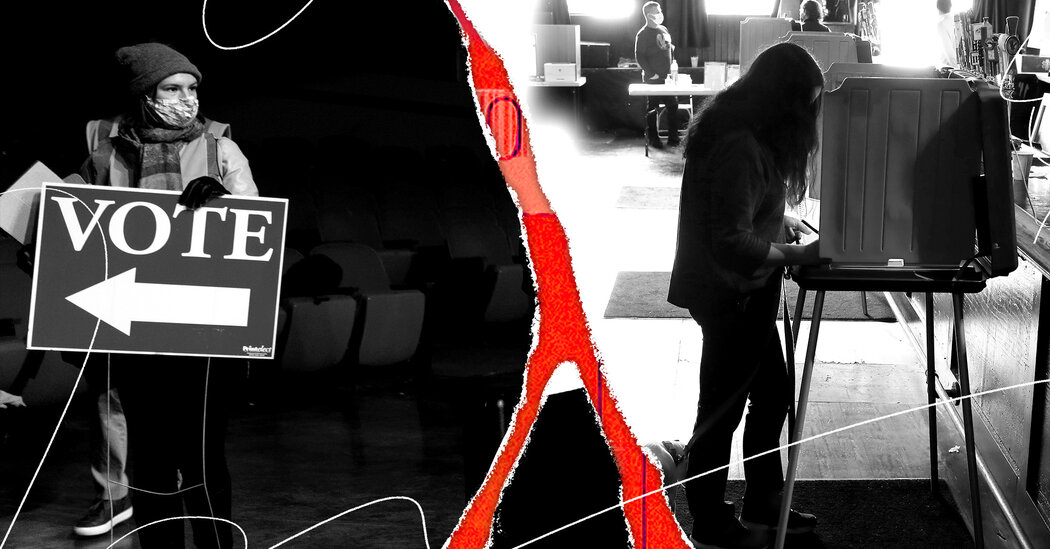 The 2020 presidential election always promised to be a “historic” one, and there’s no question it delivered: More than 66 percent of the voting-eligible population cast a ballot, according to projections from The Washington Post, the highest level of voter turnout since 1900.

As with the 2016 election, the consensus around what this mass expression of popular will says about the country is likely to be debated for years to come, but here are some lessons that journalists, data analysts and politicians are already taking away.

Support for Trump has become stronger, not weaker

The Democratic Party’s goal for this election was a wholesale repudiation of President Trump and his style of politics. But as the Times columnist Jamelle Bouie noted, that repudiation never came. In fact, the president expanded his base in 2020, earning nearly 10 million more votes than he did in 2016 and over six million more than Hillary Clinton.

“Even without policy to match the populist persona — the Trump administration has been as generous to the wealthy and connected as it has been stingy with the poor and the working class — Trumpism appeals to tens of millions of voters, from the large majority of white Americans to many people in traditionally Democratic constituencies,” Mr. Bouie writes. “That, if anything, is the surprise of this election.”

In a political climate as polarized as ours, much of Mr. Trump’s gains can be chalked up to pure “negative partisanship.” But for people without strong party affiliations, Mr. Trump’s handling of the economy, which voters consistently rank as their top issue, may have played a role: Approval ratings of Mr. Trump’s economic performance remained high throughout his presidency, which coincided with the country’s longest economic expansion. And in September, a majority of Americans told Gallup they were better off than they were four years ago, which was not the case in 2012 and 2004.

Of course, Mr. Trump also presided over the sharpest downturn since the Great Depression. But as Annie Lowrey explains in The Atlantic, many Americans seemed not to blame Mr. Trump for the pandemic-induced recession, and the election occurred as the economy was already bouncing back. Because of the trillions in stimulus Congress passed in March, many in the middle class are actually faring better financially than they were before. (Those most devastated by the recession were likely to vote Democratic anyway.)

Racial and ethnic polarization seems to be decreasing

White voters, who made up roughly two-thirds of the electorate, continue to be the only racial group from which Mr. Trump commanded majority support. Exit polls — which, it bears reminding, are preliminary estimates — show that his advantage increased slightly among white women from 2016, but he lost support among white men both with and without college degrees.

At the same time, President-elect Joe Biden underperformed Hillary Clinton among other racial and ethnic groups. Mr. Trump expanded his appeal among Black voters, for example, though Black support for Democrats remained so high that the increase in turnout cost Mr. Trump dearly in states such as Michigan and Georgia.

Most significant were Mr. Trump’s inroads with Latino voters in the battleground states of Florida and Texas, which helped keep them in Republican hands. In Texas, especially, Mr. Trump’s handling of the economy, combined with the lack of Democratic messaging and outreach, appeared key to his success.

But the losses in Latino support Mr. Biden suffered in those states were offset by gains made in others, in part because of grass-roots organizing that preceded this election cycle. In Arizona, for example, the nativist tenure of Joe Arpaio, the former Maricopa County sheriff, galvanized the children of immigrants a decade ago to build political power, which contributed to Mr. Biden’s and Senator-elect Mark Kelly’s victories there.

[Related: “Democrats Underperformed Among Voters of Color — Except in Arizona. Here’s Why.”]

If the diversity of the so-called Latino vote has befuddled the political class, it’s because “it doesn’t exist, nor do ‘Latino issues,’” my colleague Isvett Verde writes. “Latinos, like all Americans, are motivated by the issues that affect them directly. Those can vary depending on factors like our religion, where we grew up, whether we are first generation or our ancestors lived in North America long before the United States existed.”

What’s true for Latinos is also true for Asian-Americans, whose support for Democrats is traditionally strong, but appeared weaker this year, and has never been uniform. About half of Vietnamese-Americans support Mr. Trump, for example, compared with one-fifth of Chinese-Americans, according to one survey.

To Jay Caspian Kang, a writer at large for The New York Times Magazine, the lesson for both parties, and especially Democrats, is to start treating voters who belong to extremely broad racial and ethnic groups less like electoral tokens and more like political agents whose interests are contingent on their class position, education, ideology, immigration status, specific cultural background, age and location.

As he said on the podcast “Time to Say Goodbye”: “You have to stop insulting people by believing that, you know, just by saying ‘We’re less racist’ that they’re going to vote for you.”

The suburbs are trending blue

In 2018, voters in increasingly diverse and highly educated suburbs helped flip the House blue. That support only increased in 2020: On average, Mr. Biden improved on Hillary Clinton’s performance in suburban counties around the country by about 4.6 percentage points, The Times reports, which was crucial to Mr. Biden’s win.

The implications of the shift, Neal Rothschild and Stef W. Kight write at Axios, are clear: “The suburbs are growing and racially and ethnically diverse. They’re becoming new immigrant hubs. The trends could benefit Democrats for the long-term unless Republicans change their playbook.”

The red-blue economic divide is widening

According to exit polls, Mr. Biden did better than Mr. Trump with voters whose family income falls below $100,000 per year. But relatively well-off metro areas also show a stark partisan divide: Regions with higher education levels, fewer manufacturing jobs and brighter long-term economic prospects swung more toward Mr. Biden, while regions with lower job growth and a larger share of jobs at risk of automation swung more toward Mr. Trump.

“Despite some demographic realignments, the economies of red and blue places drifted further apart,” Jed Kelko writes in The Times. “And as these gaps widen, it gets ever more challenging for America to have a shared view of the state of the economy and of the policies most urgently needed.”

Support for progressive policies was all over the map

As Emily Peck reports for HuffPost, voters supported a number of progressive policies last week — and not only in the places one might expect:

At the same time, progressive priorities suffered major setbacks, and in Democratic strongholds, no less. In Illinois, voters rejected a measure to raise taxes on the rich, the same sort of policy that enjoys broad support nationally. And in California, voters passed Prop 22, a ballot measure that overturned legislation that forced companies like Uber and DoorDash to treat their contract workers as employees with guaranteed wages and benefits.

“Prop 22 is great for employers, but it’s a huge loss for workers,” Robert Reich, a University of California, Berkeley, professor of public policy and former U.S. secretary of labor, told The Times. “This will encourage other companies to reclassify their work force as independent contractors, and once they do, over a century of labor protections vanishes overnight.”

If there is any electoral lesson to decode from these results, it’s not clear that ideology offers the right interpretive key. “At a time when great masses of voters support obvious contradictions like raising the minimum wage and viciously anti-worker state legislatures,” writes Alex Pareene in The New Republic, “it’s hard to believe anyone, at least in the short term, has a compelling or even plausible strategy for consistently winning elections.”

MORE ON THE VOTE BREAKDOWN

“White people, yet again, showed up for Donald Trump” [Vox]

“This Election, a Divided America Stands United on One Topic” [The New York Times]

Facebook Adds Labels for Some Posts as Advertisers Pull Back

After 6 Murder Trials and 24 Years, Charges Dropped Against Curtis Flowers

Cherries Belong in More Than Pie