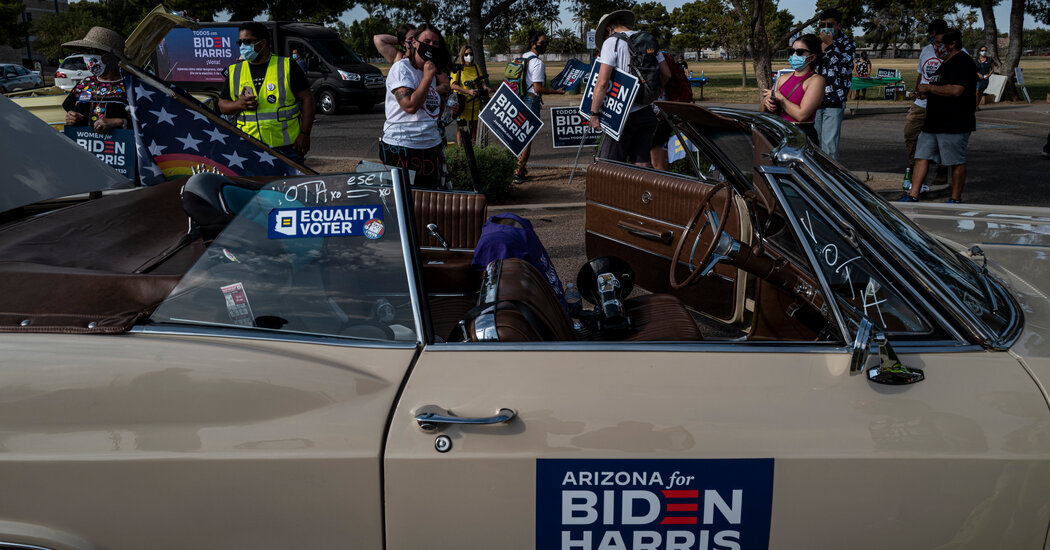 Mr. Biden, whose margin in Arizona is currently about 11,000 votes, or 0.3 percentage points, is the first Democratic presidential candidate to carry the state since President Bill Clinton in 1996. Four years ago, Mr. Trump won the state by 3.5 percentage points.

That Arizona — the home of the late Senator John McCain and Senator Barry Goldwater, a founder of the 20th century conservative political movement and the 1964 Republican presidential nominee — was in play for Democrats at all is remarkable. Before the state voted for Mr. Clinton, the last Democrat it had supported for president was Harry S. Truman in 1948.

Last week, the Democratic challenger Mark Kelly defeated the state’s Republican senator, Martha McSally, in a special election, making Mr. Kelly and Senator Kyrsten Sinema the first pair of Democrats to represent Arizona in the Senate since the 1950s.

The Arizona victory brings Mr. Biden to 290 electoral votes, 20 more than the 270 required to take the White House.

Republicans have been mounting long-shot legal attempts to try to upend results in key battleground states, but they have mostly been dealt setbacks — and some of their cases deal with small numbers of ballots.

For instance, Mr. Trump would have to invalidate roughly 55,000 Pennsylvania votes to overturn Mr. Biden’s victory there. The office of Pennsylvania’s attorney general, Josh Shapiro, has said that there is no evidence to support claims from Mr. Trump’s lawyers that the election in Philadelphia or elsewhere in Pennsylvania was fraudulent.

The Trump campaign has filed a lawsuit in Arizona, alleging that poll workers in the state’s largest county, Maricopa, improperly pressured voters to enter their vote in a way that would incorrectly reject votes.

On Wednesday, Arizona’s attorney general, Mark Brnovich, a Republican, told Fox News that state officials had received about 1,000 complaints about the election but had found “no evidence” of widespread voter fraud.

“If indeed there was some great conspiracy, it apparently didn’t work,” he said.

Single Parenting in a Pandemic

Video of the honors at the Capitol for Justice Ruth Bader Ginsburg.

A Biden campaign video shows how small Trump’s $750 tax bill is, compared with...