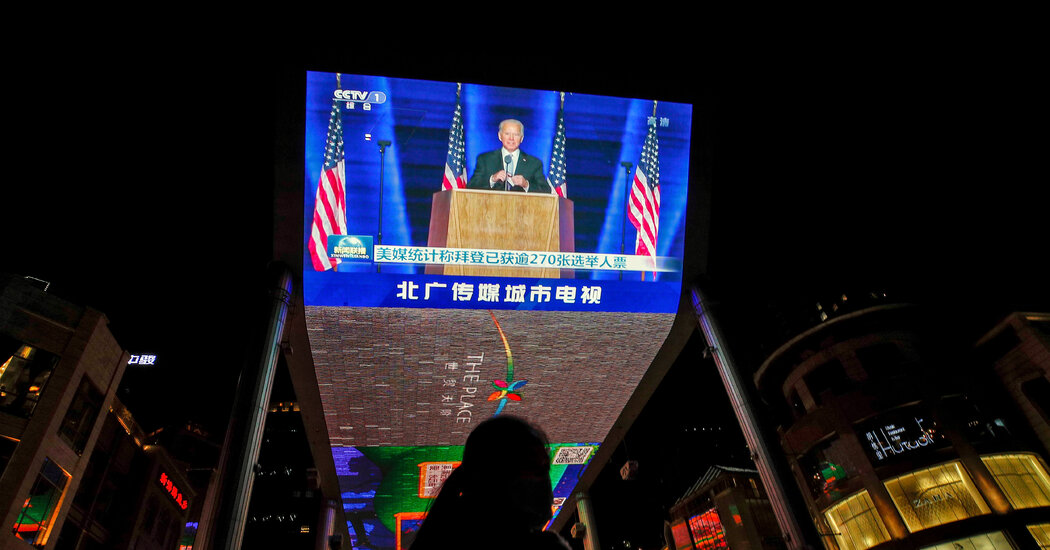 After days of silence, China on Friday congratulated Joseph R. Biden Jr. on his election as president of the United States, signaling a start to its relations with the incoming administration after years of hostility and distrust under President Trump.

“We express our congratulations to Mr. Biden and Ms. Harris,” Wang Wenbin, a spokesman for China’s Ministry of Foreign Affairs, said at a daily news conference, referring to Vice President-elect Kamala Harris. “We respect the choice of the American people.”

China is the latest foreign country to acknowledge Mr. Biden’s victory in the past week. Several authoritarians who enjoyed mostly amicable relations under Mr. Trump have remained quiet, including President Vladimir V. Putin of Russia and President Jair Bolsonaro of Brazil.

China’s Foreign Ministry had previously sidestepped the question of when it might comment publicly on Mr. Biden’s victory, saying it would respect American laws and procedures for determining the winner of the election — a line that Mr. Wang repeated on Friday after conveying China’s congratulations.

For China, relations with the United States have deteriorated to their lowest point in decades during the Trump administration, which has taken confrontational stances on trade, technology, human rights and a host of other issues.

While the tone from American officials may become less strident under Mr. Biden, few expect him to reverse Mr. Trump’s policies on China right away.

Mr. Biden’s views on China have hardened since he was vice president under President Barack Obama. On the campaign trail, Mr. Biden called the country’s top leader, Xi Jinping, “a thug,” and he has said that China’s rise represents the “greatest strategic challenge” to the United States and its allies.

Visitors to antifa.com are redirected to Biden’s website. His campaign is not happy.

Under Coronavirus Lockdown, a Philippine Priest Hits the Streets

Police Chiefs Are Finding Job Security Is Hard to Come By