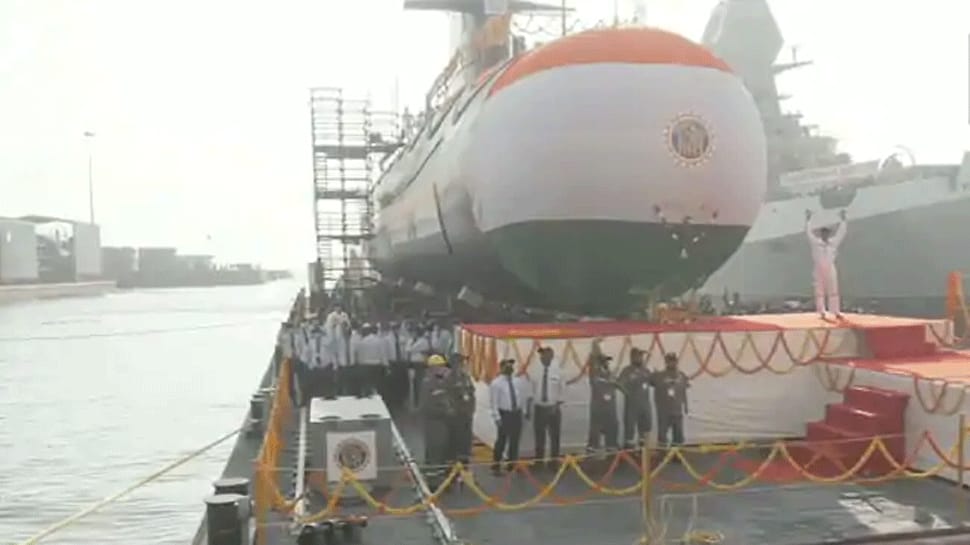 New Delhi: Close on the heels of a dozen high-profile missile launches which included an anti-ship missile and a hypersonic missile, India launched the INS Vagir-its 5th Scorpene Class submarine in Mumbai today.

INS Vagir, launched by Minister of State for Defence Shripad Y. Naik, is part of the six Kalvari-class submarines being built under Indian Navy`s Project-75. The INS Vagir can undertake missions like anti-surface warfare, anti-submarine warfare, intelligence gathering, mine laying and area surveillance. It has been designed by a French naval defence and energy company.

India has already commissioned two submarines under Project-75 while two others are currently undergoing sea trials.

This year has been extraordinary for both-Indian foreign policy as well as the defence forces. On the one hand, China launched an attack on Indian territory in Ladakh at multiple points; on the other, India has swiftly moved to build strategic and defence alliances with other liberal democracies.

Submarine INS Vagir has been launched in the middle of the significant Malabar maritime exercise which India is conducting with the Quad navies-Australia, Japan and the US. Of these, Australia joined the Malabar exercise for the first time this year.

An immediate and strategic reason for the induction of Australia into the Malabar exercise was to strengthen this four-nation alliance in the Indo-Pacific region. India, along with a number of other countries from across continents, has been watching Chinese expansionism and aggression with concern. This extends to not just countries with land borders but also that share waters with China in the East China and South China Seas, where the communist giant has been extending itself into the exclusive economic zones of countries like Vietnam, Malaysia, Brunei and others.

In a press release early November, the Indian Navy had said that the Malabar exercise will be held in two phases, of which, “Phase 1 would witness complex and advanced naval exercises including surface, anti-submarine and anti-air warfare operations, cross deck flying, seamanship evolutions and weapon firing exercises.” The Phase 1 exercise was held in the Bay of Bengal, away from the Visakhapatnam coast, and concluded on November 6.

The four navies will perform complex and advanced exercises including surface, anti-submarine and anti-air warfare operations, cross deck flying, seamanship evolutions and weapon firing exercises. The Phase 2 of the Malabar maritime exercise is yet to begin. This part will be held in the Arabian Sea-on the western coast of India in the next few days.

With France helping India in the design of the submarine, Indo-French military ties have taken a significant step forward this year, particularly after the delivery of Rafale jets this year.

French Defence Minister Florence Parly had spoken about this special defence relationship while delivering the fighters at the Ambala Air Force station. Significantly, she had also highlighted her country`s support for the Make in India initiative in defence production. Parly added that French defence companies have begun to integrate themselves in India to be able to boost global supply chains-something which India had been pushing for since Prime Minister Narendra Modi assumed power in 2014.

The supply of Rafale to India has generated extraordinary bonhomie between the two nations. Speaking at the same event, Defence Minister Rajnath Singh said that the induction of these jets sends a big message to the entire globe, particularly those eyeing India`s sovereignty. Pointing to China indirectly, Singh added that this induction is important because of the atmosphere that has been created on Indian borders.

Amid a heightened war atmosphere with Chinese military aggression on the Ladakh border and a constant flow of war-cries from the communist controlled media, India has warmly welcomed the Rafale fighters. The Indian Air Force has already put the planes to use as they carry out regular sorties close to the border with China. The state-of-the-art fighters are supposed to tilt the balance in favor of India against both China and Pakistan.

French Ambassador Emmanuel Lenain told news agency ANI recently that the, “planes are outstanding, Indian technicians and pilots marvellously completed their training in France. They are totally capable to use these planes at their best.”

India has also made efforts to improve its military ties with Myanmar where the latter is pushing China over the exploitative China-Myanmar Economic Corridor. With China reaching out to all of India`s neighbors, including Myanmar, with economic goodies and even military equipment, India too joined the race to spread its influence.

This October, the Myanmar Navy showcased its first submarine UMS Minye Theinkhathu-a vital gift from India. The diesel-electric submarine, INS Sindhuvir was retrofitted and upgraded before being given to the Myanmar Navy. Significantly, Indian Army chief M.M. Naravane and Foreign Secretary Harsh Shringla also visited the eastern neighbour to strengthen the bilateral relationship.

‘A True Disappointment’: How It Feels When Your First Pride Parade Is Canceled