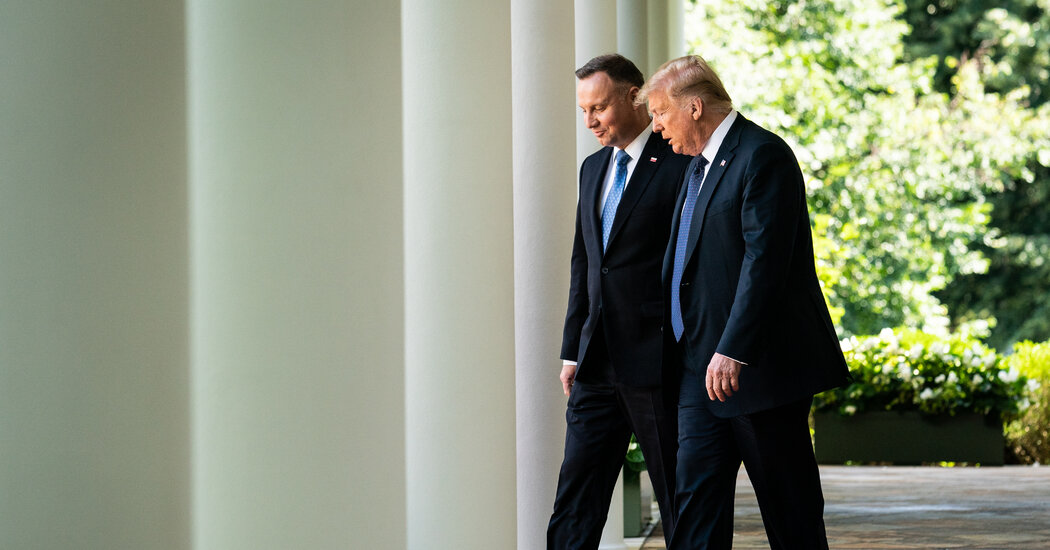 VIENNA — Donald Trump’s victory in the 2016 presidential election was experienced by many right-wing populists in Europe as a momentous turning point. It was their version of 1989, when the fall of the Berlin Wall made liberalism appear unstoppable and triumphant. Right-wing populists from Hungary to Britain believed that if Mr. Trump could become president of the United States, the future belonged to them. President Trump’s 2020 defeat may trigger the rise of a much darker vision.

Fortified by the solidarity of a majority of Republicans, including, it seems, the secretary of state, Mr. Trump has wantonly rejected the outcome of the recent vote. Invoking allegations of fraud, he has made it clear that for him, conceding defeat is a non-starter. This behavior might seem pathetic — and it’s not going to keep him in office — but his decision to ignore the will of the people has ramifications for democracy well beyond the United States.

While most presidents and prime ministers seem ready to congratulate President-elect Joe Biden, a handful of political leaders — Mr. Trump’s allies — are endorsing his defiant gambit. When the media announced Mr. Biden’s triumph last Saturday, right-wing broadcasters across Europe insisted that the elections were not over. While Emmanuel Macron of France and Angela Merkel of Germany seemed more than pleased to usher in a new administration, Prime Minister Viktor Orban of Hungary and President Andrzej Duda of Poland were in no rush to congratulate the president-elect.

In fact, at the same time Mr. Trump was calling foul, Mr. Orban was proposing changes to the Hungarian electoral system that should help him to stay in power beyond 2022 and threatened to veto the European Union budget if Berlin and Brussels demanded that rule of law violations lead to the suspension of European funds. By doing it he had made it clear that the outcome of the American elections will not change his policies and that, like Mr. Trump, his choice is defiance. He is ready to block the much needed European Recovery Fund in order to demonstrate that he will not compromise with Brussels.

Democratic politics serves as a nationwide therapy session. It allows voters to express their fears about the future while at the same time reassuring them that when the elections are over, everything will go back to normal. It is hardly surprising then that politicians and the news media depict most elections as turning points — choices that will define the fate of the nation for the next generation. But when the elections are over, democracy forces the losers to focus on the next election, which will without fail be the most important election once again.

By refusing to concede, Mr. Trump sends a message to his allies that for right-wing populists, the next election is of no importance. If they concede today, there will be no victories tomorrow. If in 2016 Mr. Trump’s message was that the future belongs to the nationalist populists; today, by refusing to concede, his defeat he sent the message that populists should fear the future.

In trying to make sense of Mr. Trump’s defiance, most analysts have looked at the president’s personality: Donald Trump never concedes defeat and this entire act of defiance is a way to soothe his ego.

But the reasons his supporters both inside and outside the United States stand by him run much deeper. They reflect the apocalyptic mind-set of the right-wing populist voters in the West.

First, it is crucial to understand that the stakes feel alarmingly high at the moment. People have been haunted for months by mass death; the global economy has been severely disrupted. This is a toxic climate for politics already, encouraging end-times thinking. The failure of Mr. Trump to contain the pandemic further fans the flames.

But the right wing has other reasons to fear the future: A generational divide fuels its deep pessimism. The good majority of Americans voters younger than 25 cast their ballots against Mr. Trump. Similar trends look likely in Europe, where the right-wing’s base is dominated by the aging population. That has only been intensified by the fear of the inflow of migrants who will get the right to vote.

Nobody has articulated the fear of being outvoted as a result of demographic change better than Mr. Trump. During the 2016 presidential campaign, he told his supporters “I think this will be the last election that the Republicans have a chance of winning, because you’re going to have people flowing across the border, you’re going to have illegal immigrants coming in, and they’re going to be legalized … and be able to vote. Once all that happens you can forget it.” All European populists have echoed Trump’s demographic anxiety.

Can the European experience help America to deal with the reality of contested elections? Unfortunately not.

Consider this: In the 30 years since the end of Communism, Albanians have voted nine times in parliamentary elections. In only three instances has the losing party conceded defeat. In most cases it was the opposition party that rejected the election results and asked its supporters to take to the streets. Usually, it took the American Embassy in Tirana, Albania’s capital, to force the loser to accept reality. In the current American emergency an “Albanian solution” will not work because there is no American Embassy in Washington. Americans must resolve this crisis on their own. And the way they resolve it will determine the future of democracy around the world.

New York’s Reopened Museums: Where to Go and What to See

Will President Trump Get Antibody Treatments for Covid-19?