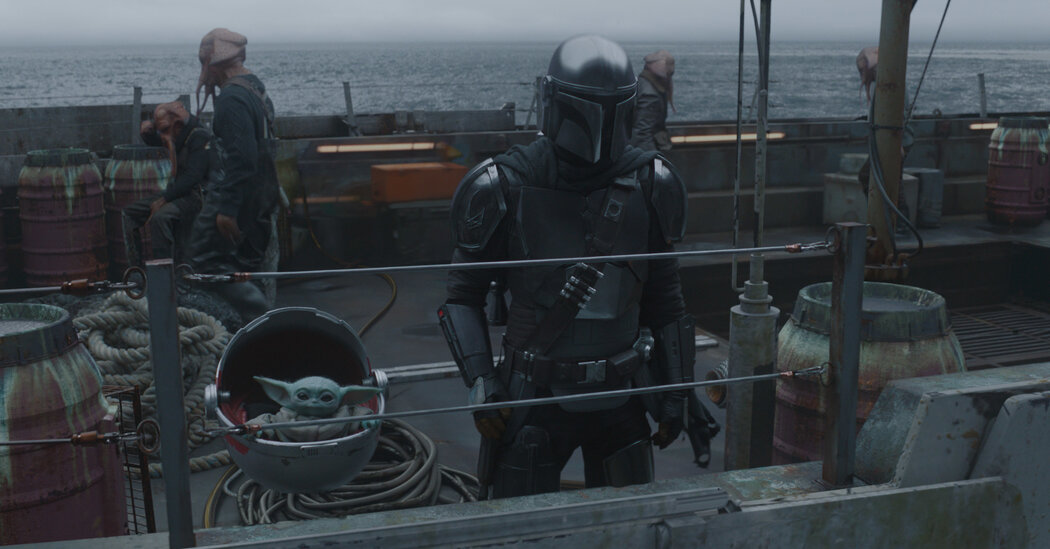 Last week on “The Mandalorian,” Baby Yoda scarfed down several unfertilized frog-creature eggs, sparking arguments across the internet about whether the kid’s uncontrollable impulse to have a little snack was funny or appalling. Well, this week Baby Yoda — sealed inside his own floating metallic “egg” — gets swallowed whole by a sea monster. Could this be some kind of poetic justice?

I don’t want to dive too deep into the ethics or the entertainment value of the Child’s egg-eating in last week’s chapter of “The Mandalorian.” In my review, I called it “hilarious.” I stand by that — although I do understand why some people might find the joke too shocking to enjoy.

But it is worth noting that the “Star Wars” universe is filled with species that eat other species. In “The Mandalorian” Season 2 premiere, a Krayt dragon consumed several Tusken Raiders — as well as Mando himself — before getting blown to smithereens and having its own meat distributed among the throng. In this week’s episode, “The Heiress,” our heroes stop at a pub on the watery moon of Trask, where the proprietor serves a chowder (dispensed by what can only be called a soup hose) containing living seafood with flailing tentacles. At one point, one of those beasts leaps out of the bowl and tries to chomp the Child. Later in the episode, the Child slurps down a different one of those squirmy things. So it goes.

As we’ve been moving further into the larger story of “The Mandalorian,” it’s becoming clear that the series’s creator and head writer, Jon Favreau, means to explore the moral gray areas of “Star Wars” by setting his saga at a time when the galaxy’s order is very much in flux. It’s hard to discern sometimes who the good guys are in this era. Who’s the predator and who’s the prey?

As a case-in-point, consider the new allies the Mandalorian makes this week. After the Child gets gobbled by the leviathan, Din Djarin dives into the water to save him. Just when he’s about to be killed by a gang of squid-headed Quarren — intending, like so many others, to steal his armor — he’s saved by three of his fellow Mandalorians.

But there’s a complication. The posse members immediately remove their helmets after the rescue, ignoring what our Mando believes are ancient, inviolable protocols. Moreover, the squad’s leader, Bo-Katan Kryze (Katee Sackhoff), then explains that while she was fighting in the battles to liberate Mandalore, Din’s order, “the Watch,” was arguing against social progress and pushing to reestablish the orthodox religious practices of “the Way.” Is it possible that all this time, our Mando has been the wrong kind of Mandalorian?

Hearing there might be more than one Mandalorian Way rattles Din, who rockets off with the Child … only to encounter yet another mob of angry Quarren, necessitating yet another Bo-Katan rescue. Finally, Mando agrees to join forces with her as she and her team attempt to reclaim some stolen Mandalorian weapons from an Imperial freighter, guarded by Stormtroopers.

Fervent “Star Wars” fans who’ve watched every movie and TV series — and have maybe also read every novel and comic book and played every video game — should recognize some of the back story and mythology described in this episode. Bo-Katan Kryze herself is a character in the animated series “Star Wars: The Clone Wars” and “Star Wars Rebels.” (In both, she is voiced by Sackhoff). Her quest to acquire the powerful and symbolic weapon the Darksaber — and then to lead her people to independence — is a big part of the franchise’s lore.

But it’s not necessary to know any of that to enjoy “The Heiress,” which is just as tied to the already established “Mandalorian” plot. The Darksaber, as you may recall, is currently in the hands of last season’s main villain, Moff Gideon (Giancarlo Esposito), who is still using it for his own nefarious purposes in the parts of the galaxy where the Empire still has some sway. Gideon appears briefly in this episode via hologram, advising the Imperial freighter’s captain (played by the always terrific Titus Welliver) to do whatever he must to keep the Mandalorian raiders from seizing their weapons cache.

What follows is another outstanding “Mandalorian” action sequence as Din and Bo-Katan’s team fight off the captain’s crew in narrow corridors — the “Star Wars” set designers do love their narrow corridors — and then try to keep the captain from crashing the freighter, killing them all. In addition to being gripping, the big climactic set-piece is filled with what makes this franchise fun, including lots of moments when the reliably dim Stormtroopers don’t really understand what’s going on.

The breathless rush of that final battle is also representative of where our Mandalorian finds himself at this point in the story. He’s always been a very task-oriented bounty hunter, taking one job after another while trying his best to represent the ideals of his order. But while he has been hustling to keep the Child safe, he has also been working alongside whoever can help. Droids, Jedi, rival Mandalorians … Din Djarin has been learning to trust some folks he might previously have considered his enemies. Sometimes ideals have to bend to circumstance.

When Mando lands on Trask’s moon at the start of the episode, his craft, the Razor Crest, is sputtering badly, with metal flaking off the hull. When he leaves at the end, the ship has been literally bound together by ropes and wires by the Mon Calamari mechanics he hired. (When Din complains about the staff’s shoddy work, the supervisor just quietly hands him an invoice to sign. That’s another fine bit of “Mandalorian” silent comedy.)

As the Mandalorian and the Child rocket into hyperspace, more Razor Crest chunks go flying. That’s because the state of the ship is similar to the state of the galaxy. Everyone is just trying to keep what they have in one piece, however possible, for as long as necessary. Survival first. Moral quandaries later.

This Is the Way:

All Eyes on Bars as Virus Surges and Americans Go Drinking

Why Things Are Different This Time

Is Amy Coney Barrett Joining a Supreme Court Built for the Wealthy?