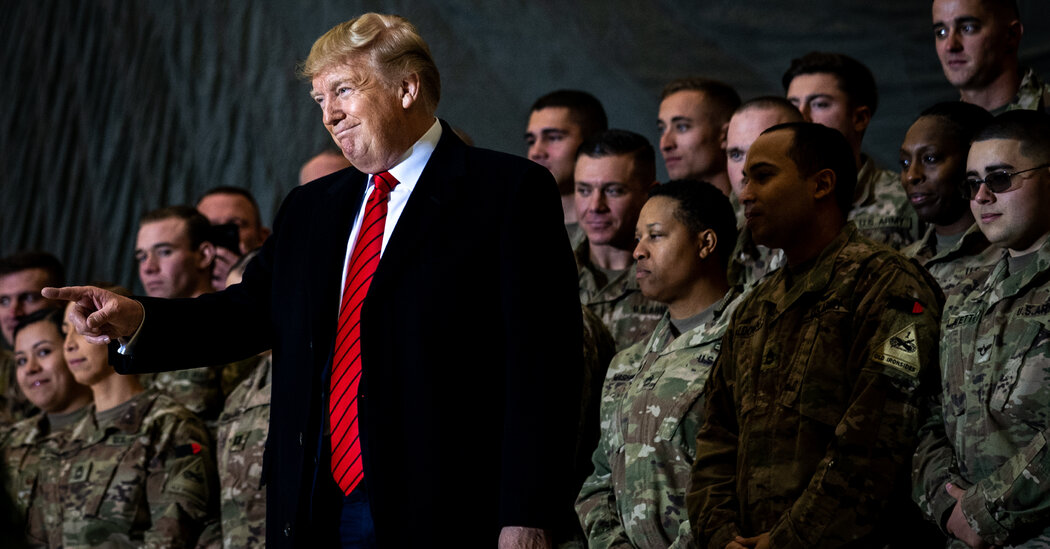 WASHINGTON — Consistent is not the adjective many would use to describe President Trump’s national security policy. But there is one goal he has nurtured since the 2016 campaign: withdrawing all American troops from Afghanistan.

Now, in the waning days of his presidency, Mr. Trump is scrambling to make it so, aided by conservative antiwar forces who see it not only as good policy but also as a linchpin to any future he may seek in politics.

This week, Mr. Trump dismissed his defense secretary, Mark T. Esper, who had repeatedly expressed reluctance for a fast pullout from Afghanistan, replacing him with Christopher C. Miller, the former director of the National Counterterrorism Center, who may lack the stature and experience to push back effectively on Mr. Trump’s 11th-hour foreign policy actions.

Notably, Douglas Macgregor, a retired Army colonel and fierce proponent of ending American involvement in Afghanistan, was named this week as a senior adviser to Mr. Miller.

Mr. Trump recently nominated a new ambassador to Afghanistan, William Ruger, the vice president for research and policy at the Charles Koch Institute — a vocal and well-financed opponent of current conflicts abroad. Even before any Senate confirmation, which seems unlikely before Inauguration Day, Mr. Ruger maintains a large chair at Mr. Trump’s foreign policy table.

“The president has had difficulty finding personnel who would faithfully execute on his preferences,” Mr. Ruger said in an interview on Friday. With the new Pentagon leadership, “the president could really cement a legacy here,” he said, adding that Mr. Trump “could be the leader who ends America’s longest war.”

This week, the American commander in Afghanistan, Gen. Austin S. Miller, traveled to Washington on a previously scheduled trip as officials in both countries braced for a possible announcement as early as next week to quickly reduce the 4,500 United States troops still left in Afghanistan. Mr. Trump has said previously that he wants to pull all troops from Afghanistan by Christmas.

With his recent flurry of firings and appointments, Mr. Trump has effectively pulled down a majority of the personnel guardrails against a fast withdrawal.

Mr. Trump’s views on reducing the United States’ footprint overseas are long standing and a central component of his “America First” foreign policy agenda. After originally supporting the war in Iraq, he spent years criticizing President George W. Bush for America’s wars in the region. During his 2016 campaign, Mr. Trump astonished fellow Republicans by directly attacking Mr. Bush about the war in Iraq and suggesting he failed to prevent the Sept. 11, 2001, attacks.

But what many Republicans failed to grasp is that Mr. Trump’s positions on the so-called endless wars were good politics. Rancor toward those conflicts has grown among many conservatives, including those in the Koch circle, as well as libertarians among congressional Republicans and even those on the left, including Senator Bernie Sanders, independent of Vermont, among others.

Last year, VoteVets, the liberal political action committee, and the conservative Concerned Veterans for America teamed up to persuade Congress to revoke authorizations of military force passed after Sept. 11. Mr. Trump also replaced the hawkish John R. Bolton with Robert C. O’Brien as his national security adviser. Mr. O’Brien has said the United States needs to redirect its resources from Afghanistan and toward the competition and possible conflicts with China and Russia.

Polls have shown that a majority of veterans have grown disenchanted with the conflicts in Afghanistan and Iraq, which helped Mr. Trump earn strong support among veterans who voted in 2016. Many have been disappointed that troops remain deployed in Afghanistan and that other promises to reduce the military presence in other regions have not been fulfilled.

Exit polls this month suggest that Mr. Trump won veterans 54 percent to 44 percent; in 2016, the poll found he won veterans 60 percent to 34 percent, a major shift that could stem from a variety of factors including his mixed record on these issues.

President-elect Joseph R. Biden Jr. will find himself having to address these political dynamics at home and the realities on the ground as progress toward peace between the Taliban and the Afghan government stalls.

Critics of a fast withdrawal before the Taliban meet the conditions of a recent peace agreement fear that any attempt to pull all American troops by year’s end would potentially result in deaths on the ground. Citing recent escalating violence across the county, they worry that the Taliban could succeed at seizing more territory, especially in the south, the group’s historic center of power.

Critics of an accelerated withdrawal point to logistical challenges of the strategy. Several current and former Pentagon officials have noted that a withdrawal within two months — which seems to be Mr. Trump’s goal — would be challenging, given the amount of military equipment that would have to be shipped out to avoid becoming spoils for the Taliban.

“Those in the Pentagon will use the logistics argument to slow this down,” said Dan Caldwell, a senior adviser to Concerned Veterans for America, a group that has strongly influenced veterans’ policies under Mr. Trump. “People there have slow-walked this and tried to box the president in and that likely upset the president and did not endear Secretary Esper to him.”

Over the last year, the organization has spent over $3 million on advertisements in support of an Afghanistan withdrawal. Conservative news media personalities, including Tucker Carlson, have also advocated the drawdown. If Mr. Trump actually announces an expedited plan, “we are going to go big,” Mr. Caldwell said.

Of course with Mr. Trump, strongly expressed intentions concerning troops often do not come to fruition.

After announcing a full troop withdrawal from Syria in late 2018 — and abandoning Kurdish allies, for which he was widely criticized — he opted to leave several hundred troops in Syria.

He has also told aides he wanted to greatly reduce the 700 American troops in Somalia — most of them Special Operations forces — and so far that has gone nowhere.

“Regardless of who the president is, we will support good policies,” he said. “Getting out of Afghanistan is good policy.”

May there be joy, prosperity all over: PM Narendra Modi greets people on Ganesh...

A Poem of Gratitude From Minnesota

One of the Most Perilous Jobs in Government