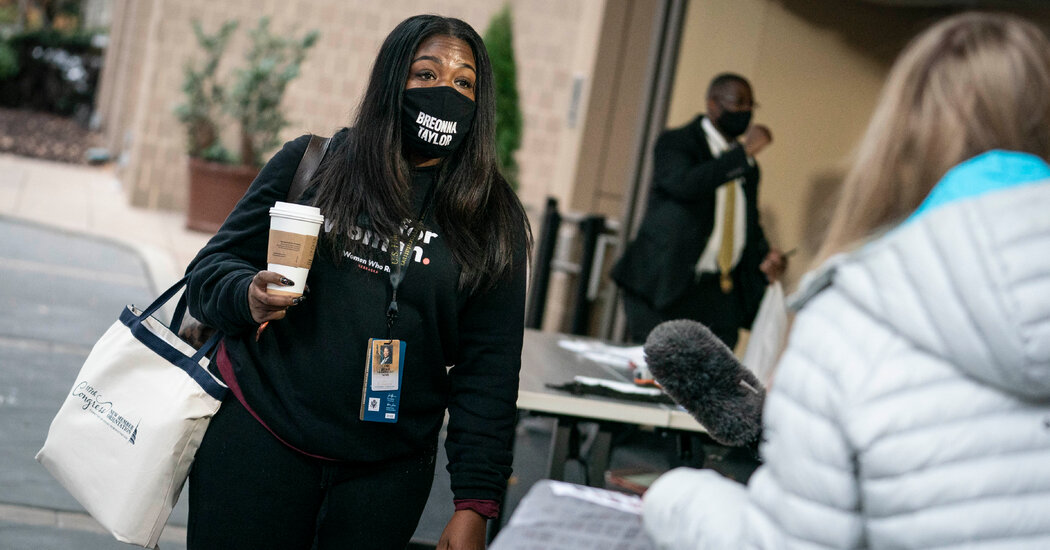 Representatives-elect Cori Bush, a progressive Democrat wearing a Breonna Taylor face mask, and Marjorie Taylor Greene, a QAnon-promoting Republican whose entourage sported MAGA gear, arrived at freshman orientation in Washington within minutes of each other on Thursday, offering vastly different visions for their parties and for a new Congress.

The freshman class of the 117th Congress — featuring a surge of conservative women who stunned centrist Democrats at the polls last week, but also an ascendant left that ousted establishment Democrats in primaries — is undergoing an unusual pandemic-era orientation process on Capitol Hill.

Despite their deep ideological differences, many of the first-year lawmakers said they were hoping to collaborate.

“We’re going have to be able to work together,” Ms. Bush said. “We have districts that have needs that are similar. Hopefully, they’re willing to listen to me. I’m willing to listen to them. I’m already seeing Make America Great Again hats, but I have on my Breonna Taylor. So we’re going to talk and hopefully this 117th, it will show the diversity.”

By Friday, Ms. Bush took to Twitter that say that some of her Republican colleagues apparently were unfamiliar with Ms. Taylor, who was killed by the police in Kentucky in a case that drew international attention and sparked massive protests.

“It’s Day One, so I’m wearing my ‘Breonna Taylor’ mask,” she wrote. “A few of my Republican colleagues have called me Breonna, assuming that’s my name. It hurts. But I’m glad they’ll come to know her name & story because of my presence here. Breonna must be central to our work in Congress.”

For her part, Ms. Greene, who was seen briefly removing her American flag mask upon checking in at orientation and declined to talk to reporters, ridiculed her new colleagues on Friday for promoting the wearing of face coverings to stop the spread of the coronavirus.

“Our first session of New Member Orientation covered COVID in Congress,” she tweeted. “Masks, masks, masks …. I proudly told my freshman class that masks are oppressive. In GA, we work out, shop, go to restaurants, go to work, and school without masks. My body, my choice.”

She appended the hashtag “#FreeYourFace.”

The virus is surging in Georgia. Over the past two weeks, deaths are up 56 percent, hospitalizations are up 10 percent and new cases are up 26 percent. About 300 people died of the virus in Georgia in the past week.

On of the most striking features of the new class is the large number of Republican women. Of the 10 incumbent Democrats who lost their seats in last week’s election, eight were defeated by Republican women.

“It’s not just Democrat women that have the monopoly on breaking glass ceilings; Republican women have been doing it all their lives,” said Representative-elect Nancy Mace of South Carolina, who knocked off a centrist Democrat. Ms. Mace is the first woman to graduate from the Citadel and the first to represent her state in Congress.

“To see us double the number of Republican women in the House this year is pretty phenomenal. It doesn’t matter what your political affiliation is. If you want women to have a seat at the table, if you want to be in office, we have to run in order to win,” she said. “That’s what we did this year.”

With a U.N. Veto, Russia and China Add to Syria’s Misery

Safe to Go Out? Republicans and Democrats Widely Split