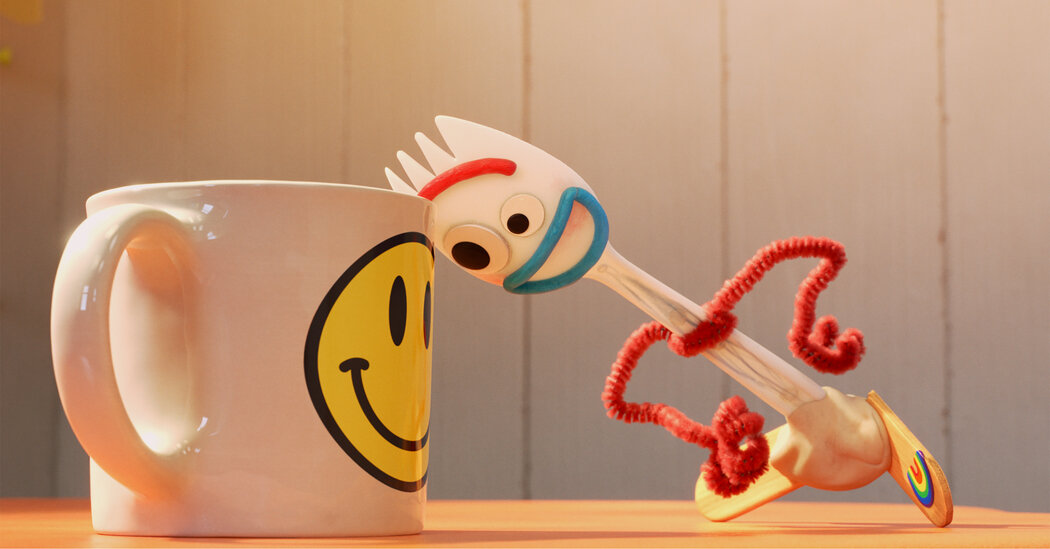 “What is a friend?” asks Forky (voiced by actor Tony Hale) on the Emmy Award-winning “Toy Story” spinoff, “Forky Asks a Question,” a philosophical show for toddlers. A plastic spork with pipe cleaners for arms and limited life experience, Forky doesn’t have much to go on. As Bonnie’s special toy, he has overheard Bonnie’s mom on the phone with a friend, coffee mug in hand, listening and occasionally interjecting, “What? Nooo.” Friendship is collaborative in some way, he seems to understand. Maybe friends dance with one another, he suggests to the inanimate coffee mug. (In one of many misunderstandings, Forky thinks the mug is named “What? No.”) Maybe friends like to spend time together not talking, he says. The mug offers nothing in response.

Forky is “brand new to the world and doesn’t quite know anything,” said Bob Peterson, the series’ writer, who co-directed “Up,” and co-wrote “Finding Nemo” and “Cars.” The idea behind “Forky Asks a Question” was to have Forky bring his partial understanding of life to a different topic each episode (“What is art?” “What is time?”). When Forky turns his mismatched googly eyes to one of the great questions of life — who are we to others? — he becomes a perfect stand-in for children trying to figure out that concept in a world gone wonky.

What is a friend to a young child? It’s something I’ve asked myself, particularly since the start of the pandemic. And how can children maintain important connections from a distance?

For a time, Covid-19 risk kept my children from school and play dates, and they toted the memories of their friendships behind them like sagging helium balloons, asking when they could have friends over again. Their first time back on a playground, they were ecstatic. My 3-year-old son cried out from the top of a slide, “Mom, look! I made a friend! She’s having a great time playing with me!” Aside from my 5-year-old daughter, the only other child in sight was an indifferent 1-year-old being helped up the stairs by her father. My son perceived her as a playmate, taking what seemed to me heartbreaking pride in his ability to “make” a friend at the playground. Had he forgotten what a real friendship is? Do toddlers even understand the concept?

“If you asked your child to basically tell you why someone is a friend, you would get something very concrete like, ‘It’s fun to play together,’ or ‘We live together,’ or ‘It’s nice to join him in the sandbox,’” explained Dr. Barry Schneider, professor emeritus at the School of Psychology, University of Ottawa, and senior lecturer in the Department of Psychology at Boston College. Toddlers are limited by how well they can verbalize their feelings, he explained, but developmental psychologists have observed children demonstrating deep cognitive awareness of friendship — choosing the same kid to play with, sharing secrets, feeling unhappy if that kid isn’t at day care care, responding to a friend’s emotional distress — from early childhood, as a study of 1-year-olds in Sweden published in the European Early Childhood Education Research Journal found.

Unlike Forky’s relationship with the mug, these relationships are reciprocal. “You can love someone who doesn’t love you, but strictly speaking you can’t have a friendship with someone who isn’t your friend,” said Dr. Schneider, who wrote “Childhood Friendships and Peer Relations: Friends and Enemies.”

The consensus is that children begin forming these reciprocal relationships in late toddlerhood or early preschool. It is harder to measure friendships in very young children but it’s reasonable to conjecture that mutual friendships could start very young “if babies spend lots of time in a nursery,” said Dr. Claire Hughes, professor of developmental psychology at the University of Cambridge and author of “Social Understanding, Social Lives: From Toddlerhood Through to the Transition to School,” in an email conversation.

Jerry Seinfeld has observed that childhood friendship seems to be instant: “If someone’s in front of my house NOW, that’s my friend,” went an old bit. “We have to go beyond a vocabulary test” to differentiate real friendships from momentary companions, said Dr. Schneider — toddlers use the term “friend” to mean both, but the former shows true endurance. A 1983 paper by Elaine S. Gershman and Donald S. Hayes — at the time psychology professors at the University of Maine — found that mutual reciprocal friendships among preschoolers who designated each other as “best friends” were more likely than those in which kids said they “liked” another child to be maintained over a six-month period, through disruptions such as changes in class assignments.

The psychologist Dr. John Gottman has reported in numerous studies that young children form intimate and supportive bonds with certain friends that are “far more sophisticated” than children are able to self-report in interviews with researchers. To study these friendships, he had parents tape-record playdates, transcribed the conversations and then coded the children’s interactions — a mix of gossip, joking, fantasy play, cooperation and so on.

A strong rapport allows Eric and Naomi, toddlers observed by Gottman and his co-author, psychologist Jeffrey Parker, in “Social and Emotional Development in a Relationship Context,” to begin a fantasy game in which they can explore and diffuse their fears and concerns. “A skeleton, everyone! A skeleton!” announces Eric, laying the grounds for a new game. “I’m your friend, the dinosaur,” responds his friend Naomi, who later reassures Eric that he is a “good skeleton” when he expresses self-doubt (“You know, no one likes me.”).

Toddlers with close bonds have been observed imitating each other in a kind of shared language, and we can infer from the excitement they show while playing with a friend “that their friendships constitute a valuable and rewarding experience,” said Dr. Schneider. “It is a connection of closeness and not just the convenience of having someone who’s fun to play with.”

If you ask a young child about that friendship, though, they might not understand what you want to know or be able to articulate their understanding, even though it underpins their behavior, Dr. Gottman noted. Friendships are, he wrote, “private worlds.”

“Chumships,” as the psychologist Harry Stack Sullivan called early same-age friendships, are the first relationships in which children learn to care about another person’s feelings and to recognize their own desire for intimacy. (The mother-child relationship provides a basis for intimacy, but responsibility is on the parent to understand and respond to the needs of the child.)

With age, children are better able to express the importance of their friends. They develop more peer relationships and begin to play in larger groups, but close friends remain much more important “because that is when you have strong, emotional support,” said Dr. Cheung Hoi Shan, an assistant professor of social sciences at Yale-NUS College in Singapore. Early friendships, along with attachment to parents, help children develop a blueprint for socialization, the knowledge that, “If I’m nice, this is how people respond, and if I’m hurt, this is how people would help me, and then I will help people back,” she said.

So what happens when those close early friendships are grounded?

My 3-year-old could tell me he missed his “best friend” since infancy through the long, quiet summer, though he forgot the names of the other kids at day care. We managed to get the two besties onto FaceTime once or twice, their faces blotting out parts of the screen in what can tenuously be described as a conversation, but I wondered if he would pick up the friendship where he left off.

After a hiatus of six months, the two were joyfully reunited in their new pre-K class, and now report that they are getting married.

The endurance of their bond is in line with the literature on the “half-life” of children’s friendships, said Dr. Schneider, who pointed to the longitudinal Swedish study of preschool-aged “best friends,” which has been replicated. These studies “refute the proverbial contention that preschool friendships change as frequently as the weather,” he said.

“Given the value of friendship for young children, I think it is good for preschoolers to remain in contact with their friends even by FaceTime or Skype,” he advised. Doing drive-by birthday greetings or arranging social bubbles would also allow children to tend to their friendships.

The pandemic has scattered our children’s playmates, but their friendships are more robust than you might expect. Take Forky, built of Popsicle sticks and putty. He might not be able to express exactly what a friend is, but it’s inscribed right there on his feet: BON / NIE.

A User’s Guide to Face Masks

‘Liberty Bell’ Tolls for Sites Where History Is Alive and Kicking