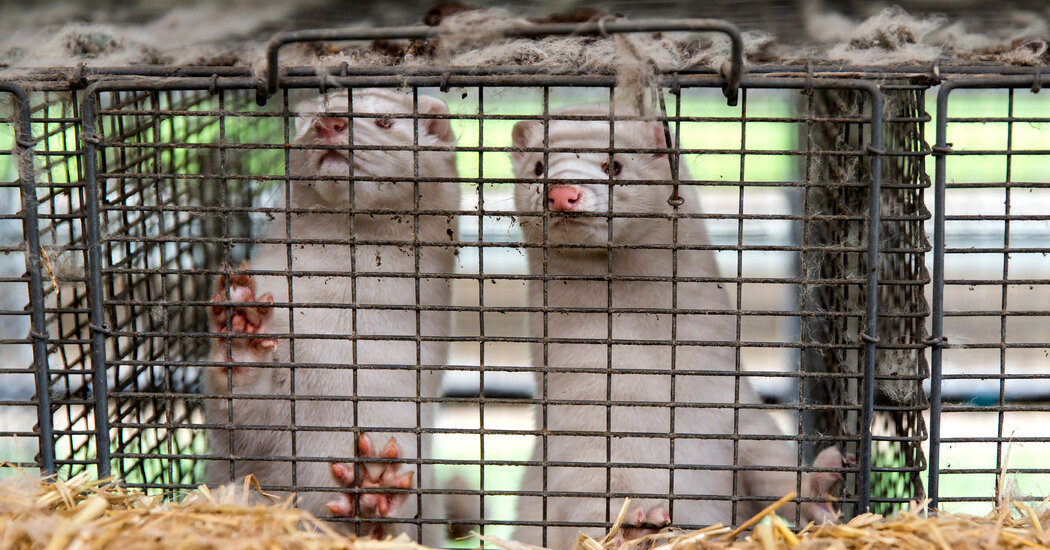 It was the photo of the mink in Denmark, soon to be slaughtered, that hit me the hardest. In it, the animals peer from their cages with open curiosity, ears pricked forward, clever fingers grasping the wire of the cage doors as they study their surroundings. They are clearly trying to figure out what is happening.

What’s happening, it turns out, is that mink can catch Covid-19 from human beings and from each other. Several other species — dogs, cats, hamsters, tigers, monkeys and ferrets — have contracted the virus from people, but only mink, so far, have passed the virus back to us.

Mink are native to North America, but they are farmed by the millions around the world, including here in the United States. (Let’s be clear: “Farmed,” in this context, means the animals are kept in cages until they are killed and skinned for the fur industry.) Few people come into contact with mink, so the news about Covid-19 on mink farms hasn’t elicited the kind of public terror that would no doubt ensue if dog parks became potential superspreaders.

What makes the news from Europe so alarming is that Covid-19 can mutate as it jumps between humans and mink and back again. So far these mutations have not made the virus more easily transmissible or more likely to cause severe infection. But because one set of mutations in one variant of the virus has the potential, at least theoretically, to limit the effectiveness of a Covid-19 vaccine, Danish officials made the extraordinary decision to kill every mink in the country — some 17 million animals.

It’s a heart-wrenching story of mass slaughter and mass graves. The outcry in Denmark, the world’s largest producer of mink pelts, has focused largely on the shaky legal framework for the government’s order, and on its financial devastation to fur farmers. The real question is why such farms exist in the first place.

It’s not news that life on earth is out of balance. We already know that human behavior — not just in burning fossil fuels but also in food production, wilderness fragmentation, habitat degradation and overpopulation, among other planetary depredations — has imperiled everything from global biodiversity to the actual weather. In the general public, however, warnings from scientists and environmental activists have fallen mostly on deaf ears, even when those depredations come with a cost to us.

We have known for decades what happens when we put pressure on wild animals by degrading their habitats, interrupting their ecosystems, keeping them in cages or otherwise failing them. H.I.V., Lyme, bubonic plague, anthrax, Ebola — all are among the many animal pathogens that now infect human beings. The coronavirus pandemic is just the most recent example of what nature has been telling us all along.

“When diseases move from animals to humans, and vice versa, it is usually because we have reconfigured our shared ecosystems in ways that make the transition much more likely,” Ferris Jabr wrote in The New York Times Magazine back in June. “Deforestation, mining, intensive agriculture and urban sprawl destroy natural habitats, forcing wild creatures to venture into human communities. Excessive hunting, trade and consumption of wildlife significantly increase the probability of cross-species infection.”

The earth is paying the price for our convenience. Headlines of the last few weeks have included reports of the United States officially leaving the Paris climate agreement (followed by a record high temperature of 83 degrees Monday here in Nashville); the continuing decline of coral reefs; a devastating hurricane season; coastal plastic pollution caused by Americans; and the Trump administration’s decision to remove gray wolves from the protected species list.

Our mistake was only partly in believing that the natural world was ours for the taking. Our mistake was also in failing to understand that we ourselves are part of the natural world. If this pandemic has taught us anything it’s that we cannot escape the world we have shaped. We must begin right now to make preserving biodiversity a priority, to make protecting wildlife habitats a priority, to make living in closer harmony with our wild neighbors a priority. Keeping ourselves safe from a future of ever-renewing pandemics will mean completely reframing the way we think about the natural world.

“Animals don’t exist in order to teach us things, but that is what they have always done, and most of what they teach us is what we think we know about ourselves,” the British naturalist Helen Macdonald writes in her transcendent new essay collection, “Vesper Flights.” For far too long, human beings believed they’d been given dominion over all the Earth. Now the slaughtered minks in Denmark — and all the creatures who are dying in this human-wrought and rapidly accelerating extinction — are teaching us what we need to do to save them and ourselves, too: We must change our lives.

Margaret Renkl is a contributing opinion writer who covers flora, fauna, politics and culture in the American South. She is the author of the book “Late Migrations: A Natural History of Love and Loss.”

The Particular Pain of Pandemic Grief