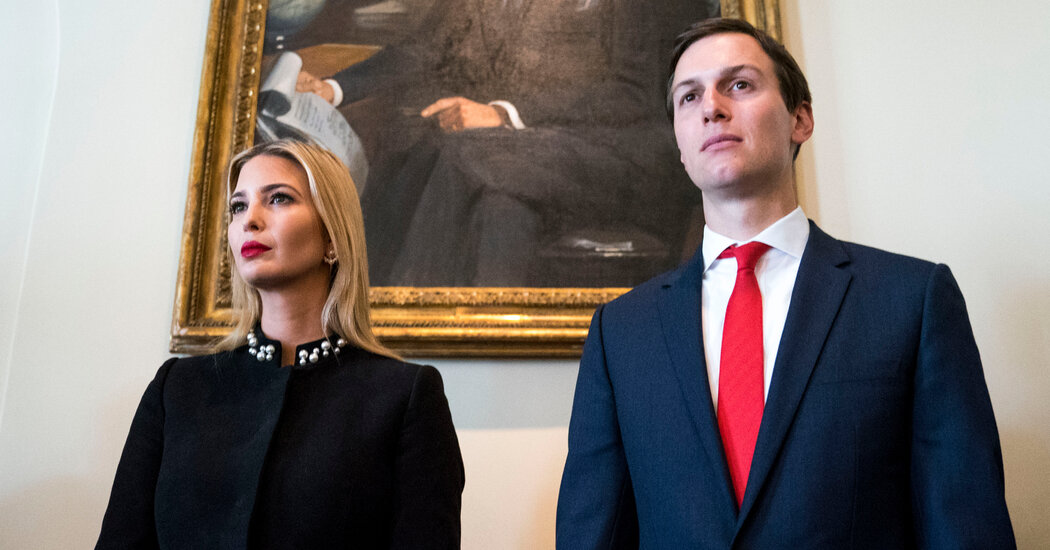 Just five short years ago Jared and Ivanka were dinner-party royalty here in Manhattan. It’s that kind of place. They had money, they had youth, they had celebrity. They were thin. I’m told that their manners were impeccable, so you’d never know that his father was an actual felon and her father a de facto one. Besides, you can’t hold family against someone, can you? We don’t choose how we’re born.

But from then on, we do make choices, and we’re accountable for those.

Jared and Ivanka are about to be held accountable.

They chose to tether their fortunes to her father’s, chose to go along for the ride, chose to see how far it could take them, because what if it took them all the way? What if Ivanka became the first female president, something that Manhattan acquaintances of hers assured me that she fantasized about, a giddy possibility that her father floated out loud.

With that crowning adventure — that climactic branding opportunity — dangling before her, she and Jared rationalized her father’s tantrums, fed his delusions, laundered his cruelty and kept her Instagram aglow with images from their fabulous new Washington life.

They are the Faustian poster couple of the Trump presidency, the king and queen of the principle-torching prom at which so many danced alongside them, although in less exquisitely tailored attire.

They are Mitch McConnell after a makeover, Ted Cruz gone to charm school, Mike Pompeo with a more rigorous fitness regimen, Lindsey Graham with less time on the links. They are Mike Pence and Nikki Haley and scores of others in and out of office, so entranced by power, so enchanted by perks, so primed for future prizes that they junked values that they once supposedly held and downgraded decency to something ornamental, a sprig of parsley on a fish fillet.

Tell me, Jared. Be honest, Ivanka. Was it worth it?

It’s a question for the whole shockingly populous court of collaborators around President Trump. Time will tell. Trumpism isn’t ending. Trump himself isn’t going away. He’ll have his PAC, maybe he’ll have his new media venture, there’s that rumor — I’d call it a threat — that he’s eyeing 2024. A wagon hitched to his may not be veering into the ditch just yet.

But the wagon that belonged to Jared and Ivanka was different from the others. It didn’t fit neatly into the Trump administration’s motley caravan of expedience and ambition: They were glossier grifters. That dissonance brought them special derision, because it was a particularly unsettling illustration of the tradeoffs that people are willing to make, the compromises that they can talk themselves into.

How big a leap was it, really, for Don Jr. to go from hunting big game in Africa to haranguing the political bigwigs whom Daddy dubbed RINOs? No one in Junior’s old crowd was going to be surprised or appalled.

Pence’s and Pompeo’s fellow evangelicals didn’t and won’t begrudge them their worship of Trump, because all of them found that twisted religion together. And no serious observer is disillusioned by McConnell, because no serious observer had any illusions about him in the first place. He does what he must to maximize his impact.

But what of Jared and Ivanka? They epitomized the very entitled, elite class of Ivy-educated, Davos-destined Americans that her father mocked. They were sanctioning the savaging of their soon-to-be-former friends. You could say that they defected. But are they really going to be content in their new social homeland, now that 1600 Pennsylvania Ave. is no longer its clubhouse?

Where, geographically, will they alight? That was a question prominently explored over recent days in Vanity Fair and CNN, which portrayed them more or less as Vuitton vagabonds.

Washington won’t work, not even a suite at the Trump International Hotel, because there’s nothing more pathetic than lingering at a party once the music has stopped.

Mar-a-Loco makes questionable sense. It’s Melania’s sandbox, and she and Ivanka play together about as sweetly as Andrew Cuomo and Bill de Blasio do. New Jersey is where the Kushners have their roots, but Javanka is accustomed to more glitz than that. At this point they’re Aspen, not Asbury Park.

I have suggestions. North Korea, for one. Ivanka has met its ruler and been to the Demilitarized Zone. She wouldn’t have to ask for directions. Saudi Arabia. Jared and Prince Mohammed bin Salman are spiritual twins, conjoined by their sense of superiority.

But it’s New York City, where Javanka still own an apartment, that’s surely drawing their gaze. And that’s, well, awkward. The Trump administration did label it an “anarchic jurisdiction” as part of an attempt to deny it as much as $12 billion in federal funds. Javanka would have some explaining to do.

They might not find many people willing to listen. “Everyone with self-respect, a career, morals, respect for democracy, or who doesn’t want their friends to shame them both in private and public, will steer clear,” one unidentified former acquaintance of theirs told Emily Jane Fox for her Vanity Fair article.

Another said: “Ivanka is no Princess Margaret and Jared is not the Duke of Windsor regaling guests with amusing bon mots to a captive audience. No one wants to hear about Sarah Huckabee’s pies or Steven Bannon’s shirts.” A snob like that actually deserves a dynamic duo like them (and may shed light on how President Trump found the traction in the heartland that he did).

Javanka can’t protest that they moderated the president, not after his past immoderate weeks of raging against democracy and conniving to subvert it. They can’t retroactively claim some profound but strangled ambivalence about his reign, not after her fangirl phantasmagoria at the Republican convention.

No, they have made their bed. Lucky for them, the sheets have a serious thread count.

Memories of Homecoming at Historically Black Colleges and Universities

What Happens if Trump Won’t Leave?