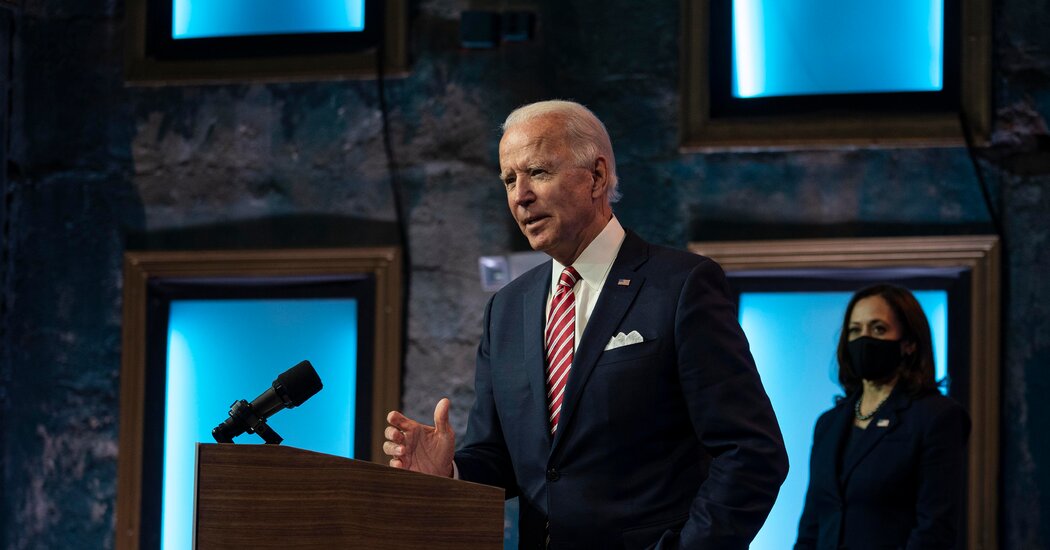 President-elect Joseph R. Biden Jr. warned that a “very dark winter” was ahead and called on Congress to pass an economic stimulus package immediately to help workers struggling to cope with the coronavirus pandemic.

In his first economic address since winning the election this month, Mr. Biden said he supported a national mask mandate to help curb the rise of the virus and that Congress should provide trillions of dollars in fiscal support to workers, businesses and state and local governments.

“For millions of Americans who’ve lost hours and wages or have lost jobs, we can deliver immediate relief and it need be done quickly,” Mr. Biden said. “Congress should come together and pass a Covid relief package” along the lines of the $3 trillion bill that House Democrats passed earlier this year.

Mr. Biden said that combating the virus remained the most urgent matter, however, and called on President Trump to begin the transition process quickly.

“More people may die, if we don’t coordinate,” he said.

Mr. Biden also said that he wanted to see a mask mandate in the United States, reiterating his request for state and local officials to require citizens to wear face coverings as cases surge during the cold winter months. Aiming fire at the Trump administration, he criticized the president and his advisers for attacking leaders of states like Michigan who have imposed new restrictions on businesses to contain rising case numbers.

“What the hell’s the matter with these guys?” Mr. Biden said. “It’s totally irresponsible.”

Vice President-elect Kamala Harris, speaking before Mr. Biden, said they were focused on “opening this economy responsibly and rebuilding it so it works for working people.”

“They represent very different perspectives, but I’m convinced we can all come together around the same table to advance areas of common ground,” Mr. Biden said. He underscored the importance of unity between business leaders and unions and said that unions would have more power under his watch.

Mr. Biden said he supported a robust stimulus package such as the $3 trillion bill that House Democrats passed earlier this year, and he insisted that funding for states and cities needs to be included in such legislation. The president-elect said that sick leave and money for child care were also priorities, arguing that people should not have to choose between working and caring for others.

His speech came at a perilous moment for the recovery.

Credit card data and other indicators suggest that consumers began to pull back spending this month as infection, hospitalization and death rates from the virus surge nationwide. States have begun to impose new restrictions on economic activity in an effort to tamp down the spread.

But stock markets were rising again on Monday, encouraged by news that Moderna’s vaccine for the virus appears to be highly effective.

Still, widespread distribution of a vaccine that would allow Americans to resume anything close to normal levels of travel, dining out and other types of spending on services that have been crushed by the pandemic is likely months away.

Economists continue to call for a new and immediate round of aid from Congress to help people and businesses weather the difficult time before the rebound is complete.