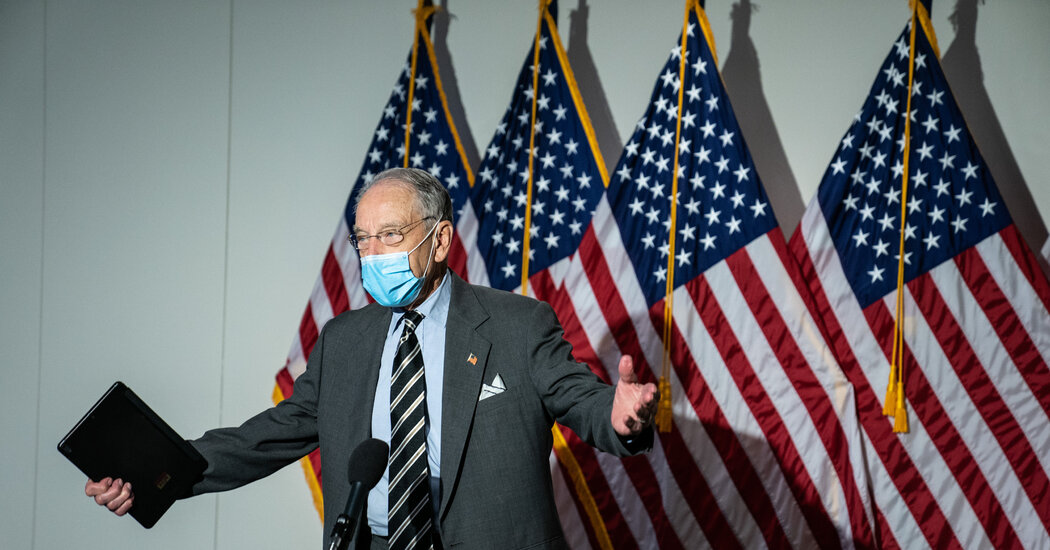 Senator Charles E. Grassley of Iowa, at 87 the oldest Republican serving in the chamber, on Tuesday announced that he had tested positive for the coronavirus, becoming the second octogenarian member of Congress to be diagnosed in the past week.

Mr. Grassley, who had said earlier that he was quarantining after exposure to the virus, said on Twitter that he was “feeling good” and would “keep up on my work” for Iowans from home, following his doctor’s orders and public health guidelines.

He did not disclose any details about the circumstances of his exposure, but Mr. Grassley was on hand Monday as usual to open the Senate in his role as president pro tempore — the post typically reserved for the most senior member of the majority party — and for the first vote of the week. Mr. Grassley took his mask off briefly to deliver remarks on the Senate floor, as many senators do. His remarks focused on the need for continued social distancing and mask-wearing in order to stem the spread of the pandemic, urging “everyone to do their part.”

His positive test result marked the latest alarming development in what is threatening to become a mini-outbreak on Capitol Hill, where lawmakers continue to meet in close quarters with inconsistently applied health precautions.

Representative Don Young of Alaska, the longest-serving member of the House and its oldest member, who is also 87, disclosed on Monday that he had been hospitalized over the weekend as he battled a case of the virus. Two other lawmakers — Cheri Bustos of Illinois and Tim Walberg of Michigan — also announced positive tests the same day.

As multiple votes took place on Tuesday, Mr. Grassley’s absence ended the longest consecutive streak of voting in the Senate held by a single member. The Iowan often boasted of his record of having never missed a vote since 1993, when floods ravaged his state.

Among the votes he missed was one to move to confirm Judy Shelton, President Trump’s pick for the Federal Reserve board, whose nomination stalled in the Senate after it failed to draw enough support to advance.

Object temporarily orbiting Earth is not an asteroid; here is what NASA says

Object temporarily orbiting Earth is not an asteroid; here is what...