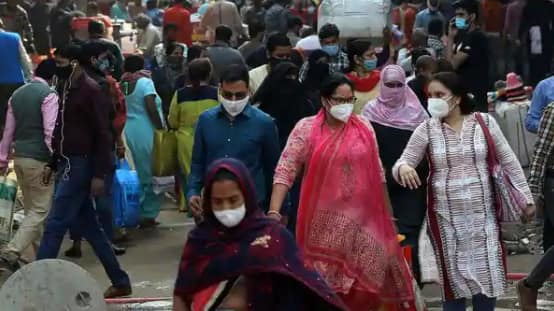 New Delhi: Amid spiraling cases of COVID-19 in the national capital, Chief Minister Arvind Kejriwal on Thursday (November 19) said that a fine of Rs 2000 will be imposed on anyone who is found not wearing a mask at a public place. Earlier this fine was merely Rs 500.

Speaking to media persons after an all-party meeting to discuss the COVID-19 situation in Delhi, Arvind Kejriwal said, “I told all parties in the meet that it’s a difficult time for the people of Delhi when COVID cases are rising. It’s not the time for politics, there is an entire lifetime for it. We should set aside politics and allegations for a few days. This is the time to serve people.”

He said that all the parties agreed that this is the time for all of us to become one and serve the people of Delhi.

On the celebration of the Chhath festival, Kejriwal said, “We want our brothers and sisters to celebrate Chhath Puja very nicely. Please celebrate but if 200 people enter into a pond at a time, and even if just one of them has COVID-19, all of them will contract the infection. This is also the opinion of experts.”

The Delhi CM further said, “You can imagine that COVID-19 will be spread on a large scale. So, celebrations are not banned. What is banned is the entering of a large number of people in a pond or river at once. Let’s celebrate at homes.”

The Congress vehemently opposed the re-closure of Delhi`s markets, adding that it is not correct to close the markets for another lockdown as it will create a crisis of employment for millions of people besides the losses to the business community.

Delhi BJP state president Adesh Gupta is quoted by IANS as saying, “After eight months, you`ve remembered to convene an all-party meeting. The Delhi government could not do a number of things it was supposed to do during the pandemic. This was clear in the pace at which the number of ICU beds were increased and testing is done. The health department of the government could not do contact tracing at all.”

“The people who are living in home-isolation did not get adequate facilities. You spent Rs 125 crores on advertisements in six months, but you did not increase the number of ICU beds. You did not increase ventilators in Delhi. Had the Delhi government taken timely steps, so many deaths from Corona in Delhi could have been prevented,” said Adesh Gupta.

Anil Chaudhary added, “Chhath is a great festival of faith for the people of Purvanchal. Delhi needs the blessings of the Chhat Goddess at the time of infection. I urge the Delhi government to put a review petition in the High Court keeping in view the religious sentiments of people and allow them to celebrate the festival on the ghaats.”

Responding to the Opposition`s charges, Sanjay Singh, AAP`s Rajya Sabha MP from Delhi said, “Whatever the government is doing in Delhi is being done in accordance with the guidelines set by the central government.”

Through the meeting, Chief Minister Arvind Kejriwal told all political parties that there is no proposal to close any market in Delhi at present. Nor is the government going for a re-lockdown. Before taking any such steps market associations and shopkeepers will be taken into confidence.

At the same time, the chief minister admitted that there is a shortage of ICU beds in Delhi which is being addressed in tandem with various agencies. Kejriwal appealed to all opposition parties not to do politics over Covid.

Meanwhile, the number of available Intensive Care Unit (ICU) beds equipped with ventilators is shrinking fast at several hospitals in the national capital amid spiraling cases of COVID-19, with zero vacancies at nearly 60 facilities, according to official data.

According to the online Corona dashboard of the Delhi government at 12:30 pm on Thursday, only 131 COVID-19 ICU beds were available out of 1,362 such beds at various facilities.

Delhi has witnessed a spurt in coronavirus cases since October 28, when the daily rise breached the 5,000-mark for the first time, and it crossed the 8,000-mark on November 11. The national capital recorded 7,486 fresh COVID-19 cases on Wednesday, taking the city’s infection tally to over five lakh, even as 133 more fatalities, the highest single-day death count to date, pushed the toll to 7,943, authorities said.

The highest single-day spike to date in the national capital — 8,593 cases — was recorded on November 11.

A Reckoning Over Objectivity, Led by Black Journalists