The RJD and its allies on Wednesday had attacked Nitish Kumar for appointing Choudhary as the Education Minister even though he was facing corruption charges and was suspended from the party over the issue. The opposition parties also demanded that Choudhary be sacked.

Bihar Governor Phagu Chauhan accepted the resignation of Mewalal Choudhary with immediate effect, and a letter in this regard was also issued from the Governor’s office. 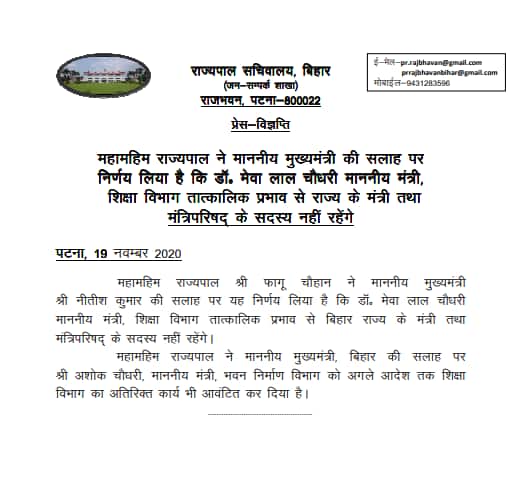 Choudhary, former vice-chancellor of an agriculture university and a first-time minister, is reportedly facing serious charges under the Indian Penal Code, including cheating and dishonestly (section 420), and criminal conspiracy (120B).

Earlier in 2017, Choudhary was suspended from the JD(U) after an FIR was registered against him over alleged irregularities in appointments during his tenure as the Vice-Chancellor of the Bihar Agriculture University, Sabour in Bhagalpur district.

The FIR was registered against him over some anomalies in the appointment of Assistant Professors and junior scientists. The BJP, which was in the opposition during the Grand Alliance ministry, had strongly raised the issue against Choudhary.

Chaudhary had left his job to contest the 2015 Bihar Assembly election on a JD(U) ticket and was elected from Tarapur constituency in Munger district. He again won from the same seat in the just-concluded state Assembly election and has been made the Education Minister.

Notably, Mewalal Chaudhary’s residence wore deserted after his resignation. Till a few hours ago, there were a lot of visitors to congratulate him, but now there is complete silence. Government carriage and personnel have gone back. Zee media correspondent Shailendra is giving more information.

Meanwhile, BJP has defended Mewalal Chaudhary’s resignation. BJP spokesperson Ajfar Shamsi stated that the Opposition should learn a lesson from this resignation, adding that Chaudhary has resigned on the moral ground though charges against him are yet to be proved.

How Archaeologists Are Using Deep Learning to Dig Deeper