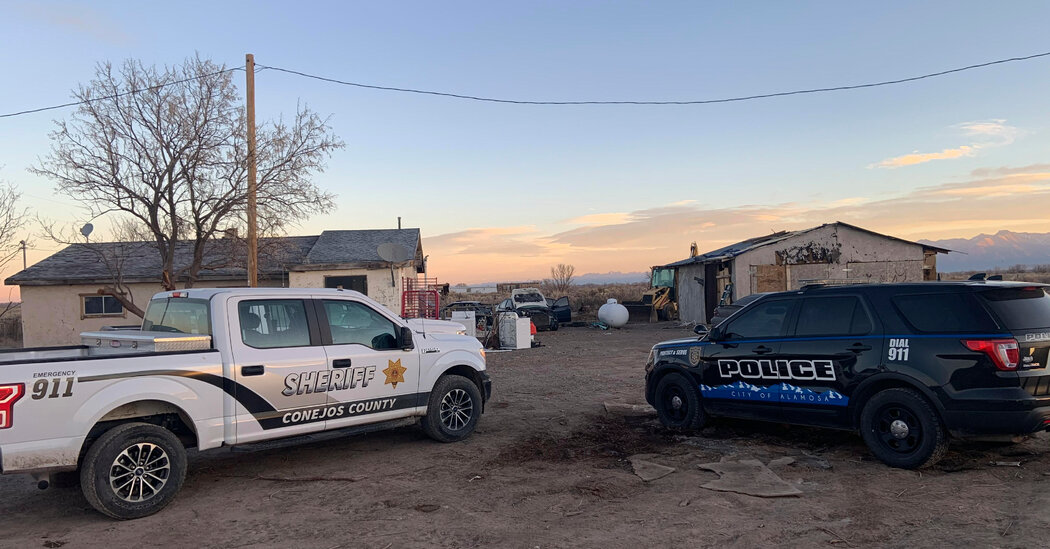 A manhunt was underway in Colorado on Wednesday after the authorities recently discovered the skeletal remains of three people in a tiny rural town near the New Mexico border.

A warrant for homicide was issued for Adre Jordan Baroz, 26, after investigators said they had found the remains on two properties near Los Sauces, in Conejos County, Colo.

The authorities did not say how they had connected Mr. Baroz to the remains, but said that people in the community know Mr. Baroz by his nickname, Pyscho.

Law enforcement agents warned that he was dangerous and said that the discovery of the remains had deeply unsettled people in the county, a mountainous region of ranches and farmland that is home to about 8,000 residents.

“Obviously, we don’t see cases like this very often,” Ken Anderson, the chief of police in Alamosa, Colo., said at a virtual news conference on Wednesday with officials from several other local law enforcement agencies as well as the Colorado Bureau of Investigation.

“It’s a very tight-knit community,” Chief Anderson said. “We really know a lot of people here. Most of us have grown up here. So now we’re at a point that it is imperative that we get this individual off the street. When I say he’s a danger to the community, I mean exactly that — he’s a danger.”

Officials said they had discovered the first skeletal remains on Nov. 10 after they went to a property near Los Sauces to execute a search warrant for stolen vehicles and equipment. The discovery led them to more remains on a nearby property, on Nov. 13.

Officials declined to describe the properties, but said they were not owned by Mr. Baroz, who is from nearby Sanford, Colo.

George Dingfelder, the chief of police in Monte Vista, Colo., said that a forensic anthropologist had confirmed that the remains were human. But the authorities said they did not know how the people died, how old they were, their gender or how long the remains had been on the properties.

Chief Dingfelder said it could takes weeks or months to identify the victims.

The authorities declined to describe the evidence that led them to obtain a warrant for Mr. Baroz’s arrest. But law enforcement officials said they had set up a hotline to collect tips and had formed a task force to help investigate the case.

“Our department is just not big enough to handle what we were running into,” Garth Crowther, the Conejos County sheriff, said at the news conference. He said the discovery of the remains was “kind of a shock here.”

People are “concerned about it,” Sheriff Crowther said. “They need to be cautious and be careful.”

Chief Dingfelder emphasized that the remains were not necessarily connected to a number of cases of missing people in the San Luis Valley.

“Just because human remains have been found, we are not associating them with the missing persons cases at this time,” he said, “and for anybody to do so would be irresponsible and complete speculation.”

Depressed woman jumps to death in Noida, man hangs self in Greater Noida