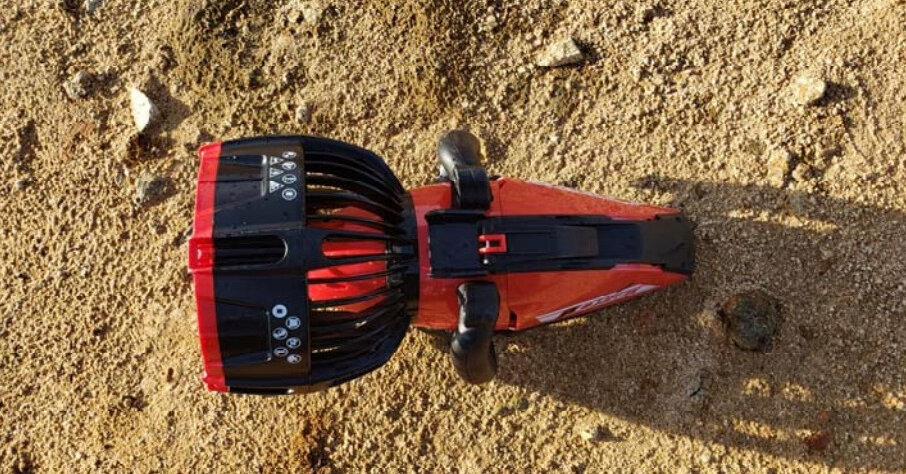 When the authorities went to arrest Matthew Piercey on Monday for what they said was his role in running a $35 million Ponzi scheme, he took off in his truck and led them to Shasta Lake, the largest man-made reservoir in California.

Tracked by air and trailed by F.B.I. agents and members of the California Highway Patrol, Mr. Piercey, 44, of Palo Cedro, Calif., was seen removing something from his truck and entering the frigid water with it in his street clothes, the authorities said. After about 25 minutes in the lake, part of which he spent submerged, a very cold and wet Mr. Piercey emerged and was arrested, the Justice Department said.

The agents allowed him to change into dry clothes that they had obtained from his wife before escorting him to the nearest F.B.I. field office, in Sacramento, the department said.

Mr. Piercey’s red Yamaha 350Li, an underwater sea scooter, was taken as evidence, the authorities said. The commercially available, battery-powered scooter has an enclosed propeller that can pull a diver underwater at just under 4 miles per hour, much faster than humans can move with fins.

It was not clear how long Mr. Piercey was underwater. Neither the F.B.I. nor the Justice Department answered questions about whether he used a snorkel or any kind of scuba gear to stay submerged.

The Justice Department noted in a detention memorandum, however, that Mr. Piercey “spent some time out of sight underwater where law enforcement could only see bubbles.”

Mr. Piercey was accused in a federal indictment of running a Ponzi scheme that bilked investors out of approximately $35 million between 2016 and earlier this year through two companies he helped run, Family Wealth Legacy and Zolla Financial.

Family Wealth Legacy solicited investments in securities, cryptocurrency mining and life insurance, the indictment says. Zolla Financial raised funds through transactions that “were typically styled as loans offering a fixed return, with the company’s returns purportedly generated through algorithmic trading,” according to the Justice Department.

“Piercey often paid off his lines of credit, credit cards, and personal and business expenses with investor funds, and his companies did not generate revenue sufficient to cover overhead and expenses while still paying investors the returns they were promised or otherwise led to expect,” the Justice Department said in the detention memorandum.

The Justice Department said Mr. Piercey had a pattern of paying old investors with money he raised from new investors “while making various false and misleading statements, half-truths, and omissions” to hide his “constant downward financial spiral.”

A colleague of Mr. Piercey’s, Kenneth Winton, 67, of Oroville, Calif., was charged separately on Monday with a single count of conspiracy to commit wire fraud.

Messages left with David Fischer, a lawyer representing Mr. Piercey, were not immediately returned. Adam Gasner, a lawyer for Mr. Winton, said in a statement that his client “was made aware of these allegations and will immediately and voluntarily appear in court.”

“Mr. Winton is a family man with no prior criminal record and wishes to address the conduct alleged to have been committed by him and not be prejudiced by the actions of others charged in this case,” Mr. Gasner said.

Josh Kons, a lawyer who represents investors in securities fraud matters, said he was stunned by Mr. Piercey’s attempt to elude law enforcement.

“You never really know what people are thinking about when they get indicted or when the F.B.I. tries to bang down their door, but certainly this one goes down in the books,” said Mr. Kons, who has consulted with people who say they lost money to Mr. Piercey. “I don’t know if we’ll ever see a more novel escape attempt by a Ponzi scheme artist again.”

The audacity of Mr. Piercy’s run from the law, Mr. Kons said, should not obscure the human costs of this kind of fraud.

“Ponzi schemes really hurt people,” he said. “It’s fairly rare that victims get more than pennies on the dollar at all, and it certainly seems that these people may suffer a complete loss.”

Why can`t Centre hold talks with Pakistan if they can with China: Mehboob Mufti

Dave Prowse, Man Behind Darth Vader’s Mask, Is Dead at 85

For Lesbians, TikTok Is ‘the Next Tinder’

The Daily News Is Now a Newspaper Without a Newsroom

The Trump campaign picks David Bossie to lead the charge on its postelection battles.

Why can`t Centre hold talks with Pakistan if they can with...

Dave Prowse, Man Behind Darth Vader’s Mask, Is Dead at 85