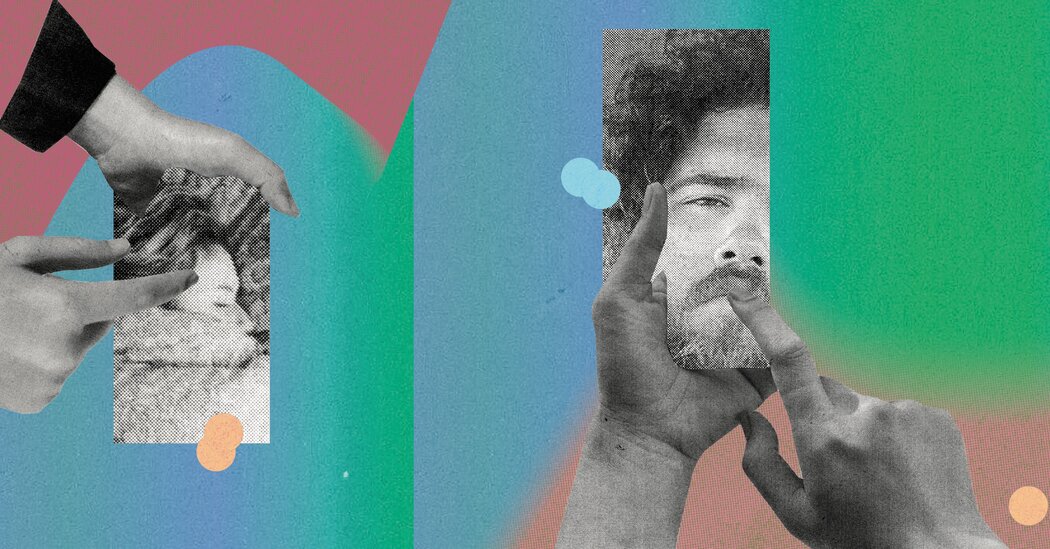 In a world of viral-video stars who flaunt, twirl and twerk to lure viewers, @someguywithaguitar is a model of benevolent indifference. In the most-liked of his videos, the musician — a young man with frizzy hair and a soft, untended lumberjack beard — sits in the passenger seat of a car as he plays a moody, twangy riff, his eyes cast heavenward or off to the side. The melody requires technical precision, but the video is resolutely low-fi: The unedited, muffled sound of wind filters through, and the breeze gently moves wisps of his hair this way and that. If you squint, you can see only a tiny square of green background out the back window; he could be sitting anywhere, really — his own driveway, or some pastoral idyll, or the parking lot of a Kroger while his mom is stocking up on paper towels. It’s mundane, it’s sublime and it’s intimate, a glimpse into someone else’s unguarded reverie.

The lumberjack-bearded musician is just one of a group of TikTok creators whose feel-good, under-a-minute clips I’ve been consuming regularly. What these creators have in common is the way they capture, fleetingly, a mood I want to be inside of right now — a vibe, to use a word that has recently come to define a substantial corner of the platform. The best-known of these creators is @420doggface208, real name Nathan Apodaca, who filmed himself skateboarding down an unremarkable street to “Dreams” by Fleetwood Mac, his free hand clutching a 64-ounce bottle of Ocean Spray Cran-Raspberry juice; the video went so viral that TikTok co-opted it for an advertising campaign that began running during the N.B.A. finals. These good-vibe TikTok creators do go to the effort of filming themselves and posting the results, and yet there is something convincingly un-self-conscious about how they do it. The vibe is chill; it chills, contagiously. The vibe is pure. The vibe is: It’s a pandemic, we’ve got nothing but time, might as well play some guitar right here in the parking lot.

I watch these videos with admiration and no small amount of longing; they access a humor and a lightness, a belief in the easy accessibility of everyday beauty, that I have trouble locating in my environment of late. My own home sometimes feels like a shoddily run penal institution, as my husband and I either ignore our 14-year-old twin boys to work, or hover anxiously over them, making sure they are staring at the right screens (their laptops, where their teachers are) and not the wrong ones (their phones, where friends and Fortnite videos beckon). We construct elaborate rules about weekday and weekend screen time, promptly forget what they are, then start over. We are resigned to the certainty that nothing will ever change, that we will all be cooped up in this house forever, that if we are looking for freshness in our lives we will most likely find it in the new and different faint food stains that seem to be appearing regularly on our beige couch, a couch we will never get around to replacing because of an overwhelming inertia, and because in any case Ikea is backed up until (checking website) the next pandemic.

I am sure all this explains why, even before I started watching TikToks, I was already fascinated by any positive vibe I could spot in the wild. Since I never go anywhere, it was convenient that I found one right next door. Jesse, my new neighbor, moved in with his family and an antic something-doodle in early summer, after the cold fear of the first wave had passed. As I sat on my outdoor couch on any given warm day trying to work, I could see, inside, my boys hunched over their computers; but a few feet away, there was Jesse, pushing his giggling son high in the air on a round rainbow-striped swing hung from a tree. Or there was Jesse, taking a work call while lounging on a bright yellow hammock, or building a massive fire pit with salvaged bricks that some previous resident had chucked into the far reaches of their backyard. It was almost galling. He built a bonfire for his family one night, when my husband and I were social-distancing in our backyard with friends, peering at one another in the dark across dim solar-powered lanterns. We all stood up to stare at the magnificent blaze, and I think it’s safe to say we shared the same collective thought: What are we doing on this side of the fence, and how do we get ourselves over to that one? We wanted in on their vibe.

After Jesse and I became friendly, he started texting me some of his favorite TikToks, most of which share his kind of contagious vibe. As a result, by now, I’ve watched over and over the parking-lot musician, but also a clip of a young man in South Africa named Ziyaad, who pulls his head-kerchiefed mother, middle-aged father and homework-absorbed little sister into the throbbing rhythm of some soft house music; what makes it work is the way all their faces, except his, betray the tiniest hint of indulgence, rather than outright enthusiasm.

In another, a young woman rocks out hard to Whitney Houston, her face contorting with emotion, while taking breaks to play along on her recorder. In yet another, a young man skates backward on an autumnal country road, an electric guitar wailing in the background; when he spins around to face the camera in slow-mo, his shirt unbuttoned, he treats the viewer to the sight of his big, pale belly.

Through some alchemy of music and editing, the short clips evoke, without all the buildup of a movie or the need to be there in person, a particular distilled feeling or a scene. In part, the creators achieve this by excluding the context of their own lives — editing out their own pandemic situation and allowing the viewer to inhabit, albeit briefly, the kind of mood that can feel so hard to sustain this year. For those who aren’t going to a workplace, who aren’t traveling, who are barely hitting the grocery store, the novelty of gaining access to someone else’s scene holds unusual power now. When @someguywithaguitar does finally look into the camera, I always feel a jolt — he makes just enough eye contact to create the illusion of connection with someone out there, someone in need of his vibe.

Soon, the cold will bear down, and my neighbors will be swallowed up inside, taking with them the groovy backyard scenes I’ve shared vicariously. I’ll ask Jesse to keep sending me those good-vibe TikToks, and for a few months, that will have to be enough.

Democrats’ Anger Over Barrett Could Have Big Consequences in the Senate

Extra $300 Stimulus Unemployment Payment: Who Will Get It and When?