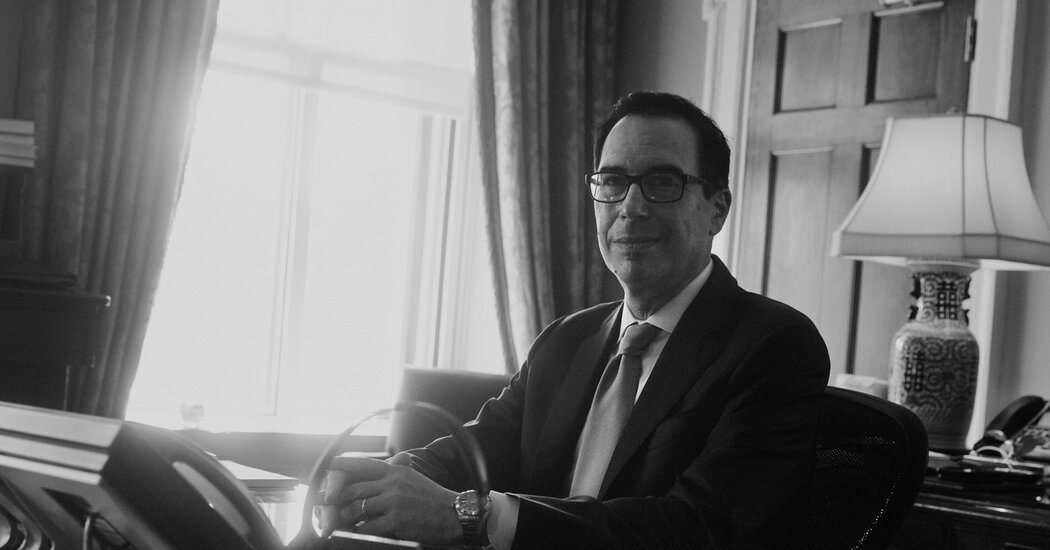 Treasury Secretary Steven Mnuchin has embraced a terrible idea that has been circulating among senior officials in Washington over the past few weeks. Citing improving economic conditions, Mr. Mnuchin has essentially declared “mission accomplished” for programs that have contributed to the economy’s recovery so far and is allowing them to expire at the end of the year.

The programs, part of the CARES Act, include the allocation of hundreds of billions of dollars to the Treasury Department in partnership with the Federal Reserve. As the economy foundered in the spring, those programs helped keep companies and municipalities afloat. They were set to expire on Dec. 31, and Jerome Powell, the Fed chair, and Mr. Mnuchin had the option of extending them.

Instead, the Treasury secretary has made the reckless political decision to terminate them, thereby pulling the plug on these vital programs and potentially destabilizing fragile financial markets.

The decision appears intended to limit the incoming Biden administration’s options to deal with the continuing crisis, a damaging departure from the successful approach taken during the presidential transition in the bleak days of the Great Recession. Then, the outgoing Treasury Department did all that it could to preserve President-elect Barack Obama’s discretion to use congressionally approved bailout funds from the Troubled Asset Relied Program (which I oversaw as the program’s special inspector general) to steer our nation’s recovery.

Mr. Mnuchin’s decision also drew an extraordinary and immediate rebuke from the Federal Reserve, which said it prefers “that the full suite of emergency facilities established during the coronavirus pandemic continue to serve their important role as a backstop for our still-strained and vulnerable economy.”

The Treasury should reverse this reckless course and follow the precedent set with TARP by extending these programs to give the newly elected administration as much flexibility as possible.

The Treasury and Federal Reserve have used the CARES Act money for programs through which the Fed can buy up to $2.5 trillion in corporate bonds, loans to medium-size businesses, bonds sold by state and local governments, and other financial instruments. After the Fed’s announcement of a $700 billion program to purchase corporate bonds, what was a frozen corporate debt market quickly thawed.

Just the promise alone to serve as a “backstop” has reassured markets, and struggling companies have since been able to find buyers for their debt at reasonable prices, giving them a better chance to avoid bankruptcy and major layoffs.

The record for other programs, particularly the ones that buy municipal bonds and help provide loans to medium-size businesses that otherwise cannot find a willing lender, has been more mixed. The municipal lending facility, for example, has led to the purchase of only two bonds from local governmental entities, which in general continue to struggle even as nearly a half-trillion dollars of committed program funds sit on the sidelines. Similarly, the underwriting requirements and tight terms for the Main Street Lending programs have led to reports of fewer than 500 loans — that amounts to around $5 billion of the $600 billion committed. Their reach appears to have still fallen short because strict lending terms demanded by Treasury and the Fed have left many borrowers unable to participate.

Republicans like Senator Patrick Toomey of Pennsylvania cited the low participation and the calming effect of the existence of the programs as a justification to terminate them — the position Mr. Mnuchin has embraced. But now, as record infection levels have prompted governments to impose new restrictions across the country, this is a grave error. Indeed, to the extent that the programs have been successful, it is because of what they could potentially do rather that what they actually did.

It is precisely because participants in the bond markets know that the Fed is standing by with hundreds of billions of dollars that they confidently continue to buy and sell these bonds. It makes no sense to celebrate the programs for the success they have had in calming markets while at the same time pulling the rug out from under them at a time when they are likely to be most needed.

Terminating them also breaks from the approach taken by the last administration that was leaving office during an economic crisis. In 2008, the Treasury Department under Henry Paulson was committed to giving the incoming Obama administration maximum flexibility to influence and direct $700 billion in TARP funds.

Even though Bush administration expressed concern to me that the new administration would use TARP in ways that they would not, they understood it was important to give the newly elected administration as much flexibility as possible.

Doing so here would both provide continuing assurance to the markets and allow the incoming administration to exercise its own discretion over the programs’ reach. Taking a cautious approach, the Treasury Department has put a premium on minimizing potential losses — with a result that stricter lending terms have inhibited broader participation.

But that decision was not compelled by Congress; it was the result of Treasury’s policy choices. The incoming administration could choose a different path, like extending the programs to more borrowers and on more favorable terms. That may increase risk, but the new administration may decide that it is worth shouldering potential losses in return for directing money to struggling parts of our economy, potentially allowing municipalities and companies alike to avoid huge job losses.

The outgoing Trump administration should follow the wise precedent set by the Bush administration and not succumb to the political temptation to straitjacket its successor. It should reconsider its shortsighted decision and instead extend the programs. Given the stakes of the pandemic and its impact on the economy, the Biden administration deserves to make its own policy decisions on how best to use the CARES Act funds to stabilize the economy and support a recovery.

Neil Barofsky, the former special inspector general for the Troubled Asset Relief Program, is a partner at Jenner & Block.

Wisconsin Democrats ponder the convention that might have been.

Montaigne Fled the Plague, and Found Himself