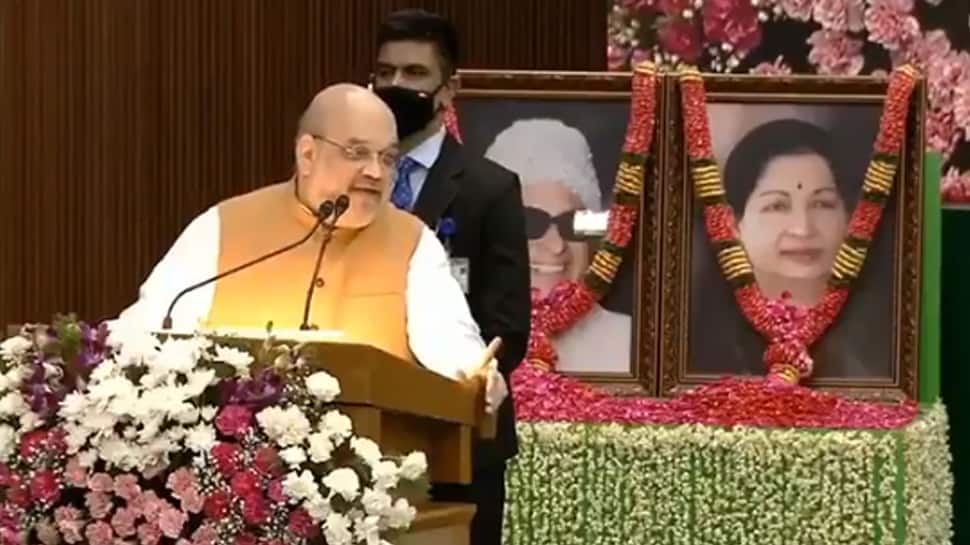 Union Home Minister Amit Shah on Saturday slammed the MK Stalin-led DMK and the Congress in Tamil Nadu asking them what good has the UPA government done for Tamil Nadu during their 10-year long rule at the centre.

Taking to micro-blogging site Twitter, “I want to ask the DMK and Congress party what good has the UPA govt done for Tamil Nadu during their 10-year long rule at the centre. PM Narendra Modi led central government has given the state of Tamil Nadu its due rights.”

In making an address after dedicating the fifth reservoir for Chennai and laying the foundation stone for various infrastructure projects in the state. He stated, “In last union budget of Manmohan Singh government in 2013-14 Rs 16,155 crore was allocated to Tamil Nadu. In our latest union budget, we increased this to Rs 32,850 crore for Tamil Nadu and in addition, extra was allocated.”

I want to ask the DMK and Congress party what good has the UPA govt done for Tamil Nadu during their 10-year long rule at the centre.

PM @NarendraModi led central government has given the state of Tamil Nadu its due rights. pic.twitter.com/Ht0DZDvv3g

“I would like to pay my respects to former chief ministers, MG Ramachandran and J Jayalalitha. Their work for the people of Tamil Nadu can never be forgotten,” he said.

“The Narendra Modi government has given the state of Tamil Nadu its due place and its rights, something which no other government at the Centre had been able to do. Would like to congratulate the Chief Minister and the Dy Chief Minister of the State, on Tamil Nadu being one the best states that have combatted the COVID-19 pandemic. Tamil Nadu has a COVID-19 recovery rate of 97 per cent,” he stated.

Tamil Nadu government has taken very good care of pregnant women and newborns during this difficult period of the pandemic, he added. “PM has given Rs 6,000 per annum directly into farmers pockets in the country. Totally Rs 95,000 crore has been transferred directly into farmers accounts in three years. While Congress only exempted loans worth Rs 60,000 crore during 10 years of its rule. In Tamil Nadu, 45 lakh farmers have been provided Rs 4,400 crores,” he added.

“The Blue Revolution Fund of government is of Rs 20,000 crore for development of the Fisheries sector. Tamil Nadu has great potential. It is no. 4 state in the country in fisheries. TN has the potential to emerge no. 1. Cooking gas provided to 13 crore families under Ujjwala Yojana, of this 52.76 lakh women have benefitted in Tamil Nadu. Toilets constructed in every household, all households to be provided tapped water supply under Jal Jeevan Mission and now Modi Govt aims to provide Houses for All by 2022, the 75th year of India’s Independence,” he added.

Shah also said, “Only 15% of Tamil Nadu’s population gets water supply at home but under JJM 1 crore 20 lakh households will be provided tapped water supply, and 9 lakh households have been already covered. The Modi government has approved defence industrial corridor for Tamil Nadu. Rs 2.25 lakh crore has been given to Tamil Nadu under Sagarmala project.”

“PM laid the foundation stone of AIIMS in Madurai with the sanction of Rs 1,264 crore. Work on East Coast Road has begun with an investment of Rs 13,795. PM inaugurated APJ Abdul Kalam Memorial in Tamil Nadu. Tejas Express on Chennai- Madurai route has been started and is an example of Made in India,” he added.

For Boris Johnson, a Week to Exorcise the Demons of 2020

Biden Wants to Rejoin Iran Nuclear Deal, but It Won’t Be Easy

For Boris Johnson, a Week to Exorcise the Demons of 2020