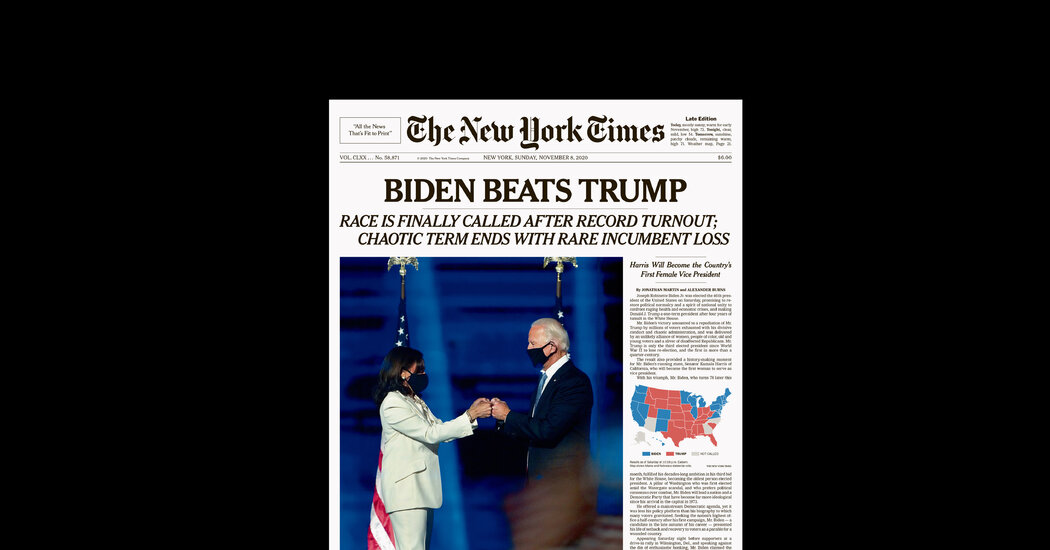 A funny thing about print journalism is that the most momentous events often call for the simplest headlines. MEN WALK ON MOON did not require any great turn of phrase or judicious selection of information, yet it had a crisp power that endures decades later.

But which two or three words would declare the winner of the 2020 presidential election atop The New York Times? The debate went on for days in a chain of emails among more than a dozen editors from various departments.

For this “hammer head,” we had to prepare for a wide range of outcomes: A close win by Joseph R. Biden Jr. A narrow victory by President Trump. A Biden landslide. A decisive Trump re-election. And there was the very real possibility of no winner on election night. (More on that later.)

In the event of a Trump win, we preferred TRUMP PREVAILS — nothing fancy, but it would say a lot in two words.

The Biden options included IT’S BIDEN and BIDEN’S MOMENT. But the consensus was that if Mr. Biden won, Mr. Trump’s defeat would be a significant part of the story as well, given the president’s domination of the news cycle for four years.

So the best course, we felt, was to go straight: BIDEN (verb) TRUMP. The next question: Which verb?

“Defeats feels a tad bland,” said Dean Baquet, the executive editor of The Times, later adding, “Ousts feels like a coup.” Some felt that topples was too close to ousts.

What we needed was simple. Powerfully simple. BIDEN BEATS TRUMP. Clear and crisp, a rapid-fire combination of three five-letter words. And it took a dozen journalists only about 25 emails to get there.

While this particular discussion was unusually extensive, headline collaboration at The Times is not at all unusual. Most Page 1 headlines face scrutiny by at least five sets of eyes.

We are both members of the Print Hub, the team responsible for producing the newspaper on paper. In the old days, we were called copy editors. Our responsibilities include writing headlines, photo captions and other “hardware,” or display type, and working with designers to make sure articles fit their allotted spaces in the many sections of the paper.

On a typical night, a Print Hub editor may be assigned to write the hardware for one front-page article, which is reviewed by a second print editor. The proposed headline is also sent to Steve Kenny, the senior editor for nights, who either suggests revisions or moves it along to the masthead editors for final approval. Once it’s on the page, the headline is subject to further polishing by other print editors.

In the print newspaper, obviously, space is a consideration. A headline must fit, be clear and accurate, and have a certain liveliness to it, all while adhering to a long list of rules (that’s a whole other Insider) that can make the task feel a little like trying to solve a linguistic Rubik’s Cube. It can take minutes, or it can take hours.

And sometimes, after the first edition closes at 8 p.m., the article develops further or we simply realize we can do better. So we do it all again.

On Election Day, we knew we wouldn’t have an outcome for that first edition. The lead story for the early papers would be a “mood” piece, focusing on the high turnout and the stakes in a divided and virus-ravaged nation. We went with this banner:

TURNOUT SOARS, ALONG WITH SUSPENSE,
AS NATION IN TUMULT DELIVERS VERDICT

And this secondary headline, or bank:

We hoped to have a more decisive banner for the later editions. But as the night wore on, it became apparent that was not going to happen, not even for the final edition, which closed after midnight. The challenge faced by the Print Hub, as opposed to our colleagues on the website, was that we needed to write a permanent headline for events that could be drastically different by the time the paper landed on doorsteps. So we kept the “turnout/suspense” banner for all editions but updated the bank to say:

Wednesday night was more of the same. We had to be extremely careful about not saying more than we knew for sure, although we were able to convey Mr. Biden’s growing momentum and Mr. Trump’s efforts to undermine the process:

Buoyed by Wisconsin and Michigan,
Democrat Sees a Path to Victory

On Thursday, the outcome continued to take shape, gradually …

BIDEN VAULTS AHEAD IN PENNSYLVANIA,
WHICH OPENS PATH TO THE WHITE HOUSE

On Saturday, we were less than an hour from the noon deadline for the Sunday paper’s first edition — what we call the Bulldog — and planned to go with this:

SLOW COUNT AND CAUTION ON THE CALL
KEEP BIDEN ON BRINK AND U.S. ON EDGE

Then Mr. Biden was declared the winner. We pulled the BIDEN BEATS TRUMP hammer head out of mothballs and set to work on the secondary banner and the bank: