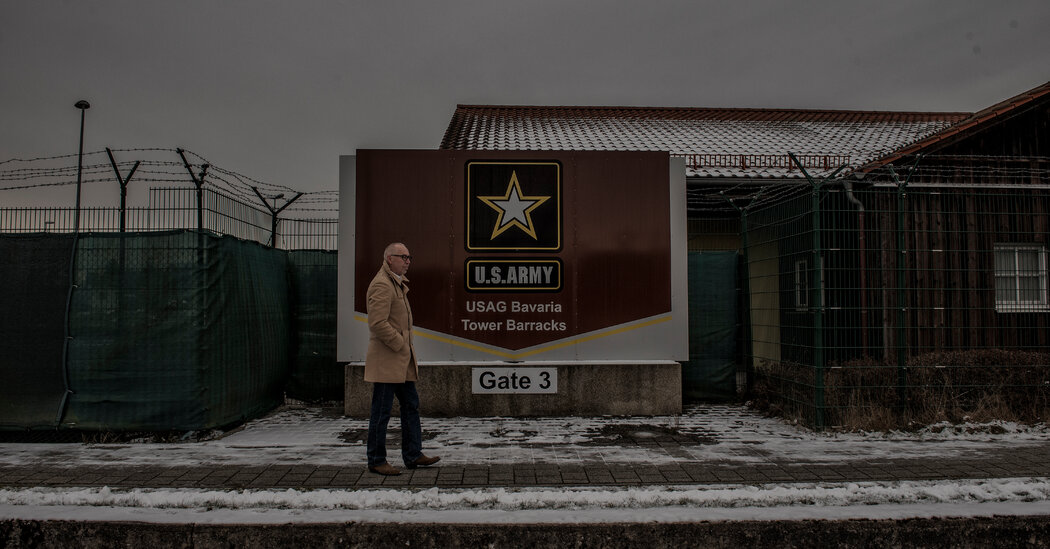 VILSECK, Germany — There is a bar here called “Cheers,” and there are Halloween parties, decorated houses and trick-or-treating in October and turkeys at Thanksgiving. The mayor’s childhood memories include Hershey’s bars, jars of peanut butter and Wrigley’s gum.

For seven decades, the rituals and rhythms of American life have interwoven with the local traditions of Vilseck, a small Bavarian town near the Czech border that is home to the Rose Barracks U.S. military base. Here, the German-American Volksfest is the biggest fair of the year, and the longstanding ties between Germany and the United States are defined not as “the trans-Atlantic relationship,” but as simply, “friendship.”

Mayor Hans-Mart Schertl said, “When I have a problem, I just pick up the phone and call the commander,” Col. Joseph Ewers, who leads the U.S. Army Second Cavalry Regiment and oversees the several thousand U.S. service members stationed at Rose Barracks with their families. “I wish the leaders in Berlin and Washington had ties as good as ours, it makes it easier to solve problems.”

That warmth has endured the minor culture clashes that Mr. Schertl has navigated as mayor, like smoothing things over between irate German landlords and their American tenants who cut pet doors into human doors, or having to call in the Army’s military police to wrangle soldiers who get carried away on German beer.

Mr. Schertl has seen repeated changes of command on the base, and watched countless service members and their families rotate in as wide-eyed strangers, and back out as friends. But he never thought he would face the prospect that a large part of his town’s population, the “American fellow citizens,” could be pulled out overnight.

In July, the Pentagon ordered the withdrawal of 12,000 of about 36,000 troops in Germany, which President Trump attributed to Germany being “delinquent” on military spending, and he has since hinted at further drawdowns.

The move sent a sense of panic through places like Vilseck, where the U.S. military presence is a pillar of the local economy.

This month, Congress approved a $741.5 billion defense-spending bill that would prohibit the Defense Department from stationing fewer than 34,500 service members in Germany, without first submitting a detailed report on the matter and then waiting 120 days. Mr. Trump vetoed the bill on Dec. 23, but the House voted on Monday to override his veto, and the Senate is expected to vote soon on overriding.

“It is the biggest Christmas present possible for Vilseck,” Mr. Schertl said.

But even if that gift materializes, Mr. Trump’s drawdown is a reminder that the U.S. presence does not come with a guarantee.

For many German families, ties to the Americans go back to the post-World War II years when Bavaria was part of the U.S.-administered zone of Germany, and the soldiers stationed there brought not only candy, music and a touch of worldliness, but reliable jobs.

When Wolfgang Dagner graduated from high school in 1983, he needed to make some money before starting college. Following in the footsteps of his father and grandfather, he took a job working for the Army in Grafenwöhr, a town adjacent to Vilseck that is home to a large military training area.

“I wanted to take a year off before going to study, but I enjoyed the work so much that I stayed,” said Mr. Dagner, now 56.

Before 1990, U.S. bases in Germany employed some 120,000 locals, but several bases closed as the Cold War ended. Today about 12,000 people in Germany work on installations for the Americans.

Mr. Dagner now works on a council representing more than 400 support and logistics workers employed at the bases, whose official roles include helping keep troops fed, repairing their offices, homes and equipment, organizing their moves and supplying them with gear when they arrive.

Unofficially, they serve as cultural translators, offering guidance on when and where it is appropriate to wear traditional Bavarian attire, tips on where to find Oktoberfest celebrations and warnings about the strength of a “mass,” or slightly less than a quart, of beer.

“We have to tell them that Bavarians don’t always wear a dirndl and lederhosen,” said Andrea Orr, who works at the military exchange store in Grafenwöhr. “And that Oktoberfest is not only in Munich, but takes place in many smaller towns and villages.”

Alcohol-fueled incidents tend not to escalate, and when they do, the longstanding cooperation between local and military police helps to keep the peace on all sides, the mayor said.

Some U.S. troops who have arrived in Vilseck after deployments in Iraq or Afghanistan have spoken openly about their experiences, many of them traumatic, and the effect that combat has had on their lives. In a country whose own troops are largely invisible, and where there is little public discussion about their service in conflicts abroad, the Americans have made the scars of war palpable to their German neighbors, said Martin Möschter, who grew up in Grafenwöhr and now works on base.

As a child, Ms. Orr would hear the rumble of tanks as they passed by the kindergarten she attended just outside Vilseck. The children would run to the curb hoping that the soldiers would throw them chocolates or gum, she said.

As an adult, she married an American soldier and moved to the United States for several years, before returning to the region where she grew up. Now divorced, she owns her own home in the village, but worries that if the base were to close, she would be forced to sell it.

Mr. Dagner said he worries about the growing number of attractive base jobs that are not filled by locals when someone retires, or that require a security clearance that only a U.S. citizen can acquire. Yet at the same time, the Americans are desperately seeking highly skilled workers, including engineers, mechanics and I.T. specialists.

“It is not possible to offer the levels of pay increases and career development that can be achieved at a company like Siemens,” Mr. Dagner said, referring to the German engineering giant. “They can offer a whole other level of possibilities than we can.”

On top of that, the uncertainty resulting from Mr. Trump’s moves has made it even harder to fill open positions, he said. U.S. Army Garrison Bavaria, to which Rose Barracks belongs, has more than 130 jobs available to local people — from food service and delivery staff, to mechanics and engineers — that are unfilled. Many have been so for months.

“Many young people no longer see the Army as a reliable employer, given all of the uncertainty surrounding the announcement,” Mr. Dagner said.

In keeping with German employment law, all jobs on base are covered by wage agreements negotiated by a labor union and representatives of NATO and its member governments.

“These are good jobs at good wages,” Mr. Schertl said. That has translated into the Army becoming the biggest employer in the region, providing work for some 2,500 local residents and contributing $85.7 million to the local economy.

Even if the Second Cavalry were to remain in town, Mr. Schertl said that after the upheaval of the past year, his focus in the coming years would be on diversifying Vilseck’s economy to ensure job security in the long run, no matter who is in the White House.

Like many Germans in the area, he says the worst-case scenario would be for Americans to switch from housing one unit at Rose Barracks for many years, to rotating units through for short periods. In that case, the troops and their families would not be around long enough to require local goods and services — but long enough to hold earsplitting live-fire exercises.

“The agreement has always been in exchange for that, we have good solid jobs and cross-cultural exchange,” Mr. Schertl said. “If those were to go and just the noise and filth remain, it will be harder to maintain the levels of support that we have now.”

Leon Black to Step Down as Apollo’s C.E.O. After Firm Finds More Payments to Jeffrey Epstein

An ‘Unprecedented’ Effort to Stop the Coronavirus in Nursing Homes

Trump’s ‘Law and Order’: One More Deceptive Tactic Is Exposed

Leon Black to Step Down as Apollo’s C.E.O. After Firm Finds...