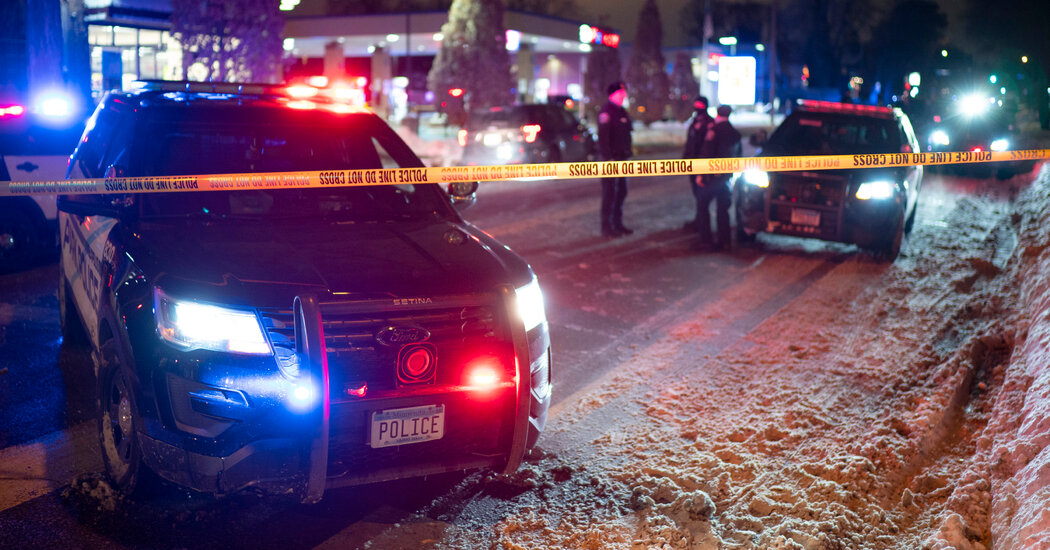 A Minneapolis police officer killed a man in an exchange of gunfire during a traffic stop on Wednesday evening, the police chief said, the first killing by a member of the department since George Floyd’s death in May. Protesters quickly descended on the snow-covered scene, and city officials begged them not to revive the unrest that left parts of the city aflame in the spring.

Chief Medaria Arradondo said at a news conference that witness statements indicated that the man had first fired at the officers after they stopped the car he was driving around 6:15 p.m., less than a mile from where Mr. Floyd was killed. At least one officer then returned fire, he said, killing the man.

Chief Arradondo vowed to release footage from the officers’ body cameras on Thursday.

Many of the details about the shooting remained murky late into the night, but fresh on protesters’ minds was Mr. Floyd’s death, seven months earlier, which led to large demonstrations and criminal charges against four officers including one facing a count of second-degree murder.

As a crowd of about 100 people assembled outside of a gas station near the shooting, city officials pleaded with them to protest peacefully. Over several days of unrest in May, people burned down a police station and set several businesses ablaze, including a pawnshop where the body of a man was found weeks later.

“We cannot allow for destructive criminal behavior,” Chief Arradondo said. “Our city has gone through too much.”

By about 1 a.m., as temperatures neared single-digits, many of the protesters had left the scene.

Chief Arradondo said members of a police team that handled search warrants, drug investigations and other operations had pulled the driver over on Wednesday because they believed he had committed a felony, but the chief said he did not know what the felony was.

The driver, who was not immediately identified, was pronounced dead at the scene, and an adult woman who was in the car with him was not hurt. No officers were injured, the chief said, and he did not know how many had fired their weapons.

A police spokesman said he did not know the race of anyone involved.

The traffic stop happened near a street corner in the Powderhorn neighborhood, and one photograph on social media showed several police cars surrounding a white sedan in a parking lot, the scene framed by yellow police tape. The police blocked traffic from driving down the street, Cedar Avenue, for several blocks.

The Minnesota Bureau of Criminal Apprehension is leading the investigation into the police shooting, and a spokeswoman said the state agency would provide more information after it had interviewed witnesses and officers.

Mr. Floyd died on May 25 after three Minneapolis police officers pinned him to the pavement outside of Cup Foods, a convenience store. The officers, as well as a fourth at the scene, were fired the next day, but protests in Minneapolis grew for several nights until prosecutors charged Derek Chauvin, the former officer who held his knee on Mr. Floyd’s neck, with second-degree manslaughter and third-degree murder.

Prosecutors soon added a second-degree murder charge against Mr. Chauvin and also charged the three other officers at the scene with aiding and abetting him. All have pleaded not guilty; a trial is set for March, but a motion from some of the officers’s lawyers to delay the trial is pending.

Mayor Jacob Frey said in a statement on Wednesday night that transparency after the shooting was necessary to rebuild trust between the police and people of color.

“We must all be committed to getting the facts, pursuing justice and keeping the peace,” he said.

Trump, in Georgia Before Tuesday’s Election, Can’t Let Go of the Last One

This Is Where I Stand