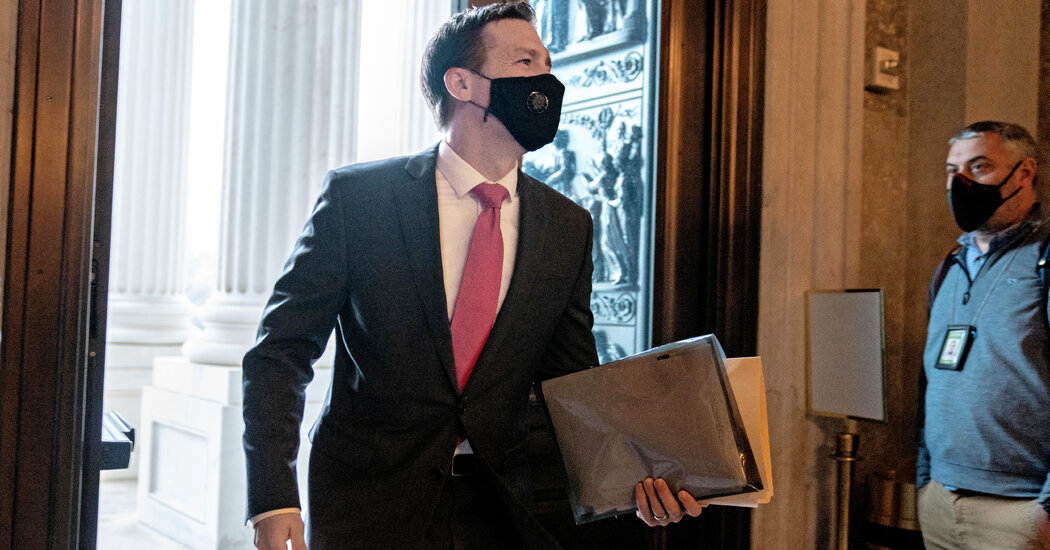 WASHINGTON — Senator Ben Sasse on Thursday eviscerated a drive by his Republican colleagues in Congress to challenge the results of the 2020 election, rebuking the effort as a “dangerous ploy” led by lawmakers who are “playing with fire.”

In a blistering open letter to his constituents, Mr. Sasse of Nebraska became the first Republican senator to publicly condemn a decision by Senator Josh Hawley to challenge President-elect Joseph R. Biden Jr.’s victory, saying it was intended to “disenfranchise millions of Americans.”

“Let’s be clear what is happening here: We have a bunch of ambitious politicians who think there’s a quick way to tap into the president’s populist base without doing any real, long-term damage,” Mr. Sasse wrote. “But they’re wrong — and this issue is bigger than anyone’s personal ambitions. Adults don’t point a loaded gun at the heart of legitimate self-government.”

Mr. Sasse’s scathing remarks came a day after Mr. Hawley, Republican of Missouri, announced that he would object to Congress’s certification of the Electoral College results on Jan. 6, the final procedural step in affirming Mr. Biden’s victory.

Mr. Hawley’s move ensures that the process, usually a formality, will force up-or-down votes on the House and Senate floors, requiring lawmakers to either show loyalty to President Trump and object to the results or protect the sanctity of the electoral process.

There is almost no chance that the effort, led by Mr. Hawley in the Senate and a small group of Republican lawmakers in the House, will succeed in reversing the outcome. But Mr. Hawley’s decision to challenge the results has exposed the rift in the party between those anxious to move on from Mr. Trump’s false claims and those clamoring to meet the president’s demand.

Mr. Trump has continued to falsely claim that Mr. Biden unfairly won the election as a result of widespread voter fraud and has demanded that congressional Republicans work to overturn the results. Attorney General William P. Barr acknowledged this month that the Justice Department had uncovered no voting fraud that would have changed the results of the election and the Supreme Court, as well as courts in at least eight key states across the country, has refused or rejected challenges waged by the Trump campaign in an attempt to throw out the results of the election. Those challenges have not come close to overturning the results in a single state.

While a steady stream of House Republicans have announced their willingness to object to the electoral votes of critical states, Mr. Hawley is the first senator to do so. He hinted on Wednesday that other senators could soon join his effort, telling reporters “a number of offices have reached out via staff to ours and said, ‘We’re interested.’”

On Thursday, he blasted out a fund-raising pitch highlighting his plan. “We must ensure that one vote means one vote in America,” read the message, which was positioned alongside a photo of Mr. Hawley and Mr. Trump. “I plan to object to the results of the Electoral College on Jan. 6th, but I need your help.”

It is unclear how many — if any — of his Senate colleagues will rally to his side.

But it is already creating something of a test for Republicans and their allies, who are being forced to take sides and either back Mr. Trump or reject his efforts to overturn the election.

His announcement on Wednesday was met with a distinct lack of enthusiasm in many conservative circles. This month, Senator Mitch McConnell, Republican of Kentucky and the majority leader, discouraged lawmakers from objecting to the results, arguing that a challenge would force senators to go on the record either defying Mr. Trump or rejecting the will of the voters.

The Wall Street Journal’s editorial board called it a “kamikaze mission” this week and said “Republicans should be embarrassed by Mr. Trump’s Electoral College hustle.”

The New York Post, which supported Mr. Trump for years, proclaimed on Monday: “Give it up, Mr. President — for your sake and the nation’s.”

Mr. Hawley’s objection will force the Senate to debate his claim for up to two hours, followed by a vote on Mr. Biden’s victory. With every Senate Democrat expected to certify the election, along with at least several Republicans, the Senate is likely to affirm Mr. Biden’s victory. The House, which must also conduct the same vote, is controlled by Democrats, making certification a certainty.

Senator John Cornyn, Republican of Texas, said he was “curious to see” the evidence driving the objection, but expressed skepticism at the effort, noting that a slew of courts had already overturned challenges from the Trump campaign.

“There’s a lot of things I don’t want to happen that happen,” Mr. Cornyn said. “So you just got to learn to deal with it. And I think this is one of them.”

“I question why he is doing it when the courts have unanimously thrown out the suits that the president’s team have filed for lack of credible evidence,” said Senator Susan Collins, Republican of Maine. “Senator Hawley is a smart attorney who clerked for the Supreme Court so he clearly understands that.”

Senator Ron Johnson, Republican of Wisconsin, who has questioned whether Mr. Biden fairly won the election and is often eager to wade into battles demanded by Mr. Trump, said he was supportive of Mr. Hawley’s effort but would not join him in objecting. He left open the possibility that he would vote to support the objection.

“There’s no reason for more people to object,” Mr. Johnson told reporters. “All it takes is one. But I’ll support his efforts and support the efforts of the conference” to “hear the issues.”

House Republicans have been more eager to challenge the results. On Thursday, eight Republican members of Pennsylvania’s congressional delegation announced that they would challenge Mr. Biden’s electoral votes, citing the use of election procedures they claim were unauthorized by state legislators. Pennsylvania’s Republican state legislators also wrote to Mr. McConnell on Thursday urging him to “dispute the certification until an investigation is completed” into allegations of election law violations.

Representative Adam Kinzinger, Republican of Illinois, said he believed that more than 100 Republican lawmakers could ultimately vote to sustain the objections in the House. This month, 126 Republican lawmakers in the House including the party’s leader — making up more than 60 percent of the conference — joined a legal brief supporting an extraordinary lawsuit seeking to overturn Mr. Biden’s victory, and dozens have already signed onto the effort to challenge the results on Jan. 6.

Mr. Kinzinger, a vocal critic of attempts by Mr. Trump and his allies in Congress to overturn the election, said on “The Bulwark Podcast” that he hoped his colleagues would prove him wrong.

“I’m just over the undermining of democracy and the frankly massive damage that’s being done with this,” Mr. Kinzinger said.

Some of his colleagues have agreed that the effort amount to an inappropriate undertaking. Representative-elect Nancy Mace of South Carolina told The Post and Courier that she would not vote to overturn the results. “I do not believe that Congress knows better than voters or better than the states,” she said.

But more House Republicans announced on Thursday that they would support the drive, and none came forward to condemn it. Four members of Missouri’s House delegation followed Mr. Hawley’s lead, acknowledging in a joint statement they knew the effort would ultimately fail.

“We have no illusions about the outcome, at the end of the day, this is still Nancy Pelosi’s House,” they wrote. “Our only hope is that more will join us — that more will value protecting the vote of every American living in their state as much as we do fighting for yours.”

Other lawmakers, led by Representative Louis Gohmert of Texas, are trying a different tactic to try to block Mr. Biden’s victory. They have filed a lawsuit against Vice President Mike Pence that tries to invalidate the 1880s law that governs the Electoral College vote, a move aimed at getting a judge to inform Mr. Pence that he does not have to accept the electoral votes.

The judge has requested that Mr. Pence respond to the lawsuit by the end of business on Thursday.

One week in, the Biden administration is building its staff and tackling its agenda.